Driscoll's
Published 3 years ago. About a 7 minute read.
Image: Annie Jiao/Unsplash
Sponsored Content / This article is sponsored by Driscoll's.

While California’s recent drought is officially over, more intense rainfall means more rain is running off, rather than soaking into the ground. But what if some of this water could be collected to help recharge thirsty aquifers and mitigate the effects of overdraft?

At Driscoll’s, we’ve long advocated for responsible and collaborative solutions to groundwater management, and seek to grow in harmony with our communities. Water is a shared resource, and we all must work together at the local level to ensure it’s being managed well to keep our communities, businesses and ecosystems healthy for generations.

That’s why, over the past few years, we’ve been working with UC Santa Cruz, the Resource Conservation District of Santa Cruz County, the Pajaro Valley Water Management Agency, and an independent grower on the Bokariza-Drobac stormwater infiltration system — an innovative groundwater-recharge project in the Pajaro Valley.

Yet the Pajaro Valley maintains a California coastal climate, with wet winters and dry summers. Farmers in the area rely heavily on underground aquifers to irrigate crops; groundwater provides some 96 percent of the water used by farmers in the area. This region has experienced groundwater “overdraft” for decades, where more water is taken out than is replenished naturally. This can lead to a slew of environmental consequences, including higher energy use to pump water from deeper wells, sinking lands, and reduced streamflow and water quality. In coastal regions such as the Pajaro Valley, overdraft can draw in seawater, which reduces water quality through increased salinity. This is one of the most pressing water stewardship challenges in the Pajaro Valley.

While California’s recent, years-long drought is officially over, climate change will make California’s climate even more unpredictable moving forward. As our CEO, J. Miles Reiter, recently wrote in the Santa Cruz Sentinel: “The single greatest risk to the future of farms in California is a severe lack of water.”

Climate change is expected to cause more years of too much or too little rain. More intense rainfall means more rain is running off, rather than soaking into the ground.

But what if some of this water could be collected to help recharge thirsty aquifers and mitigate the effects of overdraft? The Bokariza-Drobac stormwater infiltration system, which Driscoll’s supports, aims to do just that while benefiting landowners and tenants.

In 2010, it came to our attention that there was an existing sizable basin which was already being used to accommodate excess stormwater. The Bokariza site sits on privately owned farmland which already has a natural formation collecting runoff.

Driscoll’s and Aptos Berry Farms approached the project partners — which include landowners, academia and public agencies — to determine if the location would be suitable for a managed aquifer recharge project. Managed aquifer recharge is the intentional recharge to aquifers for subsequent recovery or environmental benefit. This is used in conjunction with demand management to help avoid overdraft.

“Looking for innovative ways to maintain the long-term sustainability is a top priority for us at Driscoll’s,” says Emily Gardner, district environmental manager at Driscoll’s. “Recharge basins can’t be installed everywhere; and we saw this as an opportunity to take advantage of a naturally occurring swale, where farming was difficult due to flooding.”

A ‘swale’ is a natural remnant that has been cut through by old flows from another river, which can function as a collection basin for recharge. The hope was that, through the Bokariza Infiltration Basin, some of this runoff could be collected and put into the ground. 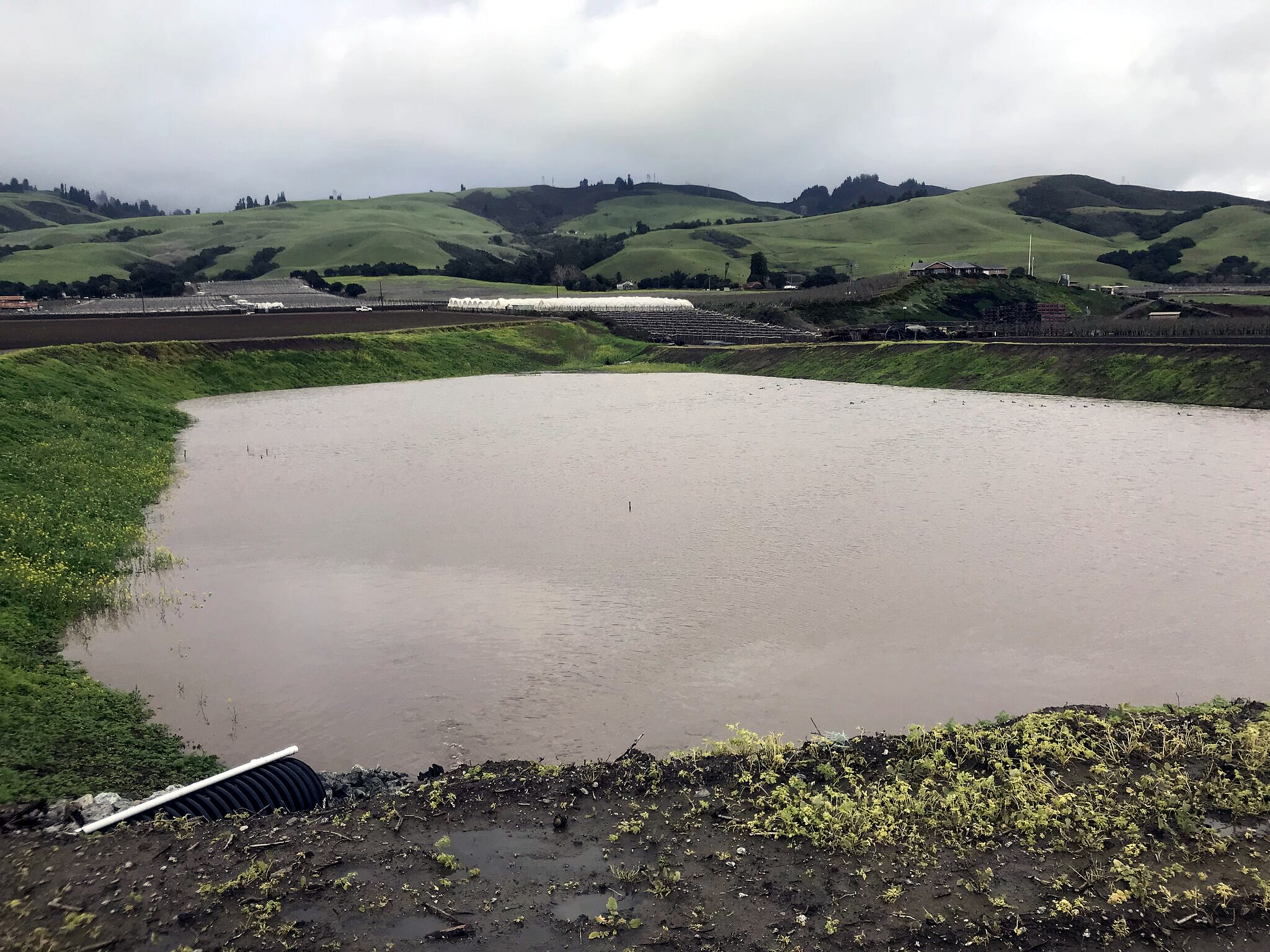 The National Resource Conservation Service — an agency of the US Department of Agriculture that provides technical assistance to farmers and other private landowners and managers — surveyed the basin and surrounding drainage area to determine the basins geometries, basin drainage area and the expected flows from this area, given soil type and slopes. The Resource Conservation District of Santa Cruz County navigated the permit-coordination process and collaborated on modifying the system design. Meanwhile, Andy Fisher, a professor in the Earth & Planetary Sciences Department at UC Santa Cruz; and Marc Los Huertos, an associate professor at CSU Monterey Bay, developed a mobile percolation test rig to test the infiltration rates of the basin. The results showed the possibility of significant infiltration if there was enough water supplied to the basin. In short: The basin was a good candidate for a recharge project.

Before the project could become a reality, the landowners and tenant first needed to be brought on board. Aptos Berry Farms, the tenant, would continue to pay rent for the area where the recharge is occurring. Land is at a premium for farmers and farmland owners, and many are understandably reluctant to sacrifice space. And, as a first-of-its kind project, there was no precedent to show that it could succeed.

The landowners ultimately embraced the concept of collecting stormwater as an opportunity. They understood the importance of augmenting the groundwater supply for long-term sustainability.

“We are incredibly grateful to the landowners and the tenants for their interest at Bokariza,” says UC Santa Cruz’s Fisher. “There’s no way to do a project like that without them, without folks who want to be partners in the process.”

Ultimately, Driscoll’s, Aptos Berry Farms and our partners created this project and helped to address community water resource concerns. The goal was to maximize drainage to the basin while avoiding high-cost options, wetland delineations or taking additional land out of production.

An additional aim of the Bokariza Infiltration System is to improve water quality as it infiltrates into the ground.

"As we ramp up groundwater-recharge efforts, it's important to avoid contributing to problems with water quality,” Fisher says. “If we're putting good-quality water into the ground, it will dilute any contaminants that are already in the groundwater."

Fisher, students and colleagues secured federal, state and private funding in support of measurements of water quality and are testing methods for removing contaminants as the stormwater infiltrates through shallow soils.

Driscoll’s and Aptos Berry Farms helped defray some of the project costs by funding the process and construction. This included financing the installation of infrastructure to capture the water, as well as maintenance until a new water bill rebate program could begin to offset some of the costs.

Fisher was instrumental in helping to address one of the project’s biggest challenges: The economics. He developed a program of “recharge net metering (ReNEM),” similar to what already exists for renewable energy projects, to help landowners recover the costs of maintaining groundwater-recharge basins on their property. In essence, landowners receive a rebate on their water bill for water recharged into underground aquifers.

The ReNEM project officially kicked off a five-year pilot in 2016 through a collaboration between Pajaro Valley Water Management Agency, UC Santa Cruz and the Resource Conservation District-Santa Cruz County.

“We are trying to use the Bokariza project as a template, so that other locations can build similar systems,” Fisher says.

The program has resulted in payment of rebates by the Pajaro Valley Water Management Agency to cover maintenance costs. The size of the rebate depends on the annual performance of individual recharge projects. The outcome of the ReNEM pilot project is to determine if the rebates are enough to cover costs.

A successful effort to date

So far, the results have been promising. In 2017, UC Santa Cruz reported that the Bokariza Recharge Basin achieved 140 acre-feet of net infiltration – that’s 45.6 million gallons.

The Pajaro Valley Water Management Agency issued Aptos Berry Farms a check for $14,210, which ultimately gets passed on to the landowner. The irrigation water demand at the ranch is between 100 and 125 acre-feet per year, Aptos Berry Farms estimates — meaning the recharged water is more than mitigating their water use.

“As we face climate change, finding new and innovative ways to get surface water into the groundwater basin will become increasingly important,” says Brian Lockwood, general manager at Pajaro Valley Water Management Agency. “Projects like this help achieve that goal with improved resilience.”

To learn more about our water stewardship commitments, and for another example of how we’re collaborating to collectively reduce our water impact through the AgWater Challenge, click here.