Inspired by nature, SolarBotanic’s solar trees use leaf-shaped, thin-film, photovoltaic nanotechnology to harness both sun and eventually wind energy to power houses, charge EVs or be stored for future use.

As the planet warms at an unprecedented rate and the burning of fossil fuels continues to produce over 75 percent of global greenhouse gases, a successful global transition to renewable energy is one of the biggest and most pressing challenges humanity has ever faced. While energy giants are gradually dipping their toes into R&D for renewable solutions, an explosion of practical innovations — particularly around solar technologies — has come from startups including BioLite and Sunlit Sea.

Now, UK-based solar energy company SolarBotanic has joined the fray with its reimagining of the traditional solar panel design — usually involving square, blue panels which are either fitted on people’s roofs or neatly organised in rows covering an expanse of land — into that of an aesthetically pleasing, highly efficient Solar Tree. After five years of R&D, the company confirms that the trees are ready to be mass-produced, at an affordable price, for commercial use.

“Accelerated climate change is the result of our reliance on polluting fossil fuels, and is one of the biggest threats to humanity,” Harry Corrigan, founder and Executive Chairman of SolarBotanic, told Sustainable Brands®. “A shift to net-zero energy technologies is critical if we are to avoid catastrophe — our Solar Trees help contribute to the much-needed net-zero system.”

Taking a cue from the way trees and their leaves move, the Solar Trees absorb energy through flexible, leaf-shaped, thin-film photovoltaic (PV) solar cells and have been engineered with thousands of microcircuits that are activated when the sun shines. The company is exploring further use of nanotechnologies that will allow future generations of the trees not only to convert light into energy, but also wind — thanks to the stems and twigs that have been incorporated into the design of the trees, which generate electricity when they move.

“Energy storage can be embedded in the tree and is charged in periods of abundant renewable energy generation,” Corrigan explains. “The system can rely on the energy stored to provide power when the sun and wind are not available.” 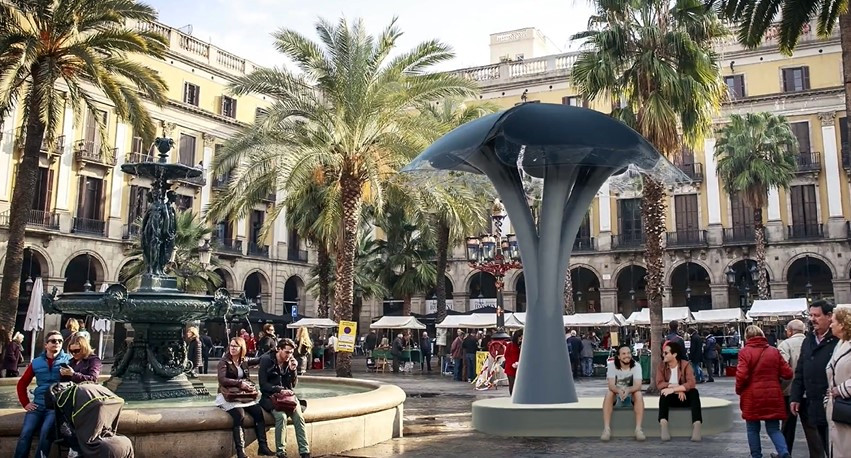 A mock-up of a Solar Tree in a town square | Image credit: SolarBotanic (video still)

The dome shape of the tree is designed to capture as much sunlight as possible, whilst the space underneath allows for the area to still be used — for example, to park a car, grow sciophilous (shade-loving) plants or provide shaded seating areas.

The first-generation trees have been designed primarily for the rapid Electric Vehicle charging market for homes, businesses and commercial car parks — where solar power can be captured and stored at charging points. Aside from the initial EV charging stations, SolarBotanic has a goal of making its trees available for homes — anAI-driven Energy Management System incorporated into the design allows the trees to be linked and form part of a local grid, or feed into the main grid.

“This feature helps to optimise energy storage and is crucial as we progress towards a more electrified future,” Corrigan says.

As with all solar panels, the sunnier the climate, the more energy each tree will produce. SolarBotanic is hoping to produce 3,400kWh of electricity per year in London, from the first-generation solar tree — each of which has a power-generation capacity of 5 kW.

“The amount of energy generated from each tree is dependent on where it is ‘planted,’ Some locations will produce more energy than others, which is inherent to the way the technology works. For changing weather conditions, we provide the option of having a battery embedded in the trunk of the tree for energy storage to provide power at a later time,” Corrigan says. “For locations where there is less potential to generate energy from the sun, the tree can be easily coupled to other trees or conventional solar panels to increase the power capacity.”

SolarBotanic trees have the capacity to supply a single household or can be installed in areas where naturally growing trees would previously have been used (i.e., along motorways, in suburban streets, parks, etc), and can make a significant contribution to a national electrical grid. Just as thousands of conventional solar panels can be connected to create a solar farm, SolarBotanic’s trees can be ‘planted’ together to create solar forests.

SolarBotanic believes in the power of collaboration and is partnering with companies — including EV charging providers, property developers, renewable energy companies, public car park operators, service stations and homeowners’ associations — that share its values, mission and vision, in order to scale smartly. The first SolarBotanic trees are expected to become available in early 2023.

Over the next five years, Corrigan says SolarBotanic will seek additional investment to further develop its technology, so that it can come in a variety of shapes and forms — all to continue its mission to reduce energy costs and carbon emissions while also creating an aesthetically pleasing environment.