Published 3 years ago. About a 7 minute read.

First-of-its-kind biometrics research from Porter Novelli/Cone shows that 79% of US consumers feel a deeper personal connection to companies with values similar to their own.

US consumers are more likely to have a positive image of (89 percent), trust in (86 percent) and be loyal (83 percent) to brands that lead with Purpose, according to the 2019 Porter Novelli/Cone Purpose Biometrics Study. This first-of-its-kind biometrics study examines not only what consumers say they will do to support responsible brands, but also how they feel and physically react when exposed to Purpose-driven messaging.

“After tracking consumer data for more than 25 years, we’re confident the consumer appetite and demand for Purpose-driven brands continues to be strong,” says Brad MacAfee, CEO of Porter Novelli. “However, in this study, we wanted to explore the power of Purpose in creating deeper emotional connections with consumers, that then inspire them to act.”

Following 2018 research that confirmed Purpose as one of three critical dimensions of overall brand reputation, this latest research combined an online study of more than 1,000 US adults with the results of biometrics testing among a select group of respondents. It measured facial, heart rate and skin conductance impulses that captured levels of emotion, attention and arousal/stimulation upon viewing a randomized set of advertisements. Respondents viewed two ads from the same brand — a Purpose-driven ad (e.g., support of a social issue, responsible business practice) and an ad focusing on the functional attributes of the product. The research found that Purpose-driven messaging has a greater ability to capture the physical and emotional attention of respondents compared to functional narratives.

Purpose messages evoke demonstrable heightened physical responses; the results of the biometrics study found the Purpose-driven ads were most effective in two out of three brand categories tested — with higher levels of attention, emotion and arousal from these ads overall. Further, when the ads’ narrators homed in on the aim of each ad — either sharing the product attribute/functional message or Purpose-driven message, the Purpose narrative outperformed among all three ad sets — with increased attention and arousal; and in some cases, more positive emotion. In comparison, during the functional narratives, attention wavered, arousal often decreased and in one instance, respondents felt a negative emotion bordering on annoyance.

By leading with Purpose and connecting with consumers on shared values, companies are poised to build significant and lasting relationships with individuals. Nearly eight-in-10 (79 percent) US consumers surveyed say they feel a deeper personal connection to companies with values similar to their own. And, nearly three-quarters (72 percent) believe Purpose-driven companies care about them and their families more.

During the biometrics survey, when asked about each of the ads they were exposed to, participants overwhelmingly felt better about the companies behind the Purpose-driven ads. Respondents also felt the Purpose-driven advertisements were more unique; and in two-out-of-three instances, inspired more trust. The exception to this rule was an automotive ad, where a narrative around functional and safety features led respondents to trust the car brand more. However, in all three cases, respondents readily agreed they felt a more positive emotional connection to the brands behind the Purpose messages.

“Through conducting biometrics research, we see the power of Purpose messages to break through and resonate with consumers on a deeper level,” says Alison DaSilva, EVP of Purpose at Porter Novelli/Cone. “Purpose-first communications spark an often-unconscious physical reaction by speaking to the hearts and minds of consumers, ultimately forming deeper emotional connections by appealing to individual values and what matters most.”

The emotional connections formed by leading with Purpose inspire individuals to promote the brand in many ways:

These ardent supporters are also keen to support Purpose-driven companies even in tough times. 75 percent of consumers said they’d be more willing to forgive a company if it makes a misstep, and the same amount would defend that company if someone spoke badly of it.

The biometrics research proved Purpose-driven ads also led to greater propensity for respondents to become advocates of the brand. In all three ad sets, respondents said they’d be more likely to talk about the ad and the brand with friends and family, and share and discuss it on social media. 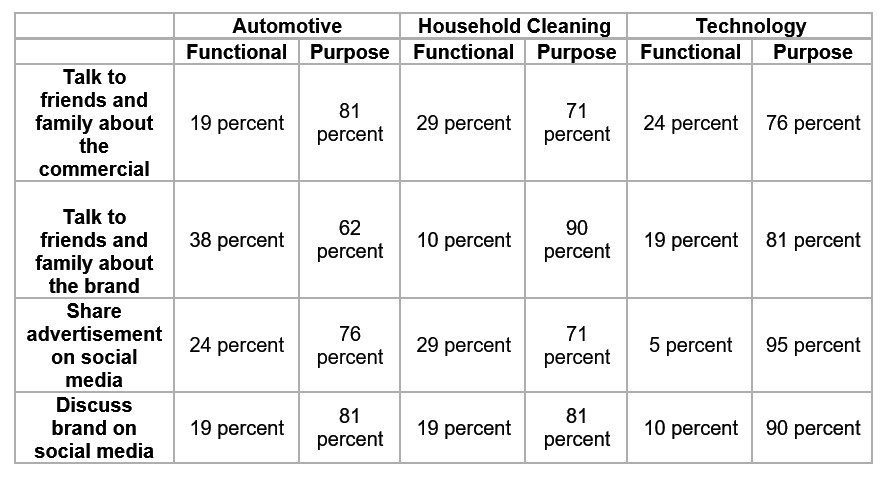 US consumers indicate support of Purpose-driven companies in ways that will directly impact a company’s bottom-line — as nearly nine-in-10 (86 percent) say they are likely to purchase from these companies. Beyond using their wallets, Purpose becomes a key consideration in where to work and what companies to invest in. Consumers in the US are motivated to support these companies in the following ways:

Here, the biometrics research produced divergent results. When asked about the propensity to purchase, biometrics participants felt they’d be more likely to choose the ad featuring the product attributes in two of the three categories.

“When a company authentically communicates and delivers upon its Purpose, it will capture the hard-to-secure attention, favorability and trust of consumers. But it alone won’t trigger a sale,” DaSilva says. “Companies must find the right balance of sharing both their Purpose and functional product benefits to drive purchase. Equally important is that these messages are backed up with strong programs and policies. Consumers will do research and due diligence to make sure a company claiming it leads with Purpose is walking the talk and living upon those values — both internally and externally.”

There’s a clear reason people in the US feel a strong sense of loyalty toward companies that pursue Purpose. Nearly three-quarters (73 percent) of US consumers say that in today’s uncertain social and political times, they feel an urgency to support issues in every way they can. And that sense of urgency is filtering into the brands consumers want to engage with. In fact, 72 percent of US adults surveyed say they feel it is more important than ever to buy from companies that reflect their values. And supporting these organizations helps the public feel they are contributing to issues that are important to them:

This push to support companies with values that align with our own also contributes to a shift in how we view businesses’ role in society evolving. Today, more than three-quarters (76 percent) of US consumers believe it is no longer acceptable for companies to just make money; they expect them to positively impact society, as well. And although the majority believe companies should address issues that impact — or are impacted by — the business directly, such as the environment or human rights, the scope of a responsible business also extends beyond this. US consumers believe companies should address:

“In a time where consumers feel a heightened sense of urgency to address the issues they see as critical, they are looking to embrace brands that share those same values,” MacAfee says. “Now more than ever, brands that lead with Purpose can connect with consumers on the values that matter most to them — forming an emotional connection that builds deeper bonds, inspires brand advocates and ignites action that transcends any transactional relationship.”