Recognizing the urgent need to hold travel brands and destinations accountable for their lack of diversity in travel marketing and storytelling, the Black Travel Alliance was formed practically overnight to support Black content creators and increase representation in the industry.

In the days following the violent death of George Floyd, companies across all industries posted black squares to their social media accounts and declared their intentions to “do better” regarding diversity. Almost immediately, backlash against this performative allyship surfaced. It’s one thing to link your brand to an overdue and essential movement; but it’s quite another to turn words into action, social media into social impact, and intentions into an investment in time, training and talent.

Recognizing the urgent need to hold travel brands and destinations accountable for their lack of diversity in travel marketing and storytelling, the Black Travel Alliance (BTA) was formed practically overnight to support Black content creators and increase representation in the travel industry.

The global organization launched June 10. On June 16, it announced its #PullUpForTravel campaign, giving travel brands and destinations until June 19 (Juneteenth) to publicly provide data related to diversity in employment, conferences and tradeshows, paid advertising and marketing campaigns, press and philanthropy. 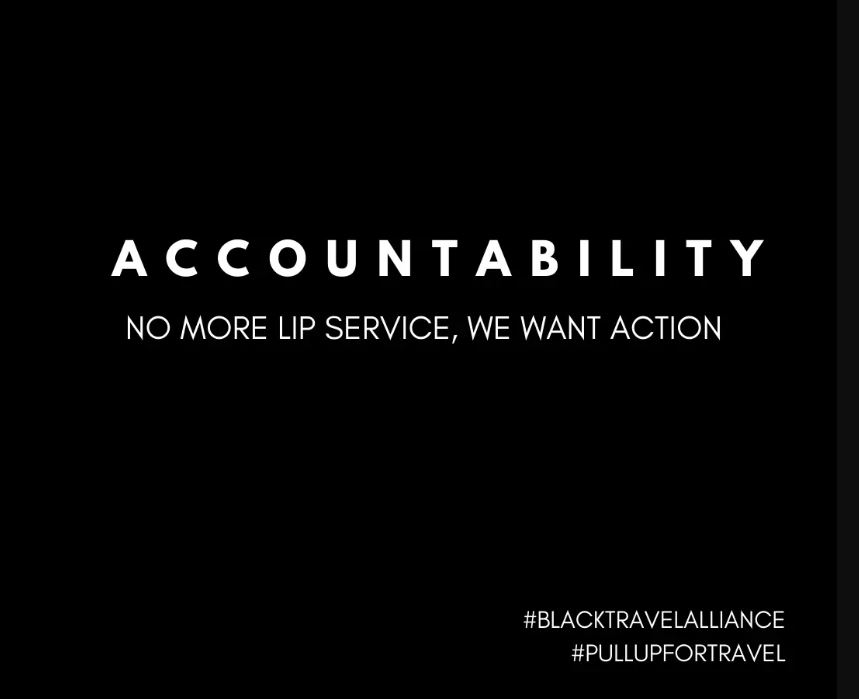 “We knew it was bad. We didn’t need to see the data to know that much improvement is needed, but it was important to have that data there,” Martina Jones-Johnson, a BTA founding member and board officer, and content creator at That Couple Who Travels, told Sustainable Brands.

“We appreciate the Black Travel Alliance putting its recent call out to the tourism industry to open a dialog about what travel organizations are doing and how they are tracking DEI work,” said Megan Conway, chief strategy officer for Travel Portland, Oregon, which responded to #PullUpForTravel with detailed information. “Being transparent about where we are is the first step, and we are hoping the travel industry at large can help us determine where to go next. Establishing best practices and standard DEI metrics for destination marketing and management organizations like Travel Portland will be important for the industry’s future.”

It is easy for companies to say they want to do better with their DEI efforts, and it’s never too late to get started. Regardless of the industry in which they operate, companies can start today by focusing on these areas:

If DEI hasn’t been part of a company’s ongoing efforts, being mindful of it in each and every aspect of an organization can feel overwhelming. Seeking someone out who can help put commitments into action gets the ball moving in the right direction. This may be an outside consultant brought in to assess current efforts, establish benchmarks, offer guidance and check in on progress. However, depending on company size and budget, it is ideal to hire someone internally to lead diversity efforts and enforce a culture of inclusion.

“Employment is key. That is one of the most important KPIs, because when you have a Black person in the room, they can help influence the conversation and help you understand gaps you don’t recognize,” Jones-Johnson said.

Further, she emphasized, people shouldn’t just lean on the Black people in their lives to offer guidance for free. “It takes a toll sometimes, yet they want to help. But they need to be paid for their time.”

To help increase Black representation in the travel space, founding members of the BTA knew they had to have a baseline of where travel companies were at in order to hold them accountable for their stated commitments. This also gave organizations a chance to internally review efforts so they could set specific goals for improving diversity within the workplace. “Travel Portland has been committed to DEI internally for a number of years, but this was the first time anyone requested data from us publicly,” Conway said.

“If your goals are not explicit with benchmarks and deadlines, it will definitely fall to the wayside,” said Priya Jindal, founder of Nextpat and a consultant who helps organizations align their diversity commitments with action. “We have done business in the same way for a long time, and asking people to take on another thing — especially self-awareness — without the requisite accountability will ultimately lead to failure.”

Be transparent on progress

One of the best ways for companies to hold themselves accountable is to make diversity a priority and be transparent in their progress on a quarterly basis.

“Share your current status, where you want to be, and the steps you’re taking to get there,” said Eliza Erskine, founder of Green Buoy Consulting, which helps small and early-stage businesses with sustainability. “Set up a schedule for reporting and stick to it. Reporting doesn’t end.”

This means publicly detailing goals, regularly evaluating them, and sharing progress toward achieving them — even if a company is just getting started. The BTA will follow up with the companies that responded to #PullUpForTravel in one year to see how far they’ve come. However, Jones-Johnson noted many companies that responded didn’t provide specific numbers, making a baseline measurement and progress difficult to gauge.

Don’t try to jam DEI into a company culture that didn’t previously focus on these efforts. Organizations can get stuck in a rut of homogeneity if they aren’t flexible and willing to think of DEI as a valuable addition that helps shape all aspects of the company.

“Striving to be actively anti-racist and free of unconscious bias is something that requires continual and systemic change; in addition to increased staff training, marketing and content auditing,” said Natalie Kidd, chief people and purpose officer at Intrepid Travel — which posted its commitment on June 12, prior to the BTA’s campaign. “The plan is still a work in progress; but having a role dedicated to overseeing purpose is really important to us, to ensure that DEI gets the seat at the table that it deserves.”

Companies also need to realize that diversity isn’t just “nice to have” but necessary for real change to happen. This isn’t something that can be “solved” but something that evolves as time goes on.

“Tackle this challenge with foresight and a vision to be working, growing and improving on this for years to come,” Erskine said. “When you know you have years of work and improvement and wins ahead, it’s easier to tackle the challenge.”

In addition to supporting the Black content creator community, the BTA is available to help the tourism industry in its DEI efforts. Jones-Johnson said the organization plans to hold events for brands and companies that want to learn how to be better allies, do better in integrating diversity and inclusion in their operations, and connect with Black content creators and their followers. It is also developing a database of Black content creators. Companies should take advantage of opportunities like these for ongoing education.

“We hope (these companies) are improving every day, and we see that already,” she said. Companies have taken “immediate steps” by reaching out to the BTA for diversity and inclusion consulting services and suggestions for Black content creators for campaigns. “We’re here to help. We’re going to be helpful to some of these industry leaders so they don’t have excuses as to why they aren’t getting it together.”

JoAnna Haugen is a writer, speaker and solutions advocate who has worked in the travel and tourism industry for her entire career. She is also the founder of Rooted — a solutions platform at the intersection of sustainable tourism, social impact and storytelling. A returned US Peace Corps volunteer, international election observer and intrepid traveler, JoAnna helps tourism professionals decolonize travel and support sustainability using strategic communication skills.