Brands are more willing than ever to take public stands in support of important issues. But while many aren’t much more than social media sound bytes, others go beyond lip service to action.

In recent years, we’ve entered a new age — one in which brands are increasingly willing to take public stands in support of often polarizing issues. When it comes to issues that tear at the fabric of society — such as systematic racism and ongoing police brutality toward people of color — brands now risk appearing tone deaf if they choose to stay silent. But there’s equal risk in issuing platitudes and empty pronouncements — brands that authentically address the unrest and what they are willing to do to help will resonate much more with the public.

Brand responses in the week since George Floyd was senselessly murdered by Minneapolis police have, of course, included a myriad somber pledges of solidarity and social media sound bytes. But as Marc Pritchard, CMO at Procter & Gamble, pointed out during our SB Leadership Summit earlier this week:

“Because we’re in brand-building, our initial instinct is to say something, to post something; [but] the days of ‘my thoughts and prayers are with you’ are over. Action ... [and] listening ... is what’s required.”

So, here, we're highlighting brands that are going beyond platitudes — demonstrating their allegiance by sharing anti-racism resources, calling for new legislation, withdrawing support for complicit organizations, and donating money and services to Black Lives Matter and other nonprofit groups working tirelessly in the name of racial equality and social justice …

In a statement this week, Airbnb said:

“We can’t talk about recent events without also acknowledging the painful truth that some hosts and guests still experience discrimination, something that is the very opposite of our mission to create belonging.”

In 2016, in response to a slew of bias-fueled incidents from guests and hosts alike, the home-sharing giant launched a nondiscrimination policy and community commitment, and removed over 1.3 million people who declined the pledge from its platform.

In light of recent events, Airbnb is now donating a total of $500,000 to the NAACP and Black Lives Matter, as well as matching donations to both groups made from its employees. The company is also publicly sharing an internal Activism and Allyship guide that its Black employee resource group, [email protected], prepared for its team — which references work from activists and experts in antiracism — to help people inside and outside Airbnb to work together to become better and more active allies.

On Tuesday, Bank of America Corp became the first big bank to vow monetary support for address racism in the US, when it pledged $1 billion to help communities across the country address economic and racial inequality. The funds come with a four-year commitment to launch programs such as virus testing and other health services — especially focusing on communities of color, to support minority-owned small businesses, and create partnerships with historically black and Hispanic educational institutions.

Ben & Jerry’s — long a vocal activist brand, speaking out on everything from the climate crisis to voting rights to criminal justice reform — released a detailed statement this week, not only reiterating its support of Black Lives Matter, but also calling for four concrete steps to dismantle white supremacy in all its forms.

As CNN’s Hannah Ziady points out, Ben & Jerry's proclamation stands out from the sea of anti-racism brand pronouncements because it is “unusually comprehensive and direct, addressing the historical roots of discrimination in the United States and calling out systemic racism, while advocating specific policies to prevent further police abuses and redress racial inequality.”

In a statement this week, Lyft co-founders Logan Green and John Zimmer said:

“As part of our continued commitment to communities of color through LyftUp, our transportation access initiative, we're providing $500,000 in ride credit to national civil rights organizations who have been working to facilitate essential transportation and equitable access during the recent crises (National Urban League, NAACP, National Action Network, Black Women's Roundtable and National Bail Fund Network). In Minneapolis, specifically, we will be donating LyftUp ride credit to Lake Street Council to facilitate rides to volunteers assisting with rebuilding efforts. 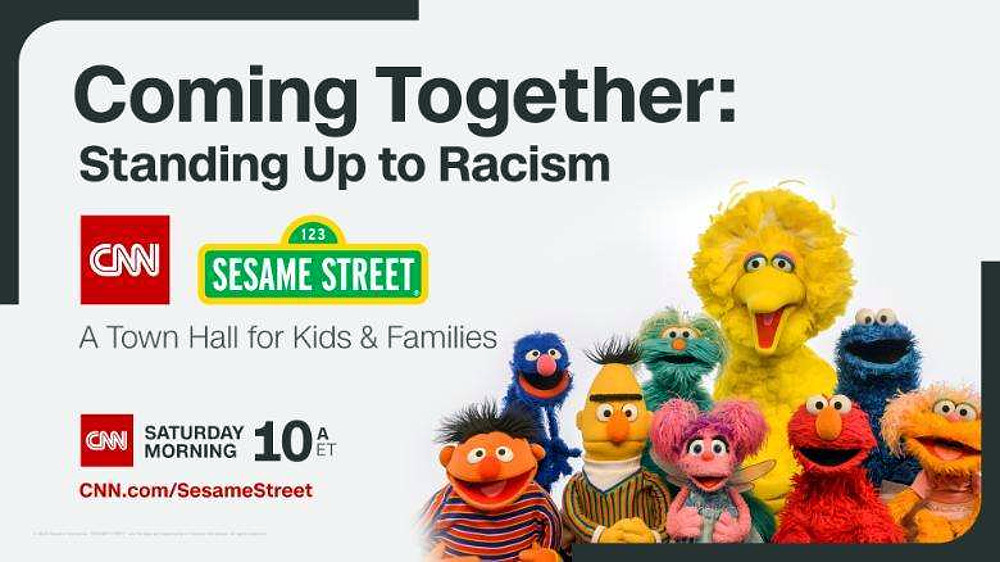 Meanwhile, the “Sesame Street” gang is teaming up with CNN to co-host a town hall to speak to kids about racism. The “Standing Up to Racism” town hall will be moderated by CNN's Van Jones and Erica Hall, along with Big Bird — and fellow “Sesame Street” characters Elmo, Abby Cadabby and Rosita will join experts to answer questions submitted by families.

The special will air on Saturday, June 6, at 10 am ET — on CNN, CNN International, and CNN en Español. It will also stream live on CNN.com and on the CNN app, without requiring a cable log-in.

And Simris, a Swedish producer of algae-based omega-3 supplements, announced earlier this week that it is demonstrating its support for the Black Lives Matter movement by putting its marketing dollars where its mouth is — by ending its paid advertising on both Facebook and Instagram.

As founder and CEO Fredrika Gullfot explained on LinkedIn:

“The current developments have now rendered it morally impossible for us to continue feeding the same hand that complacently offers its services as the major platform for hate-mongering, promotion of violence, and disinformation. The same hand that has also shown to be a major enabler of the racist movement. Through its active refusal to intervene, Facebook has made its stance clear. So will we. As of today, Simris will stop being part of this system and cease our paid advertising on Facebook and its subsidiaries, including Instagram. We understand this puts us at a major marketing disadvantage compared to other brands and products out there. But we also trust that honesty and respect will win in the long run, and trust our friends and community to share our message. While Simris is a mere drop in the ocean, we can and will not continue to enable a sick system with our funds. Instead, we chose to follow the voice in our hearts and trust that love will win in the end.

Still others are demonstrating their support for the cause by donating proceeds from product sales to Black Lives Matter and other racial justice nonprofits … but, ultimately, as Marketing Week’s Mark Ritson pointed out — an arbiter of real, lasting change will be once companies start walking their racial equality talk by diversifying their own leadership.