Product, Service & Design Innovation
How Smart Tech Is Bringing Toilets to the Masses Across the Developing World

Did you hear the story of the little girl in India who called the police to report her dad over a toilet?

Seven-year-old Hanifa Zaara claimed that her father had “cheated” her after promising, and failing, to build the family a toilet if she topped her class at school.

“I have been topping my class since nursery,” she wrote. “I am in the second grade now. And he is still only saying he will do it. This is a form of cheating, so please arrest him.”

Her father told the BBC that he had actually begun constructing a toilet, but did not have enough money to complete it.

Hanifa’s story is a familiar one for millions of people living in the developing world, forced to defecate out in the open — a situation that makes young women in particular feel ashamed. In fact, women and adolescent girls bear the brunt of the effects of the non-existent toilet infrastructure, by risking their dignity and having to adjust their bio-schedules all year round.

But lack of access to clean and functioning toilets is a problem faced by more than 2 billion people worldwide. In India alone, 550 million people defecate out in the open, increasing the chances of diarrheal diseases, particularly among children. Where toilets do exist, a lack of good maintenance, vandalism, improper waste disposal and a fear of being attacked deter many people from using them.

It is a situation the Indian Government is acutely aware of; its Clean India Campaign, launched back in 2014, provided a much-needed impetus. It was the certainly the starting point for Miyank Midha and his wife, Megha, to develop a business to tackle the issue head on.

“There is a real shortage of toilet infrastructure — and this crumbling infrastructure is bearing the load of ever-increasing migrant population from rural areas to urban areas,” Miyank told Sustainable Brands in a recent interview. “The government has relied on conventional brick-and-mortar structure toilet infrastructure for the past many decades, which has resulted in repeated failed implementations with billions of dollars going down the drain.”

The solution as Miyank saw it: a self-sustainable toilet design and business model, which can be scaled rapidly, while addressing the issues related to toilet maintenance — high operational costs and efficient, decentralized waste treatment.

So, that is what the Midhas’ business does: GARV Toilets builds indestructible, stainless steel toilets that are powered by solar panels and feature bio-digester tanks so that they can be located anywhere in the world — even in places that lack the infrastructure to deal with wastewater.

Rather ingeniously, the toilets can be maintained by way of automation. By tracking their usage in real time, knowing when to clean them or fix broken taps becomes much easier. Powered by an Internet of Things dashboard, the business can offer hygiene-related data, too, such as how many people washed their hands after using the toilets — information that can be made available to local governments to inform health education campaigns, for example. 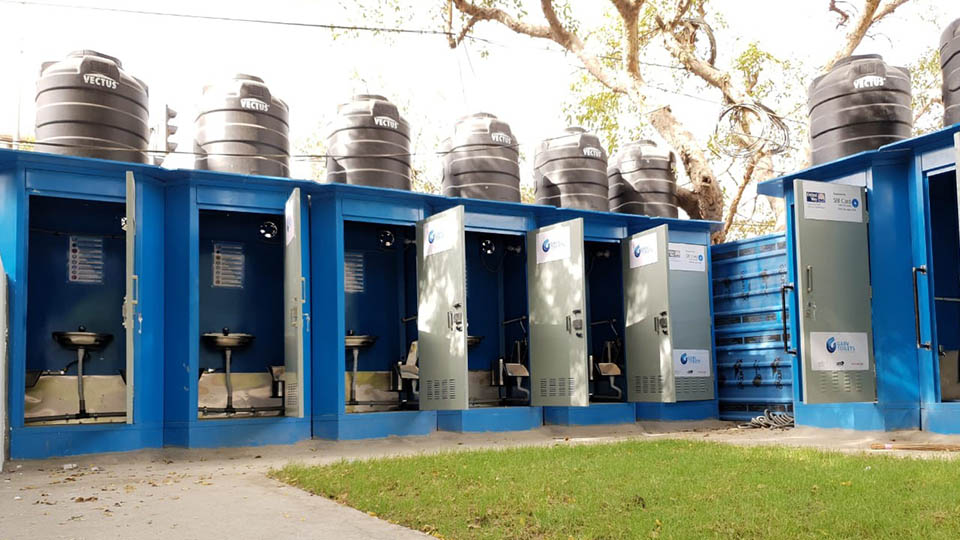 The toilet hubs are either set up in government-aided schools through CSR partnerships; or in urban slum areas, through public-private partnerships with government bodies. A community service kiosk can also be established outside the toilet block, offering multiple services to communities including medical services, micro-health insurance and the roll-out of government schemes.

Operating since 2016, GARV Toilets – one of the winners of the 2018 Unilever Young Entrepreneurs Awards – has installed 348 toilet blocks across India, Bhutan, Ghana and Nigeria. In the next two years, this number is set to rise to 900. And with some 5 million households living in urban slum areas without good access to toilets in India, along with 300,000 government-aided schools needing toilet infrastructure, there is still more to be done. There is also a great opportunity in Ghana, where 75 percent of people rely on public toilet infrastructure, which is now mostly defunct.

“Our solution is not bound by boundaries,” Miyank says. “It is a pre-fabricated modular design which can be easily assembled on site in a few hours.

“Nobody has ever tried to maintain toilets in this way, using smart technology which can also be integrated into traditional and existing toilets, too.”