The microdistiller not only sources grains, fruit and materials from local suppliers — it repurposes as many byproducts of the distilling process as possible, in what’s likely one of the most scalable examples of circularity so far in the spirits business.

While the Upper Midwestern US might not be the first region that comes to mind for sustainable distilling, the work Tattersall Distilling is doing should put it near the top of the list.

The seven-year-old distillery, founded by best friends Jon Kreidler and Dan Oskey, puts local first and is setting a real example for how smaller distilleries can still make an impact without the big budgets of the multinational liquor conglomerates.

“There’s no question that the big guys have teams working on this; but as you get into measuring and quantifying sustainability, there’s certain low-hanging fruit,” Kreidler told Sustainable Brands™.

Oskey and Kreidler, who has the title of “Chief Officer,” have built a philosophy not just around sourcing grains, fruit and materials from a range of local suppliers — but repurposing as many byproducts of the distilling process as possible, in what’s likely one of the most scalable examples of circularity so far in the spirits business.

Farm to glass, and back again

Tattersall operates two locations: a healthy bar & distillery in central Minneapolis; and a brand new, 75,000 sq. ft. flagship facility in River Falls, WI, about 45 minutes east of the Twin Cities. The River Falls facility — which boasts the largest rooftop solar array of any craft distiller in the US — offers the opportunity for the company to scale up production (which currently sits around 300K-500K bottles, according to Kreidler) and continue leveraging the company’s deep connections with grain providers in both states.

When it comes to liquor production, grain and malts are the second most important raw materials, beyond water; and in many cases, that grain simply goes to compost or trash once it’s used. Tattersall was an early trialist of upcycling technology in partnership with NETZRO — one of a growing number of companies that repurpose spent grain for human consumption. Before that, the distillery was sending used grain as feed for livestock (a common practice due to its nutritional value); but getting it to a human-consumable point was quite a feat. However, Kreidler acknowledged the ongoing ups and downs of the journey — noting that they ended the pilot (and continue supplying farms), as NETZRO’s technology needed quite a bit of labor and power to make it viable.

“Running it through new equipment and shipping it off to a farm to use as animal feed is a much more efficient and sustainable model for us,” Kreidler says, noting Tattersall goes through 10,000 lbs of grain weekly (and will likely double that soon). That feed goes to locally raised bison and cattle, which will eventually end up on the distillery’s menu.

Among other efforts, the distillery is drying used citrus peels for use as drink garnishes and using fruit “seconds” to make select spirits, such as its apple brandy. 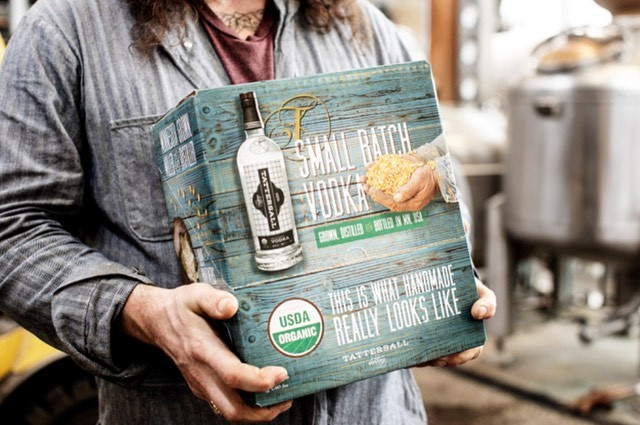 Kreidler described unique problems for a distillery with facilities operating only 45 minutes apart, but in very different municipal environments. Composting, in particular, is a big effort the distillery is still solving: The City of Minneapolis has been very supportive of businesses looking to convert and adopt composting programs; but in rural western Wisconsin, the infrastructure just isn’t there.

He explains that Minnesota has a higher tax on trash collection; so, it ends up being financially advantageous to compost when possible. Wisconsin doesn’t have that same tax; so, composting remains financially prohibitive.

“There aren’t enough people who want to compost (in western Wisconsin); so, we’ve been talking to a local university and high school — but there’s not enough interest to send trucks out there. It’s quite expensive,” he says. “It’s not a thing yet; but we’ll find a solution.”

On the flip side, liquor laws are more favorable in Wisconsin than Minnesota; and Kreidler says they can get quicker answers from municipal offices in rural Wisconsin than in a big city like Minneapolis.

Dealing with the industry’s biggest emitter

Kreidler agrees with other distillers that have noted that for producers at their size, certain regulations and guidelines pertaining to sustainability remain largely under their own guidance. One of the most glaring issues is how to deal with the sourcing and production of glass.

“It’s next to impossible to figure out and the supply chain is a mess,” he says.

Most glass suppliers in the US can’t support small-run quantities in the amounts that distilleries such as Tattersall can use; so, they’re forced to look to Asia and Europe to fulfill that need. The transportation and processing output is a big contributor to Scope 3 emissions.

“We just can’t get the US manufacturers to do small-enough runs,” Kreidler says. “If you’re doing anything less than a million or half a million bottles, they don’t have time for you. Trying to buy smarter as a smaller producer is just tough.”

All the while, Tattersall is doing what it can to help mitigate impact and promote better practices while navigating the challenges and opportunities that come with a growing business.

“We try to be transparent in just about everything we do,” Kreidler says, “to find things that make sense and build a more sustainable business.”