Waste Not
The Ocean Cleanup:
Into the Twilight Zone

Boyan Slat
Published 3 years ago. About a 7 minute read.
Image: The Ocean Cleanup

As the Great Pacific Garbage Patch continues to fragment into microplastics, it is key that we reach proven technology status as soon as possible; we are closer than ever to having a tool capable of cleaning up the oceans for good.

The Ocean Cleanup’s mission is to rid the world’s oceans of plastic. Our starting point for this is the Great Pacific Garbage Patch — the largest accumulation zone of plastic in the world. Doing so is tricky because:

The solution, therefore, requires us to 1) concentrate the plastic before harvesting, and 2) limit vessel use by designing the cleanup systems to operate autonomously for long stretches of time.

A Guide to Plastic Action for CPGs

Join us as representatives from rePurpose Global, Grove Collaborative and The Clorox Company share everything from new methodologies for comprehensive plastic footprint measurement to robust strategies for reduction to transparent and traceable plastic credits for immediate impact — at SB'22 San Diego.

Compare the function of the cleanup system to a rake in a large lawn full of leaves — to clear the lawn, one could pick up the leaves one by one, which would take forever; or use a rake to concentrate the leaves into one big pile, to then pick up the pile in one go. This is the main principle behind our cleanup concept; yet, our “rakes” need to be able to survive for years in one of the harshest environments on this planet, while being able to hold on to the concentrated plastic without human aid. 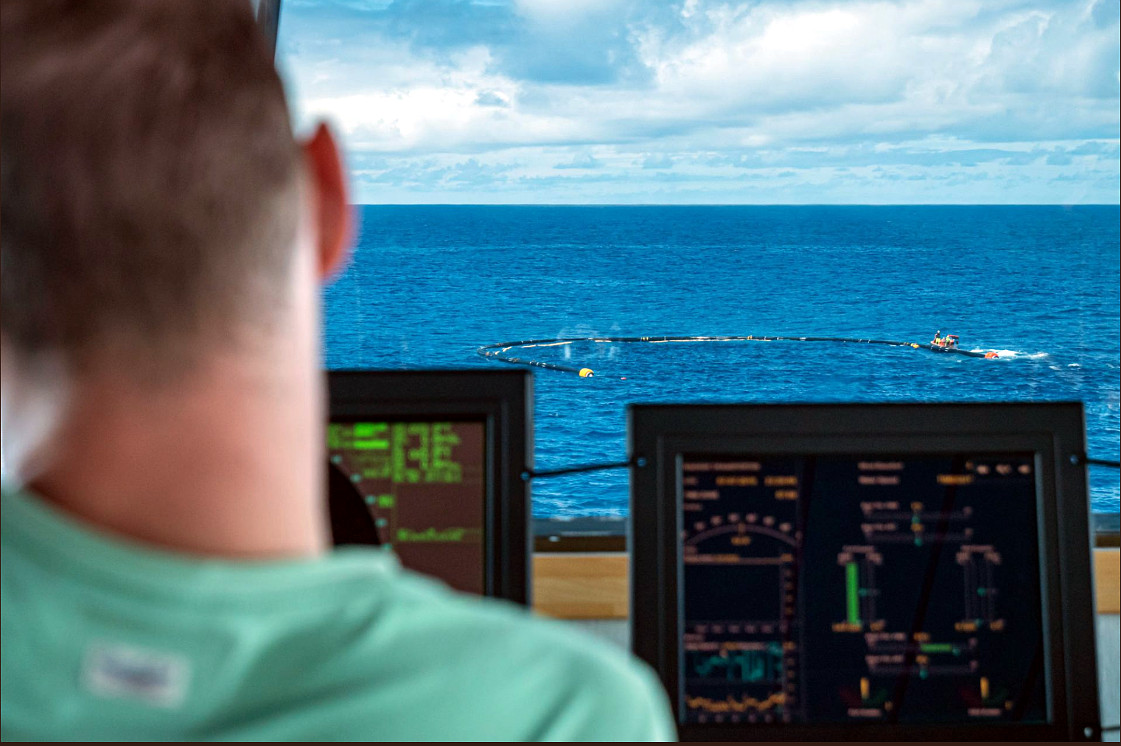 The importance of testing

The journey to clean oceans can be roughly divided into three big steps:

As the problem is getting worse by the day, and as the plastic in the patch continues to fragment into toxic microplastics, it is therefore key that we reach proven technology status as soon as possible.

Our first attempt at doing so was deployed last year: System 001 (aka Wilson). After months of testing, we took Wilson back to port in the first days of this year, after it suffered a fatigue fracture. This was not ideal, but both the diagnosis and solution came quite easily. The more complicated challenge was the system’s inability to retain plastic; instead of consistently going faster than the plastic, it alternated between going faster and going slower than the plastic. This meant plastic would float into the system, as planned, but then float out again.

As there wasn’t a single obvious fix to this, we decided to set up the upgraded design — System 001/B — in a more modular fashion. This allowed us to trial configurations that both sped up the system and slowed it down, in an attempt to find one that would result in a consistent speed difference between the system and the plastic. We launched System 001/B in late June, which was followed by a six-week testing campaign to test slowing down the system using a parachute anchor, and test speeding it up using large, inflatable buoys. 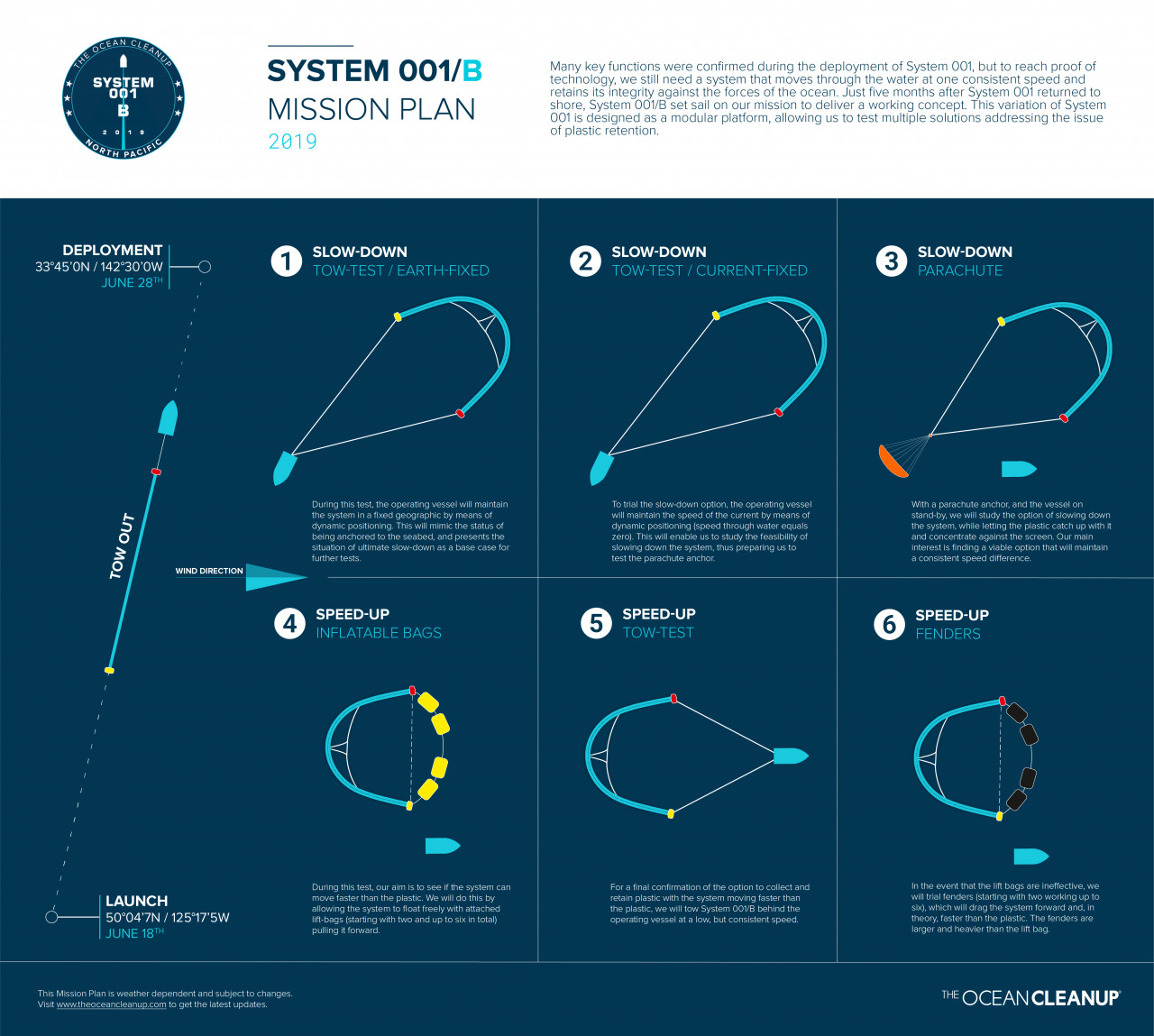 Overall, all configurations performed better than Wilson; in all tests, the system generally experienced a positive speed differential, meaning that the plastic entered the system from the correct side. But the winning concept is the slow-down approach, in which we use a parachute anchor to slow down the system as much as possible, allowing the natural winds and waves to push the plastic into the system. 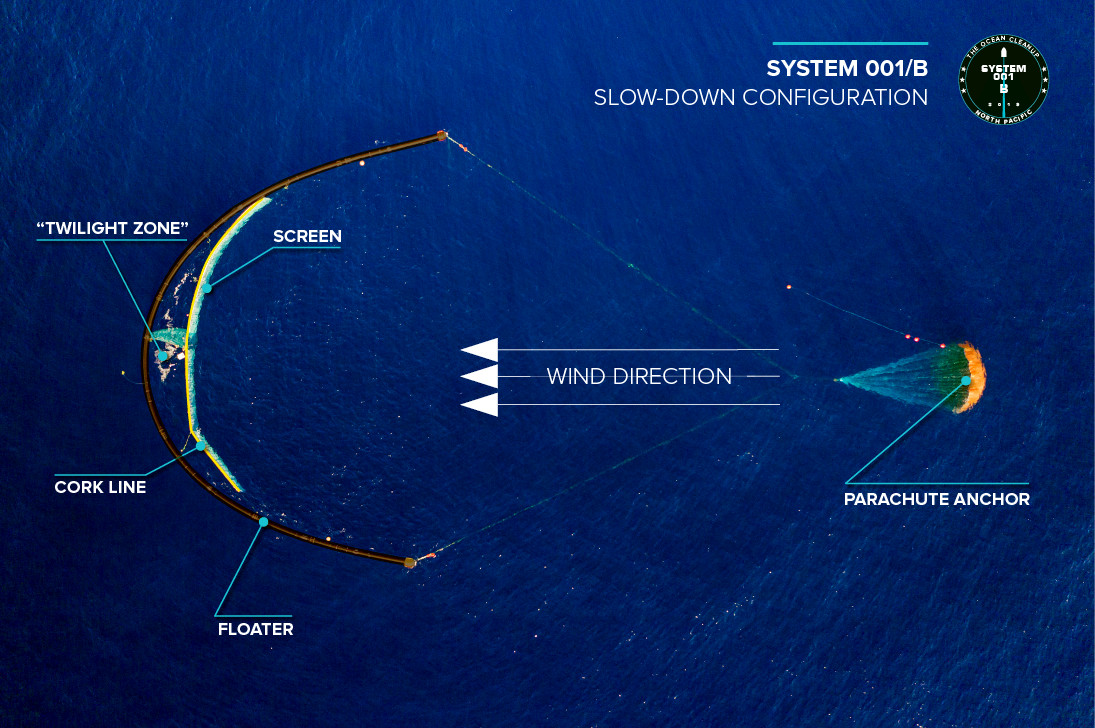 In the slow-down configuration, we haven’t witnessed a negative speed differential at all; plastic always arrives through the front, but never drifts out again. Hence, this is the concept we’ll be moving forward with.

During the tests, the plastic was concentrated by System 001/B by a factor of approximately up to 10.000. If we did this to the whole patch, we’d take the plastic distribution down from twice the size of the state of Texas to 1/35th the size of the city of Houston; thus, proving the concentration effect.

Into the 'Twilight Zone'

This is all good news and a key step in the right direction; however, we are not at proven technology status just yet. When we modified the design from System 001, we moved the screen forward slightly, away from the floater pipe, to eliminate the rail connection (the cause of the fracture) and simplify the design. A cork line, like you would see to section off a swimming pool, is used to hold the screen in place and prevent it from going slack and sinking. This modification has proven mostly effective, but it creates a space between the screen and the floater, which we have dubbed “The Twilight Zone.”

If you’re familiar with the popular TV series, you’ll know — there’s a twist in each episode; well, here’s ours: The plastic is currently able to cross over the cork line into The Twilight Zone. While it is technically still within the boundaries of the system, there is no screen underneath the floater pipe — so we cannot consider this plastic caught, because it is not securely retained in front of the screen.

Getting out of the twilight

While this issue seems to be much easier to solve than the speed inconsistency issue, it is still a problem that must be solved. We will attempt to do so by massively increasing the buoyancy and height of the cork line of the screen. The floats of the current cork line measure 15 cm in diameter. In comparison, we will now be using three rows of 32 cm floats stacked on top of each other, creating a total height of about half a meter.

Production has now been completed on this modification; it is currently on its way to the patch and we expect it to arrive soon.

This is promising news for us, but we move forward cautiously, knowing we may be presented with more unscheduled learning opportunities; overtopping might not be our only issue between now and proven technology. Yet, it is safe to say that we are closer than ever to having a tool capable of cleaning up these garbage patches for good.

As always, we will keep you updated with the results, so keep an eye out on social media.

This post first appeared on the Ocean Cleanup blog on August 16, 2019.

1. On top of visual observations of the plastic, we monitored the speed differential using GPS drifters which were deployed up to several times per day ↩

2. So far, conditions between 3 and 17 knots of wind have been encountered by the system in slow-down configuration. Note that loss risk is deemed higher in low wind speeds. ↩

3. An increased risk of overtopping is one of the few conceptual downsides of the slow down concept versus the speed up concept. In the case of the speed up concept, as it is driven by the wind, the wind waves are coming from the convex side of the system, creating a calmer area inside the system. The slow down concept is oriented 180 degrees relative to the wind direction, and therefore this calm area now does not exist in the system anymore. There are plenty of conceptual advantages to the slow down concept as well, however. It is much less sensitive to the wind, causing it to have a much lower probability of drifting out of the garbage patch (saving on a lot of herding work) and underwater drag elements will be easier to scale for future systems than above-water sails, to name a few. 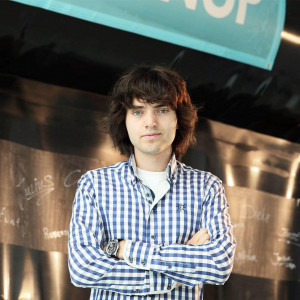 CEO and founder
The Ocean Cleanup

Boyan Slat is a Dutch inventor and entrepreneur who creates technologies to solve societal problems. He is the founder and CEO of The Ocean Cleanup, the foundation that develops advanced systems to rid the world’s oceans of plastic.