Waste Not
Trending:
Circular In, Single-Use Out for Food and Beverage Containers


Published 2 years ago. About a 4 minute read.
Image: Hubbub/Starbucks

12 UK projects have earned grants for creating a circular economy for coffee cups; and a Toronto restaurant is trialing reusable to-go containers, and asking others to follow suit.

Hubbub’s Cup Fund — launched in April and financed through a partnership with Starbucks (which introduced a 5p charge on paper cups in 2018 in the UK, to encourage customers to increase their use of reusable cups), to kickstart paper cup recycling across the UK — has now supported 12 recycling projects around the country with grants of between £50,000 to £100,000.

The Cup Fund is one of several of Starbucks’ efforts to curb coffee cup waste — earlier this year, the coffee giant chose 12 winners of the first Next Gen Cup Challenge, seeking solutions that redesign the fiber to-go cup and create a widely recyclable and/or compostable cup. In a post, Hubbub co-founder Trewin Restorick said the investment in coffee cup recycling facilities will enable the recycling of an extra 35 million cups per year.

The winning projects cover the London city center, along with other major cities, shopping centres, universities and motorway service stations.

Among the winning projects:

In this post, Restorick says the Cup Fund was developed in close collaboration with the recycling industry, to ensure that all collected cups will be recycled within the UK, into a variety of new products — including high-quality stationery and cardboard boxes. The winners of the Cup Fund funding were announced in the same week that Hubbub launched #InTheLoop – a program aimed at boosting recycling infrastructure in cities, and changing consumer behaviors with regard to to-go food and beverage containers. 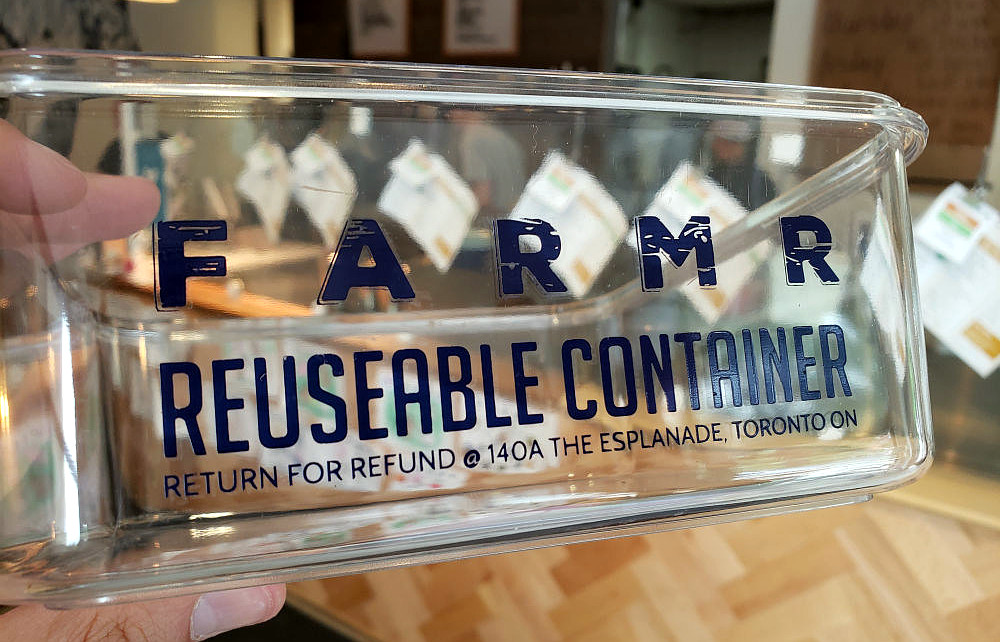 Meanwhile, over in Canada, Farm'r Eatery & Catering — a popular farm-to table, dine-in and take-out restaurant in downtown Toronto — is trialing a reusable take-out container, an answer to the restaurant's frustration with all the waste that’s created with every new take-out order.

"For dine-in, we use real plates and cutlery, then wash them for the next customer; the waste is minimal,” said Executive Chef Kyle Webster. “Unfortunately, with take-out, there is the container, plus there can be a bag and one-use cutlery, which really adds up. We are going through a ton of disposable products."

As the cost and the garbage started to add up, the team at Farm'r began to explore alternatives to disposable containers.

"Biodegradable containers rarely end up in the proper composting facility, while recyclable containers are often contaminated and end up in landfill," says Greg Martin, one of the founders of Farm'r.

For a $4 deposit, customers can opt for the reusable container, then bring it back next time (dirty or clean) for a full refund. Farm'r also offers a $0.50 discount on every plate for bringing your own container. The new, reusable container itself is better to eat out of than one made of paper or biodegradable material; it's also dishwasher- and microwave-safe.

Farm'r is currently testing the new container, and also experimenting with a reusable glass container; the restaurant hopes to inspire more restaurants to adopt similar systems.

"Yes, it's more work to offer a reusable container and to wash them; but if we can start the habit now, maybe one day it can catch on and we can make a real impact," Webster said.

WASTE NOT
Circularity Is ‘Izzy’: Meet the Clean Beauty Startup Creating a Blueprint for a Waste-Free Industry