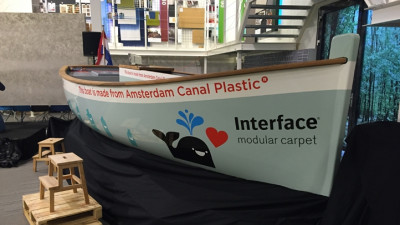 Press Release / The world's largest carpet tile manufacturer has joined forces with a plastic fishing company to design and create a unique boat made from more than 7,000 plastic bottles fished from the canals of Amsterdam. The innovative collaboration between Interface and Plastic Whale seeks to raise awareness of the dangers of river and ocean pollution and drive plastic waste elimination from global waters. Coincidentally, details of the new boat were unveiled in the same week that Sir David Attenborough gave his backing for a plan to fly across America in a plane powered by recyclable waste in a similar awareness-raising effort. - 6 years ago

Press Release / Global outdoor lifestyle brand Timberland, Impact Farming and Haiti-based Smallholder Farmers Alliance (SFA) today announced the launch of a new feasibility study exploring the possibility of reintroducing cotton as an export crop for Haitian smallholder farmers. If the study proves successful, the opportunities for organic cotton farming in Haiti are extensive, and companies like Timberland can one day transition from being early supporters of the SFA agroforestry enterprise to being its customers. - 6 years ago

On World Water Day, Nestlé Waters Expands its TOGETHER 4 WATER Events with Project WET and Reaffirms its Commitment to Water Stewardship

Press Release / Nestlé Waters celebrates World Water Day every year by uniting its employees and local communities at TOGETHER 4 WATER events. These events educate children from communities near Nestlé Waters' bottling sites about the water cycle, water challenges facing the world and water preservation through fun, hands-on pedagogical activities developed by its NGO partner, Project WET. These activities are run by Nestlé Waters employee volunteers. In 2015, over 1,000 employees and close to 25 000 children from 30 countries participated in these events. - 6 years ago

Press Release / Today, General Mills announced its commitment to champion development of water stewardship plans by 2025 for the company’s most material and at-risk watersheds in its global value chain. The commitment is in recognition of World Water Day and in conjunction with the White House Water Summit. As part of this commitment, the company will lead corporate collaboration efforts, foster development of foundational tools, and advocate science-based policy in these watersheds, commensurate with the gap in stewardship in each individual watershed. - 6 years ago

Press Release / Solazyme, Inc., now known as TerraVia™, a pioneer in algae innovation and a food, nutrition and specialty ingredients company, has signed a definitive multi-year global supply agreement with Unilever. The five-year agreement provides for Unilever to purchase renewable algae oils for use in personal care products and reflects the culmination of more than seven years of collaboration between Solazyme and Unilever. - 6 years ago

Press Release / Leading green hotel chain The Rezidor Hotel Group publishes its Responsible Business Report. Included since 2010 in Ethisphere’s World’s Most Ethical Companies List, Rezidor is committed to being the most innovative and responsible hotel company with leading sustainable hotel brands such as Radisson Blu and Park Inn by Radisson. 2015 marked another impressive year for Responsible Business at Rezidor with successes in all three core areas of the company’s Responsible Business programme. Highlights include: Think Planet – Minimising our Environmental Footprint Energy savings reach 22% Water consumption reduced by 29% 272 eco-labelled hotels Meetings Minus Carbon offsets 32,000 tonnes of carbon - 6 years ago

Press Release / Limburgerhof, Germany – March 3, 2016 – Today, BASF has launched MaglisTM, an online agricultural platform set to become a key partner in helping farmers manage their crops. With the platform, farmers will be able to gather, interpret, and monitor a range of crop-related data that will support them in making better decisions on how to grow and market their crops. The launch took place at the Commodity Classic agricultural convention and trade show, in New Orleans, Louisiana, USA. - 6 years ago

Press Release / Iron Mountain Incorporated (NYSE: IRM), the storage and information management company, began to power a segment of its New Jersey and Pennsylvania operations with local wind energy in March under a new supply agreement arranged by Renewable Power Direct (RPD), the national green power marketer. Under the agreement, Leeward Renewable Energy, through its Jersey-Atlantic Wind (JAW) generating facility, will be the source of physical power to cover a portion of Iron Mountain’s electric load and advance corporate sustainability goals. - 6 years ago

Press Release / Hanoi, Vietnam, March 15, 2016—IFC, a member of the World Bank Group, is partnering with global leading apparel and footwear company VF Corporation and consumer products retailer Target Corporation to improve resource efficiency at their supplier factories in Vietnam. Under the first phase of this program, energy and water efficiency assessments will be conducted at about 30 factories over the next 12 months to help them reduce operating costs and improve productivity while contributing to the country’s green growth and climate change targets. - 6 years ago

Press Release / Iron Mountain Incorporated® (NYSE:IRM), the storage and information management company, today announced the signing of a 15-year wind power purchase agreement that will exchange 30 percent of its North American electricity footprint with renewable energy. Additionally, the purchase of two-thirds of the power produced by a new wind turbine farm – currently under construction in Ringer Hill, Penn. – will provide Iron Mountain with long-term rate stability and expected annual savings of up to $500,000 in utility costs. - 6 years ago

Press Release / A successful seven-year collaboration between EarthCheck, the world’s leading scientific benchmarking, certification, and advisory group, and properties in the Carlson Rezidor Asia Pacific portfolio has achieved US$6.9 million in savings and an overall environmental footprint reduction of 23 percent. Today, eight of the group’s properties including its Singapore-based Asia Pacific headquarters have been awarded EarthCheck Gold Certification, and a further eighteen properties have been awarded Silver Certification. - 6 years ago

Press Release / Each year, the Oracle Sustainability Innovation Award is presented to companies that use Oracle software or other Oracle products to save energy, waste or emissions, design more eco-friendly products or otherwise reduce their environmental impacts while reducing costs at the same time. Cisco was nominated by Pincvision, its partner for over ten years. Cisco is known for its routers, servers, networks and matching software. The company has operations in 165 countries and recorded 47.1 billion US Dollar in sales in 2014. - 6 years ago 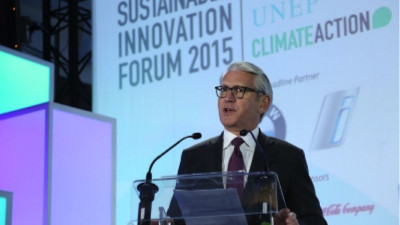 Press Release / Climate Action spoke to Dean Scarborough, Chairman and CEO at Avery Dennison, about the company's approach to sustainability and the low-carbon solutions the company will be offering at COP21 in Paris in December. - 7 years ago