Maxine Perella
Published 2 years ago. About a 5 minute read.
Image: The Absolut Company

While still in the testing phase, The Absolut Company hopes that its new paper bottle will be the first of many in a wider range of sustainable packaging solutions for consumers.

The pursuit of the perfect paper bottle has been gaining momentum within the drinks industry, particularly among alcoholic beverage brands, as they seek to strengthen sustainability commitments on carbon and plastics reduction.

The Absolut Company has become the latest multinational to signal its intention in this area with the launch of 2,000 prototype paper bottles for its ABSOLUT vodka and ABSOLUT MIXT products. The bottles, which will be subject to controlled consumer testing in November, mark what ABSOLUT’s innovation director of future packaging Niclas Appelquist, calls a “milestone” for the company. 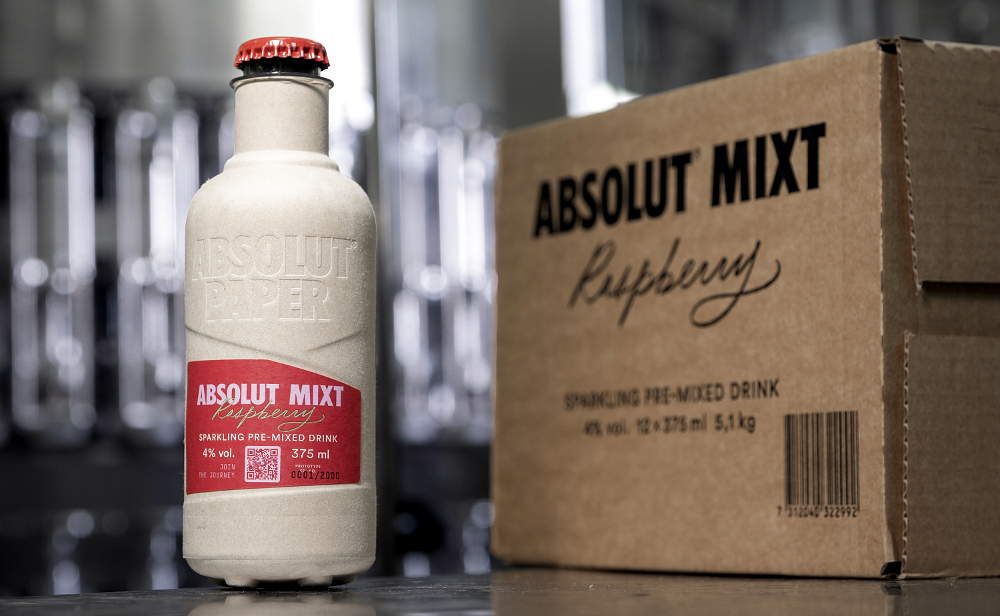 “We are super proud of it,” he tells Sustainable Brands™ in a recent interview. “It’s a great step towards getting to that vision of a fully circular model for this packaging.”

ABSOLUT has been collaborating with Paboco, the paper bottle company, for over a year on the design of the prototype bottle — which consists of 57 percent paper and 43 percent recycled plastic (PET) barrier. Using a pulp formula with a strong fiber network, the bottle has been designed to withstand the pressure from CO2, while the thin PET barrier layer prevents water vapour and oxygen transmission. The pulp is sustainably sourced and will carry the FSC 100 percent label.

Appelquist says the level of innovation being undertaken is being driven by what consumers are expecting from ABSOLUT as a brand: “One of the things that lies in those expectations is to be at the forefront, and to be pushing and leading for more sustainable solutions and circular models.”

An important aspect of the paper bottle will be its nudge factor, when it comes to encouraging people to do the right thing.

“What it does — being made out of paper — is remind consumers about recyclability, about waste management, and of being conscious about sustainability. Paper is a well-known material that already has an established recycling stream,” Appelquist says.

He adds that ABSOLUT’s intention is not to fully replace glass as a packaging material for its brands; but rather complement it with other easily recyclable materials such as paper and aluminium, and develop a wider range of sustainable packaging solutions for consumers.

The bottles will shortly be tested among a panel of consumers that will be representative of ABSOLUT’s customer base. Appelquist says the touch and feel of the bottle is very different compared to glass, and so understanding how people relate to the new packaging will be paramount to its future success.

“We will talk to them about whether this is something that feels right for a brand like ABSOLUT; so — how is the touch of the bottle, how does it look, does it feel good in your hand? The whole consumer experience and the handling of the bottle is what we are looking to understand.”

The controlled consumer testing environment will also allow ABSOLUT to take care of the packaging once it has served its purpose, so that the different materials — including the PET barrier — can be separated during the recycling process and recovered. Appelquist says the prototype represents the first phase of the project and that there are bigger plans going forward.

“What we are striving towards with this prototype is to have a fully bio-based and fully recyclable paper bottle — that is where we want to end up. We realised we can’t do everything in one go, so we needed to break it down into various steps.”

ABSOLUT is now exploring the feasibility of using a fully bio-based plastic film coating (PEF), which could eventually replace the PET barrier, as it looks to make a more scalable solution. As part of its work, the company has been collaborating with brands including Carlsberg, Coca-Cola and L’Oréal through the Paboco paper bottle community to share learnings and build on combined capabilities and expertise.

Carlsberg kicked off its own project to develop a bottle made from sustainably sourced wood fibers in 2015, alongside innovation experts ecoXpac and packaging company Billerudkorsnäs. These combined efforts have resulted in the emergence of Paboco and the corresponding paper bottle community that unites the participating global companies and experts with the vision of advancing high-quality sustainable packaging. Last year, Carlsberg announced it already has two fully recyclable, paper beer bottle prototypes in place.

“It’s a great collaboration in that sense, and quite unique,” Appelquist says. “We all have different areas and products that we are developing and will likely have different solutions, but there are enough similarities to learn from each other.”

He adds that for ABSOLUT, the project has already proved invaluable in contributing towards the company’s wider sustainable packaging strategy and goals:

“We have said by 2025, we want all our packaging to be recyclable, compostable, reusable or bio-based. The paper bottle project is already driving both the recyclability and the bio-based aspect of that ambition.”

In July, fellow spirits giant Diageo announced that its foray into developing paper bottles — what it's calling the world’s first, 100 percent plastic-free, paper-based spirits bottle; made entirely from sustainably sourced wood — will debut with its Johnnie Walker brand in early 2021. When asked when we might expect to see an ABSOLUT paper bottle on grocery shelves, Appelquist cautions that there is still a long journey ahead.

“This next phase will be about getting feedback from consumers. We will learn from that, optimise our processes and do a second round of testing. It’s a bit early to give a date for volume production, but we will know within months how this first prototype is performing.

“Based on the consumer feedback we have so far, just talking about the concept itself has been very positive and we are really happy about that,” he reflects. “These are exciting times.”