Sustainable Brands
Published 2 years ago. About a 7 minute read.

Beverage giants Coca-Cola and Evian and global packaging company Amcor have announced new efforts that will fundamentally reshape their approaches to packaging. By 2030, Coca-Cola says it will collect and recycle 100 percent of its packaging; Evian has pledged to produce all of its plastic bottles from 100 percent rPET by 2025; and all of Amcor’s packaging will be recyclable or reusable by 2025.

The world has a packaging problem and The Coca-Cola Company is gearing up to help fix it. The company has announced a new global packaging vision for a World Without Waste, which it intends to back with a multi-year investment that includes ongoing work to make its packaging 100 percent recyclable.

World Without Waste is the next step in the company’s ongoing sustainability efforts, building off success in replenishing nearly 100 percent of the water it uses in its final beverages. Coca-Cola achieved and exceeded its water-replenishment goal in 2015, five years ahead of expectations.

Together with its bottling partners, Coca-Cola will work to deliver on this goal through a renewed focus on the entire packaging lifecycle — from the design and production phase, to recycling and repurposing after use. The company will consult with the Ellen MacArthur Foundation’s (EMF) New Plastics Economy initiative, The Ocean Conservancy’s Trash Free Seas Alliance and the World Wildlife Fund throughout the transition.

The company has set a 100 percent collection goal for 2030, an initiative which aims to recycle a bottle for every new bottle sold. Coca-Cola will also invest in boosting recycling awareness and work with local communities, industry partners, customers and consumers to address issues such as packaging litter and marine debris.

To achieve its collection goal, the company will continue to work on enhancing the recyclability of its packaging by incorporating more recycled content, developing plant-based resins and reducing the amount of plastic in each container. By 2030, the Coca-Cola system also aims to make bottles with an average of 50 percent recycled content.

“Bottles and cans shouldn’t harm our planet, and a litter-free world is possible,” said James Quincey, President and CEO of The Coca-Cola Company. "Companies like ours must be leaders. Consumers around the world care about our planet, and they want and expect companies to take action. That’s exactly what we’re going to do, and we invite others to join us on this critical journey.”

“Instead of focusing on reducing the amount of plastic it produces, the sure-fire way to reduce ocean plastic pollution, Coca-Cola is trying to offset its huge plastic footprint by investing in a bit more recycling,” said Louise Edge, Senior Oceans Campaigner for Greenpeace. “As the most recognizable brand in the world and the biggest plastic bottle producer, Coca-Cola has a special responsibility to lead the way in reduction of single-use plastic. Its plan is full of band-aids and will do very little in the way of making a meaningful impact on the amount of plastic entering our waterways and food chain. Coke has a long way to go to show it is taking the plastics epidemic seriously.”

Quincey views the situation differently, saying that the company’s plan creates the foundation for a closed-loop system: “If we can drive up collection, then we can reuse that and create a circular economy,” he said. “I think that’s what it’s all about — creating this circular economy, and then there’s no such thing as a single-use bottle.”

Meanwhile, in a bid to push the needle forward on its journey to carbon neutrality by 2020, Evian is championing packaging sustainability by committing to make all of its plastic bottles from 100 percent recycled plastic by 2025.

“We want to adopt a circular model where 100 percent of our plastic bottles will become plastic bottles again. This will enable plastic to evolve from potential waste to become a valuable resource,” said Patricia Oliva, Global Brand Director for Evian.

Currently, Evian’s bottles contain 25 percent recycled plastics. In order to deliver its 2025 ambition, the company has partnered with Quebec-based Loop Industries, which has developed a technology that enables plastic materials to be recycled indefinitely. Evian has also been consulting with the Ellen MacArthur Foundation to move from a linear production model to a circular one, in which waste is valued as an important resource.

“The recent announcement of our partnership with Evian is a clear endorsement that Loop™-branded resin is poised to become the gold standard for sustainably produced polyester,” Daniel Solomita, founder and CEO of Loop Industries, told Sustainable Brands. “Our revolutionary technology allows all forms of waste polyester, such as carpets and clothing, to be upcycled into high-purity plastic that meets FDA requirements for food contact. The true importance of Loop Industries’ technology is to accelerate the world’s shift toward a circular economy and away from the traditional take, make and dispose economy.”

Recognizing the important role consumers have to play in boosting recycling rates, Evian will roll out the #herothezero initiative in early 2018 to raise consumer knowledge about circularity as a way to change how we think about plastic usage and waste. The company will also work with VICE Impact to create a number of educational documentaries.

“Rooted in its pioneering spirit and long-lasting commitment towards sustainability, Evian will drive a step change to address the critical issue of plastic. We want to use the power of our global brand to take a leadership position, drive collaboration across the industry and, together with partners, transform our approach to plastic,” Oliva added.

Finally, Amcor has become the first global packaging company to commit to making all of its packaging recyclable or reusable by 2025. The company also pledged to increase its usage of recycled materials.

The action joins Amcor with 10 brands and retail companies making the same 2025 commitment in collaboration with the Ellen MacArthur Foundation, the majority of which are Amcor customers. EMF estimates that the companies together influence more than six million metric tons of plastic packaging each year. Amcor is currently the only packaging company among core partners to EMF and the foundation’s New Plastics Economy initiative.

While most of Amcor’s packaging is currently developed to be recyclable and reusable, as well as designed to use less material, there is still more to be done.

“Amcor being the first global packaging company to commit to working toward 100 percent recyclable or reusable packaging by 2025 is an important milestone towards creating a circular economy for plastics,” said Rob Opsomer, EMF’s Systemic Initiatives Lead, at the World Economic Forum in Davos this week. “The company’s commitment and expertise will be instrumental in supporting the growing group of brands and retailers that have set similar targets for themselves.”

Some of the biggest challenges to recyclable and reusable packaging remain, Opsomer said, and will be overcome through leadership and innovation, in partnership with customers, suppliers, government agencies, NGOs and others.

“The people who make up our global team are inspired by ambitious goals,” said Ron Delia, CEO of Amcor. “They are capable, creative and committed to building a great business and making a difference.” 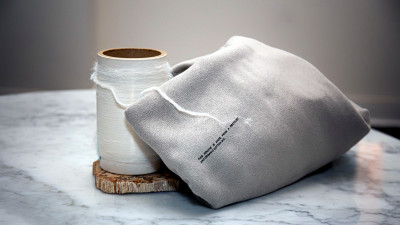