As Congress signs off for Thanksgiving, roughly 12 million Americans could soon lose jobless benefits. The hope is that people and companies continue to step up; government programs continue, and the flexibility the food supply chain has gained during COVID will enable a nimbler switch to accommodate future need.

It’s hard to believe that in a country that has so much, so many don’t even have one nutritious meal each day. In 2019, 10.5 percent or 13.7 million US households — more than one in ten — had low or very low food security. Even more disturbing, households with children are more likely to experience food insecurity and may not qualify for federal nutrition programs. Feeding America estimates that 17 million children are among the more than 50 million people who may face hunger due to COVID-19.

“We are in a 100-year flood of hunger,” said Susannah Morgan, CEO of Oregon Food Bank. “Before COVID, we were already on a trajectory buildup of escalating need in migrant and immigrant groups who don't qualify for federal benefits.”

With the pandemic shutdown, families and communities were hit by a perfect storm: overnight unemployment coupled with the dramatic reduction in supermarket donations to food banks due to food hoarding and supply chain issues.

In April, the United Nations estimated that 265 million people worldwide could face severe food insecurity. At the same time, the five-week US job loss number rose to 26 million, and closures of churches, schools and daycares eliminated other daily food sources for families and children.

Building a movement around regeneration

Join us as Nestlé CMO Aude Gandon shares more about the Beneath the Surface platform and how the world’s largest food and beverage company is working to advance regenerative food systems at scale — October 18 at SB'21 San Diego.

In the spring, farms were overcome with food and dairy products earmarked for commercial-scale processing and markets. The pandemic closed processing facilities and distribution systems set up for large-scale commercial packaging that couldn’t retool fast enough to handle consumer packaging specifications.

Much of that surplus was dumped or buried — at a huge loss to the farmers and the agriculture sector and to the horror of hungry US families and those trying to help. On the bright side, donations, direct sales from farms to consumers of non-USDA-regulated food; and milk-donation events sponsored by companies, farmers, and associations such as Dairy Farmers of America across the country got food into the hands of the hungry, but it was only a fraction of what was needed.

Faced with almost insurmountable demand, food banks and relief organizations retooled their food acquisition and distribution approaches. Massachusetts-based Food Link — an organization that rescues and redistributes food through partnerships, including the Greater Boston Food Bank — collaborated with Boston College at the height of the pandemic. They used the college’s idle commercial kitchen and staff to repackage large milk, yogurt and egg donations, originally destined for food-service channels, into consumer portions. While this innovative partnership ended with the return of college students to campus, new partnerships are being formed — including one with a local vocational high school to have students process the food donations. 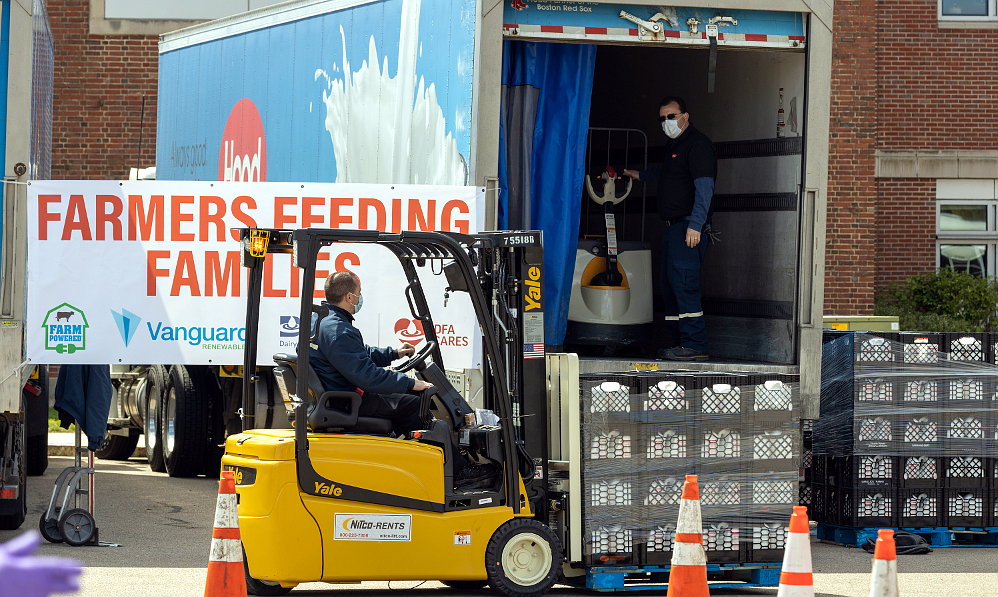 Private corporations contributed some relief in the food access battle by collaborating with associations, food banks, government and elected officials to get food and milk into the hands of those who needed it most.

Vanguard Renewables’ collaboration with Dairy Farmers of America’s Farmers Feeding Families got more than 17,000 gallons of whole milk to families in Massachusetts and Rhode Island over a four-week period via drive-up events and collaboration with regional food pantries.

For our team, pulling together the milk donation events was a hell of an effort, but it really felt good as people were pulling up in cars and we were putting gallons of milk in their trunks. So many families are just a few paychecks away from not having their nutritional needs met, and that’s devastating in a country with such abundance.

Although the latest unemployment rate is now down to 6.9 percent, it is still well above the 3.5 percent rate of February; and an additional 2.4 million jobs have been permanently lost since then. Elise Springuel, Operations Manager of Food Link, points out that “unemployment recovery can be misleading; some Americans may be back working, but at a lower pay rate.”

Per RIFB’s Schiff, temporary government programs such as FEMA meal kits and increased benefits under the SNAP program are going to end soon. So, despite all that has been done, the crisis of food insecurity in the US continues. In July, Feeding America estimated a charitable food need of 17 billion pounds through June 2021, over three times the last annual food distribution of 5 billion pounds; it is projecting an unprecedented potential 10-billion-pound food shortfall.

As I write this, Congress is going on vacation for Thanksgiving week; yet roughly 12 million Americans could lose jobless benefits the day after Christmas, per a Century Foundation study. First time unemployment claims last week totaled 742,000. Two government relief programs under the CARES Act are set to expire December 26, which could push those Americans into poverty and hurt the country’s long-term economic recovery. The hope is that more people, companies and politicians will continue to step up; government programs will continue, and the flexibility the supply chain gained during the pandemic will enable a nimbler switch between food channels to accommodate future need.

“With other disasters, there is an initial emergency mode; and although recovery can take a long time, at least it’s a straight line. With COVID, there is so much uncertainty,” Schiff says. “You find out in an emergency about leadership. People I wouldn’t have expected, or I didn’t even know, have asked how they can help.”

John Hanselman is the Founder and Chief Corporate Development Officer of Vanguard Renewables — the U.S. leader in farm-based organics to renewable energy. John has more than 30 years of experience leading mission-driven companies focused on disruptive, emerging technology and processes. He launched Vanguard Renewables in 2014 and has focused his work on developing a decarbonization pathway for the food and beverage industry by enabling the repurposing of unavoidable manufacturing and supply chain waste into renewable natural gas. (Read more ...)

THE NEXT ECONOMY
Can We Evolve from the Chip Shortage to Better Supply Chains and Consumption Habits?