Bill Baue
Published 5 years ago. About a 7 minute read.

Part Nine in a 10-Part Series by Reporting 3.0. See previous parts below.

New terms emerge when new realities outstep our inherited lexicon. For example, a recent Discussion Paper by a group of prominent NGOs coined the term “context-driven stakeholders,” giving name to the increasing proliferation of advocates for the Sustainability Context Principle and Context-Based Sustainability (or CBS – a framework for implementing the Principle). While it’s surprising it took so long for this trend to gain steam – a decade-and-a-half since the Global Reporting Initiative introduced the Principle in 2002 – it isn’t surprising that this theory refuses to sit on a shelf, but is getting activated, instead.

Indeed, Context-Based Metrics distinguish themselves by literally embedding a gap analysis within them, comparing actual performance (in the numerator) to normative standards (in the denominator) to reveal when the former lags the latter. Limits to Growth co-author Dana Meadows deftly articulated the vital importance of such an approach in a 1998 report: 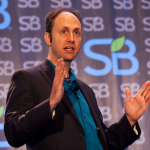 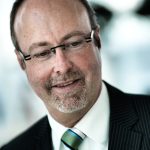 Bill Baue and Ralph Thurm
will discuss
Blueprinting the Future
of Reporting, Accounting
and Data Management
at New Metrics '17.> The central questions of sustainability are: How long can this activity last? How long do we have to respond before we run into trouble? Where are we with respect to our limits? … [S]ustainability indicators should be related to carrying capacity or to threshold of danger or to targets. Tons of nutrient per year released into waterways means nothing to people. Amount released relative to the amount the waterways can absorb without becoming toxic or clogged begins to carry a message (bold added).

And such “messaging” activates responses, when sustainability thresholds are transgressed – which is currently the case on a host of planetary boundaries (such as phosphorous and nitrogen load) and societal norms (such as modern slavery and livable wages). This is the core message of the sixth (and penultimate) chapter of the Reporting 3.0 (R3) Data Blueprint (which is the focus of this, the 9th article in the 10-Part series.)

R3 Steering Board Member Brendan LeBlanc of EY laments the relative dearth of context-driven stakeholders, and so sees activation as the key missing link for scalability of the transformations necessary to achieve sustainability:

My particular interest, since I first heard about the Reporting 3.0 Platform, has been in helping R3 activate evidence-based stakeholder advocacy that uses data from corporate reports to contextualize the sustainability of company performance.

Triggering this scalability depends on not only direct activation of context-driven stakeholders, but also more indirect means – such as what Daniel Aronson of Valutus calls catalytics. This mechanism applies particularly to value chains (or cycles), where companies’ own impacts can be relatively minor compared to the impacts of upstream suppliers or downstream customers/consumers. Spurring direct activation and indirect catalytics is key to accelerating transformation.

The Data Blueprint illustrates activation, catalytics and acceleration through a number of different constituencies, including governments, NGOs and investors, and with several instances, such as open data platforms and multiple blockchain implementations that we briefly profile below.

On the governments front, the Data Blueprint notes that both the Sustainable Development Goals (SDGs) and the Paris Agreement require the achievement of global targets, primarily coordinated by governments at the national level – via National Sustainable Development Strategies (NSDS) for the SDGs and Nationally Determined Contributions (NDCs) for COP21, which “create a constructive feedback loop between national and international decision-making on climate change.” This, in turn, requires corporate contributions that align with the level of ambition in various jurisdictions. Netherlands-based sustainability consultant Renilde Becque explains the problem thusly in the Data Blueprint:

The standard country and corporate methodologies for consumption-based emissions are very different, with countries calculating on the basis of Environmentally Extended Input-Output (EEIO) and companies on the basis of the GHG Protocol, for example. It wouldn’t be doable time/effort wise for a country to go down the GHG Protocol path, while for a company it wouldn’t make much sense to use EEIO due to its lack of granularity.

The Reporting 3.0 Beta Testing Program, which hosts projects that pilot Blueprint Recommendations, is one avenue for bridging this gap. For example, a R3 partner brought to our attention a Working Paper on Assigning firm-level GHGE reductions based on national goals, an approach that shows promise for resolving the problem of harmonizing global- and national-level goals with company-level action.

NGO Advocacy: From Evidence-Based to Context-Driven

Oxfam’s Behind the Brands campaign, which holds food companies accountable for their sustainability impacts through evidence-based advocacy, matured toward “context-driven” advocacy last year when it commissioned Andrew Winston and Jeff Gowdy to independently assess the Science-Based Targets of General Mills and Kellogg for GHG emissions (particularly Scope 3). In addition to giving the companies essentially “passing grades,” Winston & Gowdy:

… recommend that best practice would mean going even faster and leading value chains and sectors down the decarbonization path. The more aggressive approach would build a buffer zone for emissions-reduction performance and, on a value chain level, may actually be more economic.

This approach would map onto the R3 Strategy Continuum past the mid-line of context-based sustainability, edging toward the net positive zone (such as BT did last week in announcing a 1.5°C Science-Based Target that surpasses the standard 2°C target). However, scaling up such ambition to other companies will require “more direct stakeholder pressure,” to quote a 2013 empirical analysis of corporate disclosure of GHG emissions. Extending this to its logical conclusion, context-driven NGO advocacy is key.

Preventable Surprises (PS) exemplifies just such a context-driven NGO, focusing its advocacy on investors – arguably the most powerful voice for accelerating corporate progress, as owners.

For example, even before the June release of the Taskforce for Climate-Related Financial Disclosure (TCFD) Recommendations calling for companies to apply <2°C scenario analysis, investors were already filing shareholder resolutions asking for just such scenario analysis – resulting in majority votes this year at ExxonMobil (62.1 percent), Occidental (67.3 percent), and PPL (56.8 percent).

Earning its status as a Positive Maverick (the term coined by PS Founding Chair Raj Thamotheram), PS is pushing further, urging investors to file resolutions asking companies to publish transition plans to <2°C business models, such as the single such resolution filed this year at the utility Southern Company (45.7 percent). PS has published a guidance note for investors seeking transition plans from companies in the utility sector, given their intermediary role in emissions ascribable to power purchasing companies. PS notes that scenario analyses are readily game-able, and typically produced by technical experts, while transition plans require C-suite and board-level engagement and accountability, and thus are much more transformative.

Given the gap analysis embedded within context-based metrics, the resulting contextualized data has the potential to activate and accelerate the alignment of company performance (in the numerator) with sustainability norms (in the denominator) by displaying these results on open platforms. The Data Blueprint describes a sample pilot project that has spurred interest in collaboration, including with the World Benchmarking Alliance first proposed by Aviva at the UN last September – and launching last week during Climate Week. Aviva proposes free “Public League Tables”:

These league tables will compare companies on their performance across a range of indicators such as climate change, gender, labour standards, access to healthcare and other indicators aligned to the SDGs.

The rise of blockchain applications carries significant promise for smart and accountable tracking of transactions, with public ledgers enabling the integration of financial, social and ecological impacts along the chain. In particular, R3 recommends inserting contextual filters into blockchains, a concept pursued in two pilots profiled in the Data Blueprint:

Returning to where we began, Dana Meadows unflinchingly identifies the stakes of pursuing activation of context-driven stakeholders and acceleration of performance accounting tied (via contextualized data) to the ultimate ends of well-being:

We need to press courageously to discuss well-being and define indicators that reflect it, even if we suspect that this process will shake up our worldviews and challenge our power structures and our lives. If those power structures and lives are in fact creating well-being, then they won’t be challenged. If they are not, then they should be shaken.