By reviving traditional meadow orchards in its native Luxembourg, where much of the cider industry had died and fruit was going to waste, carbon-negative Ramborn Cider Co. has set about reversing the loss of biodiversity in the region.

Greta Thunberg is right. If governments, people and businesses put the same amount of energy and resources into saving our planet as they have into finding solutions to the COVID-19 crisis, our natural environment would not be in such a poor state.

To recap, the overwhelming evidence — as presented by the Intergovernmental Science-Policy Platform on Biodiversity and Ecosystem Services (IPBES) earlier this year — is that the health of the ecosystems on which we all depend is “deteriorating more rapidly than ever.” In fact, IPBES says we are “eroding the very foundations of our economies, livelihoods, food security, health and quality of life worldwide.”

According to the analysis, around one million animal and plant species are now threatened with extinction — many within decades — more than ever before in human history. The average abundance of native species in most major land-based habitats has fallen by around 20 percent since 1900. Meanwhile, more than 40 percent of amphibian species and 10 percent of insect species are under threat.

It is an issue — along with the interconnected climate crisis — that European cider maker Ramborn is on a mission to tackle head on. With the United Nations and World Health Organisation both identifying biodiversity as key to preventing and mitigating future pandemics, it’s a worthy endeavour.

“Some friends and I were on a trip to the UK, enjoying the local cider. We started sharing stories of cider and the role it used to play in our local community in the village of Born, Luxembourg,” says Carlo Hein, co-founder of Ramborn (a contraction of the Rambo apple breed and the city of Born where the cidery sits). The cider-making tradition had died out, and that meant the fruit was going to waste — and the trees were dying, too. “We knew that the fruit was perfect for cider-making; and out of curiosity, we just tried it.” 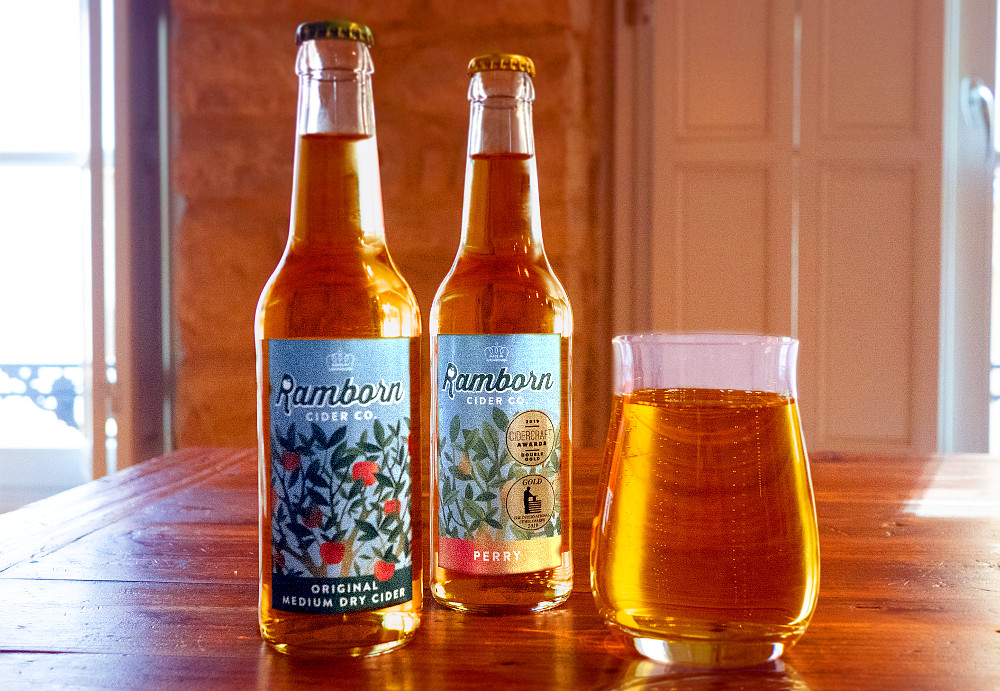 Since launching in 2006, Ramborn has grown into a successful brand — with its award-winning range of cider and perry found in stores across the US, the UK, Italy, Iceland, Finland, Switzerland and Germany.

But for Hein, it wasn’t ever just about launching a drinks brand.

By reviving traditional meadow orchards where much of the fruit was going to waste, the business has set out to reverse the loss of biodiversity in the region. There’s a serious absence of industrial plantations; and circular production methods are favoured, with zero irrigation and zero pesticides. And the business continually plants meadow orchards year in and year out.

In fact, orchard maintenance is at the heart of the company’s sustainability strategy — looking after trees that house up to 1,000 different species each, many of which are endangered, both in their own orchards and in the fields of more than 150 local supplier farmers.

“In the winter, you’ll find Chantal [Hellers-Bisenius], our head of orchards, in a harness — physically climbing trees to prune them and remove mistletoe, which can kill trees, to bring them back from the brink,” Hein adds.

Over the last 100 years, there has been a 90 percent decline in the number of trees in Luxembourg – from 1.2 million to around 120,000 today. Hein says this is “the catastrophic cost of business as usual in our industry.” But by continuously replanting orchards, the business says it has removed more than 31,000kg of CO2 from the atmosphere — making the business carbon negative.

Ramborn formalised its focus on environmental protection and impact reduction by achieving B Corp status earlier this year, making it the first cidery in Europe (and third cidery in the world) to do so.

“It allows us to fully evaluate the impact of our business; and give all of our stakeholders the confidence that we are accountable to the highest, most rigorous ethical business standards possible,” Hein says.

The company claims to have helped protect and revive nearly one million square metres of diverse habitat, saved 739,510kg of food waste, and reached a stage where 100 percent of its waste pomace is turned into biogas.

So, how important is its B Corp status and overall approach to sustainability to its success in what is becoming a crowded cider market?

“Personally, I’m convinced that long-term strategies always pay out more than chasing short-term goals,” says Hein, who is no newcomer to the world of sustainability — having set up Luxembourg’s first wind farm in 1996; and the first large-scale solar farm in 2003 through the family business, Becolux.

Next up, Ramborn will launch some unfermented drinks (because fermentation accounts for a large portion of the carbon footprint of production) — a more sustainable way of producing non-alcoholic drinks than going through a fermentation and then a de-alcoholising process, Hein says.

“The momentum is growing, and eventually we will come to a tipping point where businesses like ours are in the majority. In every company’s DNA is the willingness to survive — and using business as a force for good is one big part of the solution to the problems we face.”