Beef is naturally at the forefront of the conversation around regenerative ag because of the direct and dramatic improvement properly managed ruminants can have on soil quality. But that doesn’t mean that other foods shouldn’t be held to the same standards.

Regenerative agriculture is a system of producing food that supports the improvement of soil health over time while removing carbon dioxide from the atmosphere. In 2019, consumer awareness of regenerative ag grew exponentially. Democratic presidential candidates discussed agriculture’s role in carbon sequestration on the debate stage; and the film, Biggest Little Farm, was shown on transcontinental flights, bringing the importance of biodiversity, soil health and proper animal husbandry into the spotlight for people who had never considered themselves to be good food advocates, or even ‘foodies.’

There is a growing awareness that — contrary to industrial agriculture — regenerative agriculture is a positive force for change with respect to the environment and public health, and a tool to combat climate change. It works by utilizing crop rotations to build robust plant root systems that store greenhouse gases in the soil instead of releasing them into the atmosphere.

And yet, regeneratively raised products remain a tiny percentage of what most US consumers eat day-to-day. Beef is naturally at the forefront of the conversation around regenerative ag because of the direct and dramatic improvement properly managed ruminants can have on soil quality. But that doesn’t mean that other foods shouldn’t be held to the same standards. In 2020, consumers will be looking for accountability and transparency across all parts of the food system, many of which have been overlooked until now. Some specific areas to watch include:

Despite being the most consumed meat in the US, the poultry industry is far behind beef and pork with respect to animal welfare and environmental impact. While smaller-scale, pasture-based farms have operated on a local level for years, the ethos has not yet made it into large-scale, commercial operations. My company, Cooks Venture, is the first to attempt this. All of our birds have unrestricted access to the outdoors; and our carefully bred genetics ensure that they are healthy and strong enough to scratch, run and roost their entire lives. We are working directly with US farmers to craft a feed blend that incorporates cover crops and non-GMO grains; improving the soil over time, rather than degrading it. This type of full-lifecycle responsibility, marrying the biology of animals with the biology of the land, must become the status quo in order to meet changing consumer demands and create agricultural systems that function symbiotically with the planet.

How long has that bag of all-purpose flour been sitting in your kitchen? What kind of wheat is it made from, and where was it grown? If you know the answers to these questions, you’re right on track. In 2020, we expect more and more people to seek out freshly milled heirloom grains, raised in regenerative systems. Look for them to start showing up in the baking and pasta aisles of your grocery store, on the shelves of your local bakery, and even in craft beer and whiskey.

What industrial ag has done to land, commercial fishing has done to our waterways. Rather than simply extracting fish from oceans, rivers and lakes, in 2020 we will see a shift to intentionally cultivating aquatic plants and animals there. Unlike conventional aquaculture, which often damages wild ecosystems, regenerative aquaculture takes into account the full scope of impact that farming aquatic species can have. In our oceans, regenerative aquaculture includes shellfish such as oysters, mussels and clams, which filter up to 50 gallons of water a day; and seaweeds such as sugar kelp, which will soon rival kale and spinach as the ‘super green’ in salad bars around the country. On land, companies such as Atlantic Sapphire Salmon are innovating new ways of housing and feeding fish that conserve water and upcycle waste.

With ocean levels rising, fires raging and topsoil being washed away, there is an unprecedented level of awareness about the impact our everyday actions have on the environment. In 2020, regenerative ag will cease to be a niche option and move into the mainstream as one of the best and most critical ways we can make real progress toward a better world. Our future depends on it. 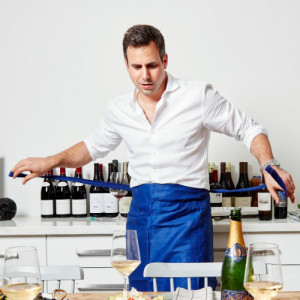 Matthew Wadiak is the founder and CEO of Cooks Venture. Matthew’s goal is nothing short of building a food system for the future, changing industrial agriculture and creating a regenerative system to reverse climate change while providing consumers with food choices that are exceptional in quality and taste.