Regenerative ag is a growing, dynamic movement that has potential for tremendous climate reversal and healthy food production. When even Neil Young says, “Put the carbon back in the soil," you know it’s time to get on board.

Farmers have been conscious of the need to regenerate and protect soils and waterways for centuries, to support expanded crop yields and livestock health and production. While some practices of the past might not meet today’s definition of regenerative agriculture or high-level criteria regarding its implementation, many initiatives — including the recycling of manure for field fertilization, water reuse for irrigation, and no-till cultivation — are not new concepts.

A holistic approach more than a defined concept

Regenerative agriculture is a holistic, dynamic approach involving conservation tilling, cover crops, crop rotation, composting, mobile animal shelters and pasture cropping, to name a few; but there is no one-size-fits-all approach. Each farm and region has different challenges and potentially different approaches to solutions.

Regeneration International defines regenerative agriculture as farming and grazing practices that reverse climate change by rebuilding soil organic matter and restoring degraded soil biodiversity — resulting in both carbon drawdown and an improved water cycle. The idea is that traditional agricultural practices such as tilling release carbon stored in the earth into the atmosphere, in addition to removing valuable topsoil. An article in Scientific American points out that “generating three centimeters of top soil takes 1,000 years; and if current rates of degradation continue, all of the world’s top soil could be gone within 60 years.” Furthermore, soil destruction creates a vicious cycle in which less carbon is stored, the world gets hotter, and the land is further degraded.

From my experiences working with our farm partners, I have come to view regenerative agriculture as the process of using the entire food cycle to enhance and improve the value of the soil, the land and all the product that comes from the land. Stonyfield Farm has a slightly different take: “Organic has always been regenerative,” says Lisa Drake, Stonyfield’s Director of Sustainability. “We think of it as more of a philosophy, as well as a toolbox that can enable farmers of all kinds to farm in a regenerative way. At the same time, it’s part of our climate strategy to lower our carbon footprint.”

We are still in the pilot stages 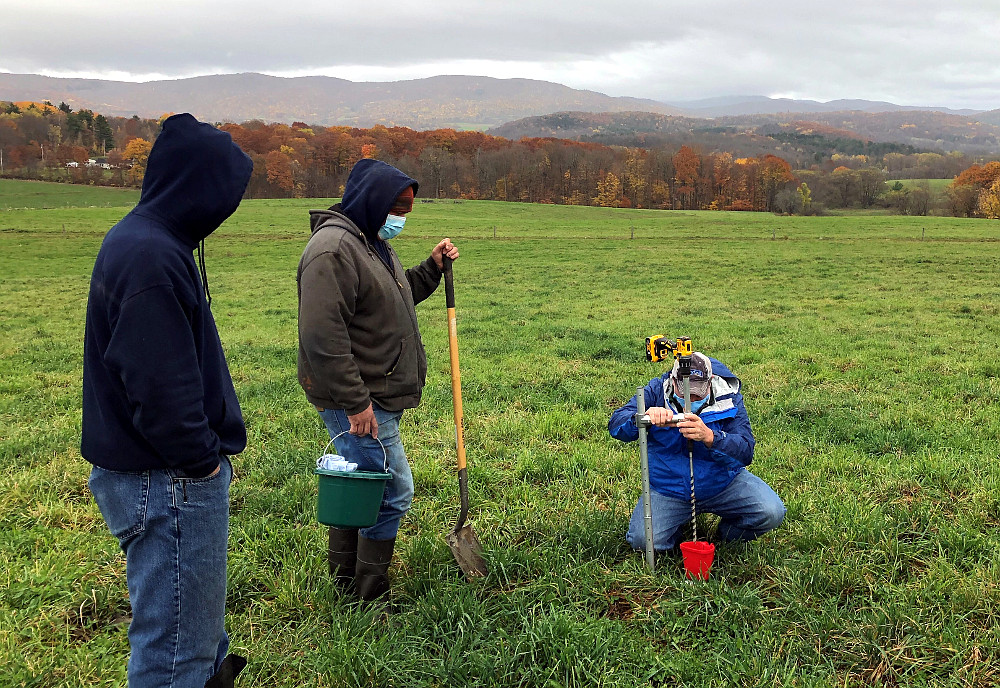 We looked for scientific studies to prove the benefits of regenerative ag; instead, we discovered individual case studies as well as numerous companies starting or about to conduct pilot case studies. In the 2018 mini documentary, A Regenerative Secret, Dr. Allen Williams of Joyce Farms describes his regenerative ranching approach — which he says has resulted in an annual increase in organic matter of .5 to 1 percent, as well as 3.5 times more forage per acre. In 2013, the Straus Dairy Farm became the first California dairy to enact a 20-year carbon farm plan with the help of the Marin Carbon Project. According to its website, the farm sequesters about 320 metric tons of CO2e annually through carbon farming. In an interview in the Marin Carbon Project, Albert Straus has “data showing increased yields from carbon sequestration practices; and the compost also adds nutrition for the crops and increases yields.”

King Arthur Baking Company of Norwich, Vermont has launched a program with a group of farmers and a mill partner. “The pandemic slowed the launch of this important initiative, but we are excited about partnering with our farmers to support regenerative agriculture growing practices better,” says Suzanne McDowell, VP of Corporate Social Responsibility and Sustainability.

General Mills is further down the path to proving regenerative agriculture. The Company initially became focused on soil health as an opportunity in 2016, following conversations with The Nature Conservancy.

“We want to leverage our scale as a force for good,” says Jay Watson, General Mills’ Sourcing Sustainability Engagement Manager. The Company is running a three-year pilot study with 51 farms across the Northern Plains of North Dakota and Canada to study changes in soil health, biodiversity and farm economics. The program, which targets 50,000 acres for regenerative management, is customized for each participant because each farm and farmer is unique. General Mills’ goal for 2030 is to have more than 1 million regeneratively-farmed acres, which represents 20 to 25 percent of its farmland. “Our goal is to have a ripple effect on our partners and to bring other organizations into it,” Watson says. “We see ourselves in a ‘convener’ role as an accelerator, enabler or catalyst.”

Stonyfield Farm has chosen to focus on developing foundational tools for farmers to accurately measure and track benchmarks that are consistent across geographies and farm types. Britt Lundgren, Director of Organic and Sustainable Agriculture, is working with Wolfe’s Neck Center — a research and education-based farm — to develop OpenTEAM because she perceived a gap between existing models and decision support. OpenTEAM is an open technology platform that aims to bring data into regenerative agriculture practice. Collaborating members include farmers, scientists, researchers and food companies, including Organic Valley and General Mills. One tool is “Quick Carbon” — a spectral analysis tool farmers can use to measure soil carbon right in the field.

Says Lundgren: “We are enthusiastic about regenerative agriculture but want to be careful about overstating the benefits; OpenTEAM will enable better, consistent data to evaluate agricultural practices.” Although OpenTEAM is still in pilot mode, its leaders are hoping to be ready for a larger rollout in two years.

The regenerative ag movement is clearly gaining momentum. Just this fall one of the world’s top producers and distributors of agricultural products, Cargill, announced its support of farmer-led efforts to adopt regenerative ag practices across 10 million acres over the next ten years. This new initiative will focus primarily on row crop rotations including corn, wheat, canola, soybeans and other staple crops. Although Cargill has been criticized for gaps in its sustainability policies; it recently joined the Science Based Targets initiative, as well as Champions 12.3’s 10x20x30 initiative. I join many in hoping that Cargill’s commitment to regenerative agriculture will be a true game-changer.

Is regenerative agriculture the next “organic”?

Regenerative Organic Certified (ROC) thinks so. Dr. Bronner’s and Patagonia worked with the Rodale Institute to establish this third-party standard to codify fair compensation to farmers and their workers, and highest standards for soil health and animal welfare. As a result of a 2019 pilot test, nine farms and products earned the ROC designation, including Dr. Bronner’s Virgin Coconut Oil and Patagonia Provisions’ Chile Mango. Critics maintain that a set of standards is at odds with a holistic approach. Ryan Zinn, Dr. Bronner’s Regenerative Project Manager, counters: “I think ROC is holistic in that it is the only approach that includes animal welfare, fair trade/worker welfare, soil health, etc. Because it is holistic, it is aspirational; few farms and ranches will be able to satisfy all these standards on their own. For us to rapidly scale out regenerative agriculture, from the high bar of ROC to regenerative tactics like conservation tillage, we will need institutional involvement such as the USDA.”

The average consumer has likely not heard of regenerative agriculture, but companies are banking on this changing over time. General Mills' Annie’s brand sells a mac n cheese that touts “this mac helps protect our planet” on the front; the backside describes the regenerative agricultural practices of the Montana farm that provided the wheat. Panelists at the 2019 Regenerative Food Systems Investment Forum agreed that while consumers may not understand how better pasture management can sequester carbon, companies moving in the regenerative direction believe that consumers will ultimately embrace that food produced using regenerative practice as healthier; a fact not yet proven. The Center for Regenerative Agriculture at Chico State recently received a grant through the California State University Agricultural Research Institute for a three-year study to investigate the impact of no-till farming practices on soil health, nutrient density, and profitability in California organic-vegetable production systems. There is a lot of research to prove the output side of regenerative ag; in the meantime, marketers are focused on the inputs. 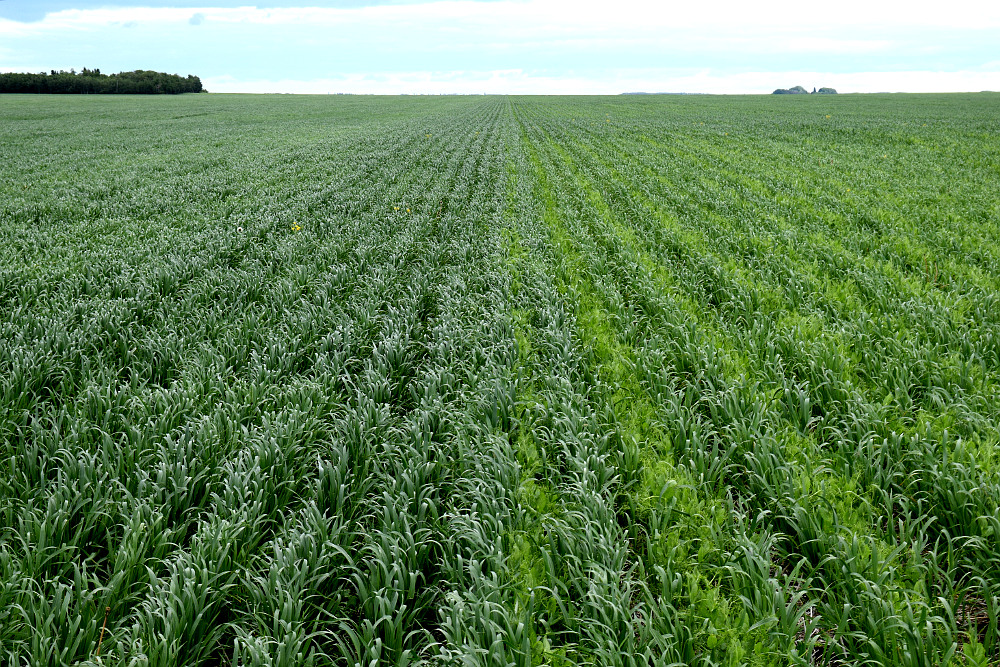 On a farm in Saskatchewan, Canada, peas are intercropped with oats on the right, compared with just oats on the left. This technique is representative of one way farmers reduce fertilizer use, improve productivity and support biodiversity. Peas are a legume, so they have a symbiotic relationship with bacteria in their roots that helps them turn nitrogen in the atmosphere into a form of nitrogen they can use to grow; so, farmers that grow legumes don’t really have to apply much or any nitrogen fertilizer on that crop. When intercropping peas and oats, they’ll apply a little nitrogen for the oats but a lot less than with just monoculture oats. | Image credit: Steve Rosenzweig

As Watson stresses: “It’s so new. You need to embrace it as a mindset. Focus on the principles and the outcomes, not a specific plan. And understand that the farmer owns the journey, not General Mills.” Companies with a stake in promoting regenerative agriculture are investing in pilot programs and tools, and are taking a collaborative approach that welcomes new partners.

Erin Callahan, Director of the Climate Collaborative, agrees that “regenerative agriculture is exciting and there is so much happening right now.” She also notes that “although it’s still early-stage, the data we have seen so far is really promising and clearly indicates that it will be a viable tool for agriculture.” Netflix’s recent release, Kiss the Ground is an uplifting documentary about the potential of regenerative agriculture, narrated by Woody Harrelson. Although the movie may not detail the science to satisfy all pundits, at a minimum the film will educate many consumers about the importance of soil health.

Zinn worries about the next generation of farmers: ”The average age of the US farmer is 58 to 60 — as they age out, what will happen to the land? We want to make the system attractive to new, younger farmers.”

Regenerative ag is a growing, dynamic movement that is gaining attention and has potential for tremendous climate reversal and healthy food production. When even Neil Young says, “Put the carbon back in the soil” (Farm Aid 2016), you know it’s time to get on board.