Published 1 year ago. About a 4 minute read.
Image: Jeswin Thomas/Pexels

SBTi target-setters are ahead of schedule: Since setting targets, these companies have reduced their annual emissions 25% since 2015 — a rate that exceeds the rate needed to limit warming to 1.5°C.

A new analysis released this week of 338 companies, out of the 478 total companies with targets approved by the Science Based Targets initiative (SBTi), shows for the first time that companies that have set science-based targets are delivering emissions reductions in line with the most ambitious goal of the Paris Agreement.

The 338 companies analyzed (including AT&T, Caesars Entertainment, CVS Health, Electrolux, General Mills, Hewlett Packard Enterprise, Nestlé, Novo Nordisk, PepsiCo, Procter & Gamble, Stanley Black and Decker and Unilever, to name a few) collectively reduced their annual emissions by 25 percent between 2015 and 2019 — a difference of 302 million tonnes, which is equivalent to the annual emissions of 78 coal-fired power plants — in contrast to an increase of 3.4 percent in global emissions from energy and industrial processes over the same period (see Fig 1, below). This exceeds SBTi’s estimates for potential emissions reductions from this time last year. 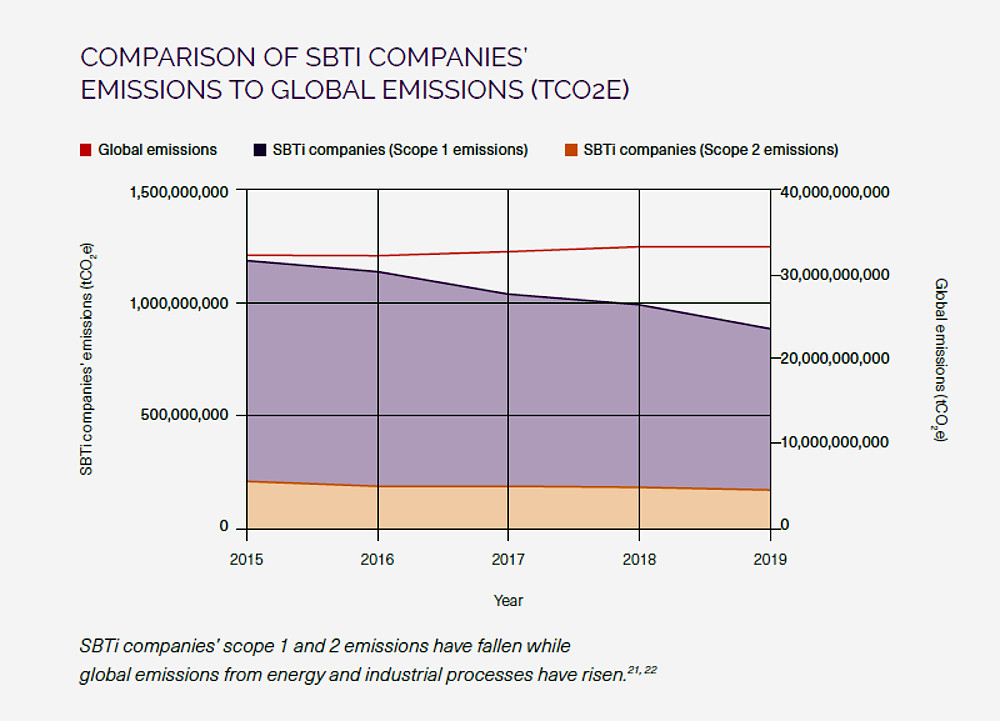 SBTi says that last year, with all of the challenges introduced by the ongoing COVID-19 pandemic, was a milestone year for science-based climate commitments: The rate of adoption doubled in 2020, versus 2015-2019 — over 1,000 companies, making up 20 percent of global market capitalization, have now set, or committed to set, a science-based target. Amazon, Facebook and Ford are among the over 370 companies that joined the SBTi in 2020.

This is the first-ever study to look at how setting science-based targets correlates with corporate emissions reductions and the extent to which companies are actually delivering on those targets. SBTi found that the typical company with SBTs actually slashed direct (scope 1 and 2) emissions at a linear annual rate (6.4 percent) that exceeds the rate required under the SBTi’s criteria to meet 1.5°C-aligned warming scenarios (4.2 percent). Additionally, more companies are raising the ambition for their targets: 41 percent of all SBTi companies have 1.5°C-aligned scope 1 and 2 targets, vs a 2°C pathway.

The research also suggests that science-based targets are catalyzing system-wide change — including large-scale investment in mitigation activities and a greening of global supply chains. The planned emissions reductions of companies with approved science-based targets will channel up to US$25.9 billion of new investment into climate-mitigation initiatives in the next decade.

“Today’s findings are a mark of progress at the beginning of a critical year for climate action. It shows that companies setting science-based targets are backing these commitments up with action — delivering the emissions reductions we know are vital if we want to meet the goals of the Paris Agreement. SBTi companies have cut their emissions by a quarter over the last five years — and we need more companies to follow in their footsteps. With COP26 on the horizon, now is the time for the private sector to step up to the plate and follow the science. If a company is genuine about protecting the climate, then it should be setting science-based targets.”

Progress has been particularly strong in developed economies: In 16 OECD countries, a critical mass of 20 percent of high-emitting companies setting science-based targets has now been reached. In 2020, this 20 percent threshold was also reached in six new sectors — including the high-emitting and hard-to-abate cement and concrete sector. However, there is huge potential to further scale up action and improve progress in high-emitting sectors such as construction and automotive.

The global picture also shows that some regions are lagging, in terms of commitments. In Europe, a critical mass of corporates with Paris-aligned climate commitments has been reached: 34 percent of all companies with the greatest climate impact have committed to, or set, SBTs; in contrast to just 16 percent in North America and 12 percent in Asia.

"This will be a crucial year for climate action, and we believe the private sector has a vital role to play in the transition to a zero-carbon economy. That's why we updated our target with the SBTi and have aligned our ambition — across our whole value chain — with a 1.5°C world," says Kristina Kloberdanz, Chief Sustainability Officer at Mastercard, one of the SBTi companies analyzed. "We are already making progress toward this target by focusing on key areas of our business, including decarbonization of our operations and supply chains, while also leveraging our technology and global network to make a positive impact on the environment at scale. Today's data shows that increasingly more corporates are stepping up their role in this collaborative effort to address the climate challenge — and as an SBTi company, we're proud to be at the forefront of this change."

Of course, progress reporting is critical to the credibility of companies’ science-based targets — it provides a complete picture of overall emissions reductions, as well as where companies may be failing to meet their goals. As we move into this critical decade for climate action, tracking progress on emissions reductions is vital. Encouragingly, SBTi says the vast majority of companies (87 percent) that have had science-based targets for over a year have publicly reported progress against these goals in some form.