Supply Chain
Supply Chain Sustainability 2.0 – Who Will Be the First?

Mark McElroy
Published 10 years ago. About a 6 minute read.

Most of us who visit these pages are quite familiar with how Walmart used its influence to drive sustainability improvements in its supply chain. But were the gains really about sustainability at all? Strictly speaking, no.

Indeed, the most anyone can say about the effects of Walmart’s strategy on its supply chain is that improvements in eco-efficiency, ethical sourcing or what have you may have been made (all good things), but not necessarily in sustainability performance, per se. Costs, too, may have declined and that's always a good thing as well. But to equate decreases in, say, the carbon or water intensity of products with improvements in sustainability performance is to make a serious category error.

To be clear, eco-efficiency is about resource use. Sustainability, by contrast (in the ecological sense), is about resource use compared to resource availability – at no time were Walmart’s suppliers asked to measure or report their performance in those terms. Thus, Walmart’s Supplier Sustainability Assessment is perhaps better thought of as a Supplier Eco-Efficiency Assessment.

Further, it is more likely the case that advances in the eco-efficiency of manufacturing operations brought on by Walmart’s strategy caused setbacks in supply chain sustainability performance, not gains. Why? Because along with improvements in eco-efficiency typically come decreases in manufacturing costs for producers (a good thing) and greater levels of product affordability for consumers (another good thing).

But with improved levels of affordability also come higher overall levels of consumption and energy and material throughputs in the economy (a very bad thing). Wastes, too, can increase for the same reasons.

So while impacts per product may go down, overall impacts can go up – and usually do. Such reverse and unintended consequences are sometimes referred to as the Jevons Paradox, a phenomenon in which gains in efficiency leads to setbacks in sustainability.

Here we can see that while Walmart may have had the best of intentions in mind when it set out to drive improvements in the sustainability of its suppliers, whether or not it actually managed to do so is debatable and may never be known. It may never be known, that is, because virtually none of the companies involved (i.e., the tens of thousands of companies in Walmart’s supply chain) actually measure their own sustainability performance, per se.

Rather, when it comes to measuring and reporting their social and environmental impacts, most companies focus only on their marginal or relative performance (e.g., their eco-efficiency), not their sustainability performance, because that’s all Walmart or anyone else expects them to do. Think of this as Supply Chain Sustainability 1.0.

Now what if, on the other hand, Walmart wanted to take its strategy to the next level – a level of true sustainability – by encouraging its suppliers to measure and report their sustainability performance in more rigorous or authentic ways? Not just in terms of eco-efficiency, mind you, but in terms of sustainability, per se. And what if manufacturers did, too – companies like Procter & Gamble, Nike, SC Johnson, Whirlpool, Unilever, Kraft, Coca-Cola or Seventh Generation?

What if these companies and others, instead of merely asking their suppliers to make marginal improvements in their social and environmental performance, incentivized them to improve their sustainability performance, per se, and then rewarded the ones who did?

Think of this as Supply Chain Sustainability 2.0 – a genuine paradigm shift in corporate sustainability management, and a new strategy for how large retailers and consumer product manufacturers could drive improvements in the sustainability performance of business and industry throughout the world in an unprecedented way.

How, though, would this next-generation of supply chain sustainability work? In what way would it be substantively different from Supply Chain Sustainability 1.0? The answer, I suggest, is in the degree to which context-based sustainability (CBS), a cutting-edge approach to measuring, managing and reporting the sustainability performance of organizations, would be featured in 2.0, a concept completely missing from 1.0, but whose time has come.

What most distinguishes CBS from other forms of sustainability management is the manner in which it measures, manages and reports performance against norms, standards or thresholds for what performance would have to be in order to be sustainable. Such criteria, in turn, are rooted in an understanding of whom an organization’s stakeholders are, and what an organization’s impacts are, or should be, on resources of vital importance to their well-being (see Figure 1). 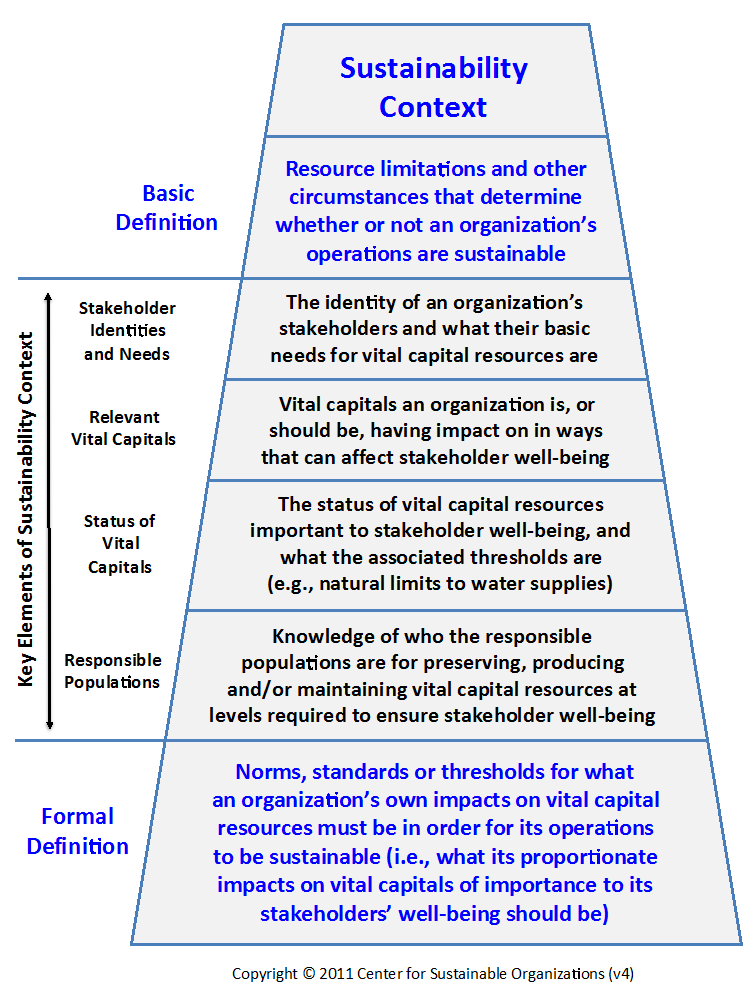 No other approach to sustainability management does this, nor is there any more promising frontier for leveraging or exploiting the effects of CBS than in the supply chains of major retailers and manufacturers. The potential for sweeping and revolutionary change here is breathtaking.

The irony of CBS, though, is that it really isn’t a new idea at all, nor is it foreign to sustainability management methods already in use. The Global Reporting Initiative (GRI), for example, has been calling for the inclusion of sustainability context in corporate reporting for years – calling for it, but not enforcing it.

What is new, then, is the prospect of having retailers and manufacturers – companies like Walmart, Procter & Gamble, Target and the rest – actually embrace CBS and require their suppliers to do so, as well, if only experimentally on both fronts. Indeed, this move could have a game-changing effect on the sustainability of industry, no matter what the pace of adoption is. Context changes everything!

Consider, for example, a company’s use of water. In most cases, water use is measured, managed and reported without regard to any ecological limits at all. Less water used this year than last, or per unit of production this year than last, is considered good enough, and that’s all there is to it.

CBS, by contrast, starts with where a business is located, how much renewable water is in the watershed, and what the size of the population is that must share it. An equitable share of available water is then allocated to the business, against which actual usage is measured. Issues abound under this approach, I know, but they are not intractable. Experience has shown otherwise, and not just for water.

Central to the concept of sustainability, then, is the idea that there are norms, standards or thresholds that must be adhered to if human behaviors are to be sustainable. This is the essence of CBS, and the logical, if not inevitable, form of what the “next” generation of corporate sustainability must be.

Only question is, who will be the first to embrace it? Will it be Walmart? Procter & Gamble? Costco? Unilever? Kraft? Coca-Cola? Seventh Generation? And will 2012, in fact, be the year in which Supply Chain Sustainability 2.0 makes its debut? Let’s hope so.