Sustainable Brands
Published 3 years ago. About a 7 minute read.

We jump-started an incredibly action-packed week here at SB'17 Detroit with powerful plenaries from thought leaders, researchers and on-the-ground change-makers working to Redefine the Good Life in Detroit and beyond.

It’s no accident that Sustainable Brands ‘17 is being held in Detroit! The city is a case study in progress on how to Redefine the Good Life. During the opening night plenary, local entrepreneur Pashon Murray shared how she is playing a role through tackling food waste and creating new economic opportunities in the city.

Murray had an understanding of sustainability from an early age. She grew up in Grand Rapids, in Western Michigan, going to the landfills with her father. “Little did I know that those trips to the landfills would have such an impact on my life,” she said. “I remember asking [my father], are they just going to keep dumping and dumping stuff?”

Years later, Murray founded Detroit Dirt, which focuses on a huge part of this problem - food waste. Murray shared with the audience how she and her co-founder build the organization from scratch and have made it force for good in Detroit - and how they plan to grow until the city has no more wasted food.

Learn more about Detroit Dirt and their amazing work here.

The Good Life, Through the Lens of Global Sustainability Leaders 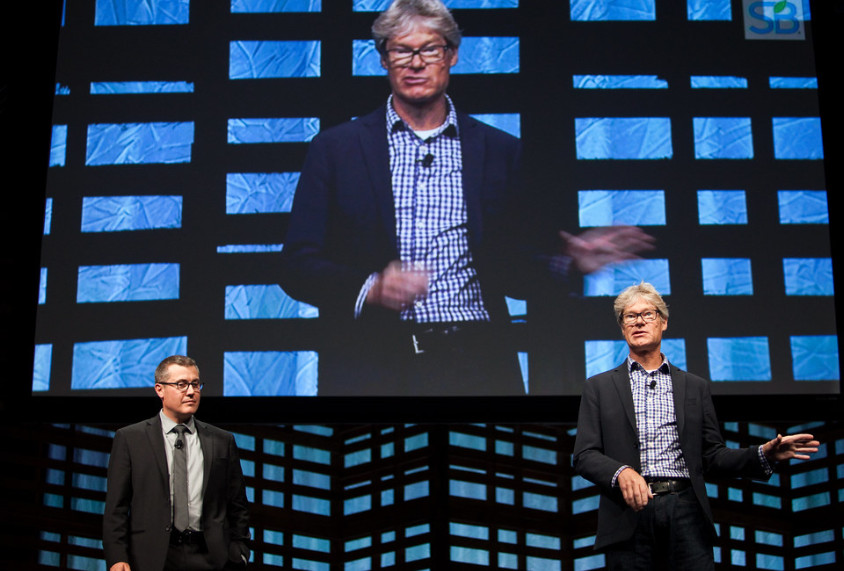 Next, SustainAbility’s Mark Lee and GlobeScan’s Eric Whan presented brand-new insights on leaders’ perceptions and expectations around the state of sustainable business globally, through a pre-release of the 2017 Sustainability Leaders Survey by GlobeScan and SustainAbility in partnership with Sustainable Brands.

The hot-off-the-press research revealed 2017 results as well as a snapshot of progress over time on the occasion of The Sustainability Leaders Survey’s 20th anniversary. Lee and Whan presented key quantitative highlights collected from a worldwide panel of 1,035 sustainability experts – including corporate, service consultants and academia – across industries and 80 countries from March to April 2017:

It is a growing expectation that leading companies will increasingly take on “advocacy” behavior as part of integrating sustainability into business strategy and implementation. This relates to the importance of company performance on “vision” and “goals.” Vision, Performance & Trust are three attributes that define characteristics of leading sustainable companies. SustainAbility and GlobeScan predict that integration is the key attribute that defines leading sustainable organizations in the next ten years. Complementary in an immediate audience poll, “innovation,” “commitment” and “courage” rose to the top as attributes defining corporate sustainability leadership. Who will be the next set of breakthrough leaders? 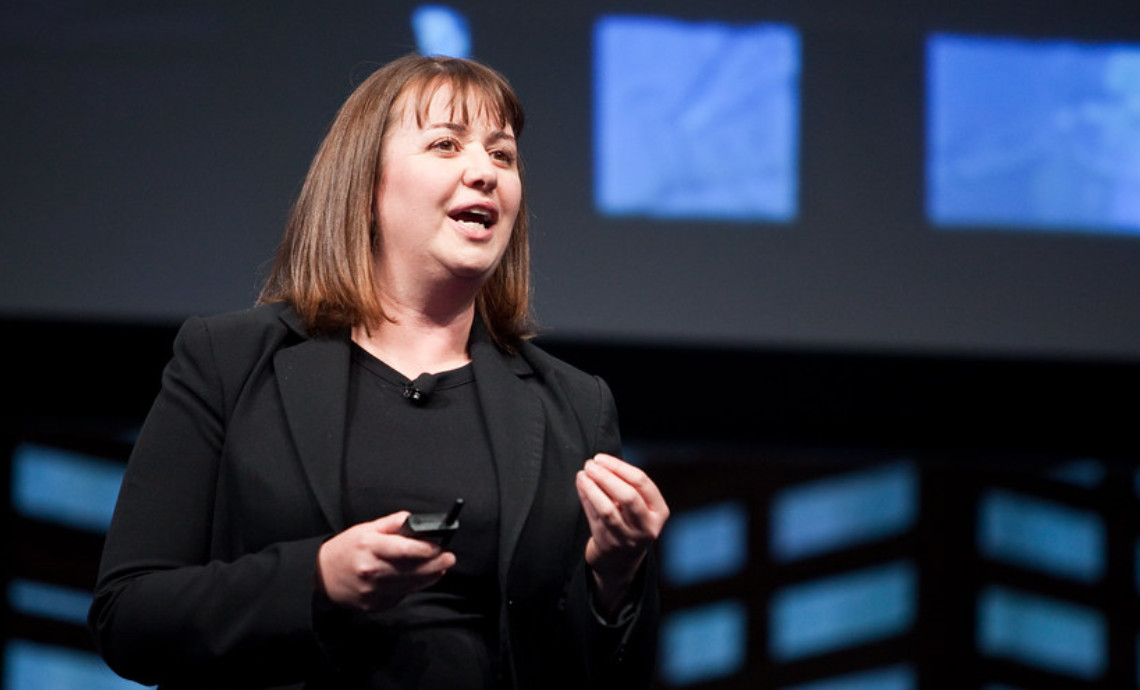 After launching an ambitious new mission to reverse climate change (time frame: 2016–until its done), Chief Sustainability Office Erin Meezan told attendees Interface decided to survey experts and emerging sustainability leaders to see what they thought. The results? 95 percent of climate experts and 91 percent of emerging leaders agreed that it is possible to take back the climate and make a climate fit for life. Why? 57 percent of experts said, “because we already have what we need to do it” and 45 percent of emerging leaders said, “because we believe in humanity.” The biggest barrier to progress: 34 percent of experts identified “business as usual” as the biggest barrier to reversing climate change, while 15 percent said “we will never take it back unless we believe we can.”

Meezan and Interface believe that we need a new story to help to get us over these barriers, and re-frame the challenge with optimism. We have the solutions, and the experts believe that we can achieve the bold goal of taking back our climate, so Meezan urged us all to plow ahead!

Why and How Brands Need to Equip Themselves for Continuous Reinvention (or, Ditching the Devil You Know) 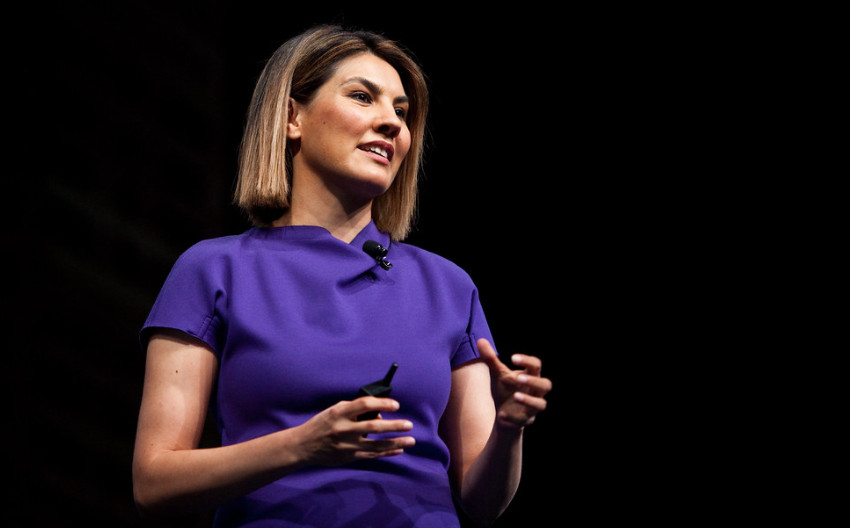 Jumping off from McDonough’s utopian vision was Nadya Zhexembayeva – investor, educator, author of Overfished Ocean Strategy and Embedded Sustainability, and Chief Reinvention Officer at WE EXIST – who painted a much darker picture by comparing her youth and family history in Kazakhstan to the history of business, right through to the corporate playing field of today. When her grandfather was a child, 40 percent of the population of Kazakhstan was killed, on purpose, by a famine engineered by the government. Then, during the collapse of the Soviet Union, she asserted that three people "signed away the country's future" - no currency, no police, no laws. So, when the population was faced with the need to reinvent themselves, it was overwhelming; many committed suicide. People wanted to hold on to the horrible present to which they were accustomed, rather than leap into an uncertain future, no matter what it promised. This proved to Zhexembayeva that people innately are afraid of change, and sometimes resist change so much that it affects, or ruins, their entire lives.

But back to business... Now, it's not people killing themselves – it's companies. Kodak. Borders. Lehman Brothers. Hummer. Blockbuster. Sometimes, companies are more willing to "commit suicide" than to face the reality of change and reinvent themselves. In 2017, we see new demands in the form of natural resource limits, regulations, and customer expectations, all of which require innovation and flexibility to extend the life of the business. Surprisingly, the vast majority of businesses do not survive long (i.e. 89 percent of the original Fortune 500s are now gone). The average lifecycle of business in our current model of capitalism has been about 75 years, but that's quickly shortening. Now, telecom has an average business model cycle of only 12 months! We must discover new, innovative solutions, in order for our brands to survive and flourish. So, Zhexembay challenged the attendees of SB’17 Detroit: “Ask yourself, ‘What do you want to let go of and what do you want to preserve?’"

'Less Bads, More Goods': How and Why ‘Getting the Frame Right’ is Essential in Design for the Good Life 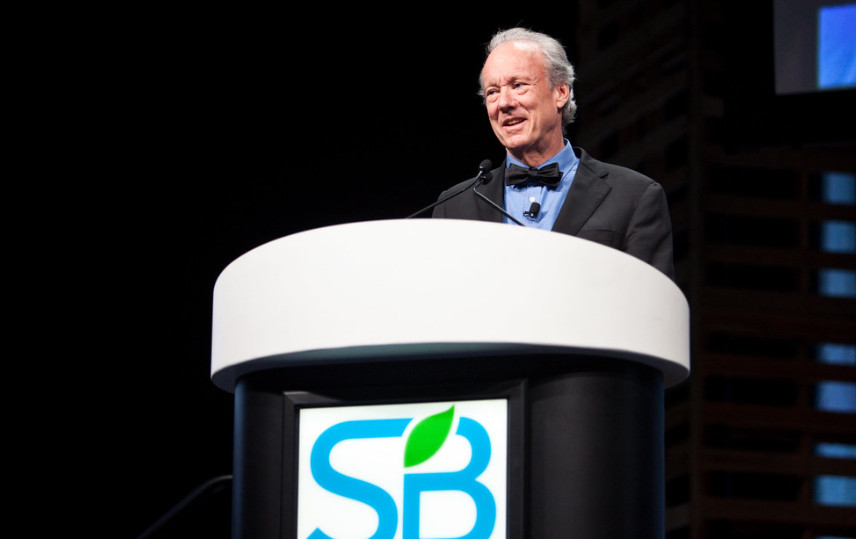 Instead, he said, we should flip the script and aim for ‘more good,’ specifically five goods: materials that elicit safety and health; an economy that is circular, sharing and shared; energy that is clean and renewable; water that is clean and available; and lives that are safe, creative, and dignified.

This involves also flipping the script with regards to our approach to carbon – he has proposed a new framework in which we acknowledge and leverage it as an asset, rather than as an enemy. And our products and their packaging should be designed for what’s next - back to nature or recycled into a next life: L’Oreal has figured this out with their new Biolage shampoo and conditioner – both recently Crade to Cradle Certified Silver.

FROM PURPOSE TO ACTION: BUILDING A SUSTAINABLE FUTURE TOGETHER
One Life Is Not Enough for Plastics: How Dow Is Designing for Recyclability