Published 2 years ago. About a 7 minute read.
Image: Aerial view of a large burned area in the city of Candeiras do Jamari in the state of Rondônia on August 24, 2019. | ©Victor Moriyama/Greenpeace

New CDP research says industry 2020 zero-deforestation commitments are now impossible; and Councilmembers and Indigenous activists in New York and LA call for a boycott of Brazilian meat companies and a shift toward plant-based diets. 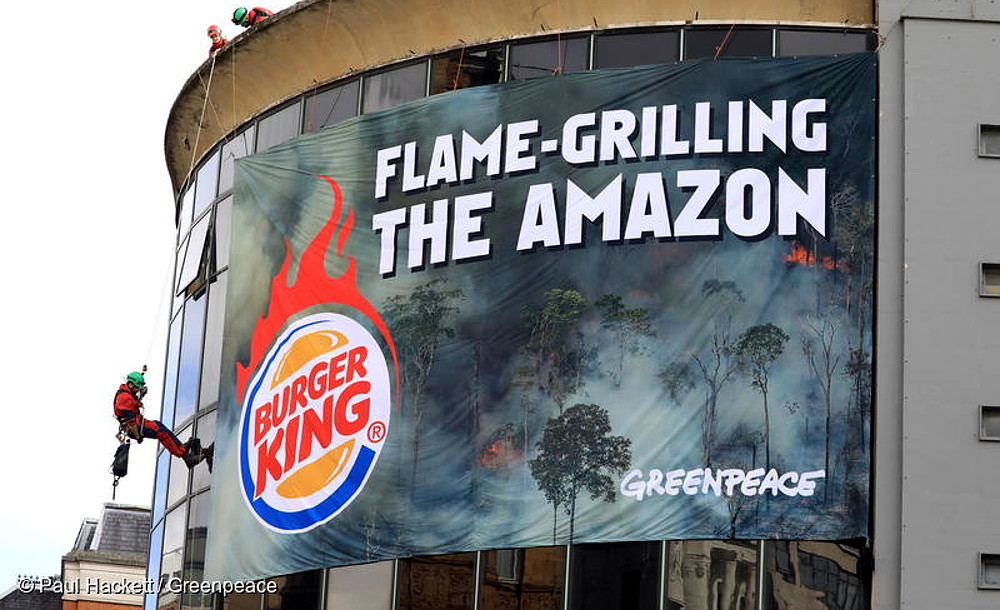 The world’s global consumer goods companies are decidedly not on track to achieve goals of sustainable consumption and production by 2030; and industry commitments to zero net deforestation by next year are now impossible, according to new research by CDP.

The CDP Consumer Deforestation Report, No Woods for the Trees, analyses 22 companies according to scale and commodity use in the consumer goods sector, including Food Manufacturers, Personal & Household Goods Manufacturers and Fast Food Retailers. Due to their proximity to the consumer, they face reputational risks from commodities linked to deforestation, with potential risks to revenues. They also face operational risks from disruption in the supply chain, especially in Asia and South America.

Despite the net zero deforestation target for 2020 set by the Board of the Consumer Goods Forum, only eight companies were found to be deploying comprehensive forest and land-use management practices (including regenerative agriculture and soil management). And increasing consumer demand for transparency around sourcing threatens traditional business supply chain models.

These global consumer-facing companies are particularly exposed to ‘soft commodities’ linked to deforestation — so-called Forest Risk Commodities (FRCs) — with palm oil, soy and cattle playing a major role in product formulation; and paper and pulp products essential to product packaging and marketing. According to CDP, leading companies including Nestlé and Procter & Gamble have acknowledged that they will fall short of the 2020 deforestation goal; CDP’s research shows that just three companies achieved 100 percent certification in palm oil and just one in timber.

While companies’ ambitious targets indicate they understand the need for action on deforestation, none are taking concrete steps to significantly reduce deforestation risk in their supply chains. European companies including Danone, Nestlé, Unilever and L’Oréall — with larger reported revenue and supply risks related to FRCs — focus on sustainable production innovations and have more robust governance of deforestation-related risks. But not all stakeholders are considering the hidden use of FRCs within their supply chains.

Companies such as Tyson Foods and Restaurant Brands International (owner of Burger King) rank last, thanks in part to their indirect exposure to soymeal through animal ingredients and there is insufficient labelling for animal derivatives in consumer goods (including bovine). These FRCs represent as much as 30-40 percent of procurement costs for some companies and margins could be significantly impacted by price volatility or increased price differentials between certified and non-certified products.

“When it comes to deforestation and consumer goods, the go-to is palm oil; revenue exposure due to palm oil can be significant. 45 percent of companies reported revenue dependencies of at least 20 percent on palm oil,” said Carole Ferguson, Head of Investor Research at CDP. “But leading global consumer goods companies need to look closer at all the hidden risks they are running across their supply chains and scratch below the surface. As we approach our planetary boundaries, much more needs to be done upstream. These companies are well placed in the value chain to act and fast. That starts with full and deep transparency of supply chains for companies to hold producers to account and provide consumers with full sourcing and product visibility.” 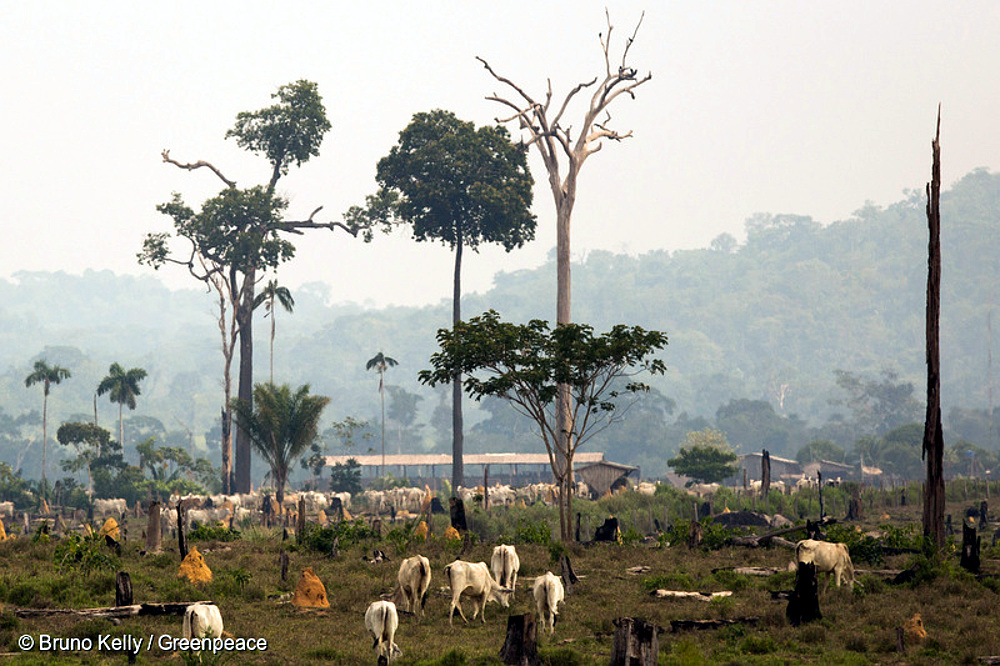 Meanwhile, last week LA City Councilmembers Paul Koretz and David Ryu joined Indigenous leaders and local activists to demand the City of Los Angeles cease ties with any businesses linked to the horrific Amazon wildfires and Indigenous murders, which have been spurred by rampant animal agriculture. Rallies were held in both LA and New York City to call for a change in policies and behaviors that contribute to this existential threat, and to call on the other 35,000 cities in the US to join a boycott of Brazilian meat companies.

“Today, our two largest cities call for the other 35,000 cities in the United States to join us in our boycott of Brazil, its cattle industry and the reckless corporations profiting from deforestation, murder and climate madness.  If we lose the Amazon, we lose our critical carbon-sequestration defense, and we lose the climate fight. Period,” Koretz said. "Let’s see if, by year's end, our entire country of cities can join us and show the Brazilian government how much we honor, respect and vitally need the Amazon Rainforest and its Indigenous Peoples for our continued wellbeing."

An uptick in meat demand in developing economies has spurred South American cattle ranchers to clear more of the Amazon for grazing and feed crops. Forest fires throughout the Amazon have jumped 80 percent jump since last year, putting vital resources and lives at risk. The Brazilian National Institute for Space Research recorded over 41,000 fires throughout the country as a result of this clearing. The Amazon’s trees play a vital role in absorbing CO2 emissions; without them, those emissions are left to exacerbate climate change. Matters stand to only worsen as meat demands skyrocket — which is especially true regarding beef, demands for which increase 5 percent each year, according to the UN Food and Agriculture Organization.

US diets stand to drive up global temperatures higher than Paris Climate Agreement targets, largely because they include high levels of animal products, according to a 2014 study; leaders who spoke at the LA rally called on locals to do their part by reducing how much meat, dairy and eggs they consume.

“As consumers, as cities and as global citizens, we have a choice — we can continue to feed an industry that is destroying the Amazon rainforest and its Indigenous Peoples, or we can stand together and fight for it,” Ryu said. “There is no back-up Amazon Rainforest. The choices we make today will decide the fate of this incredible ecosystem, and the fate of our atmosphere as a whole. I’m proud to be a part of this global movement to save the one and only Amazon Rainforest."

This is just the latest business action aimed at ending rampant deforestation practices in the Amazon and holding offending companies to account: In August, clothing giant VF Corporation — parent company of apparel and shoe brands Timberland, Vans and The North Face — announced that it will no longer buy leather from Brazil; the company said the Amazon fires are evidence of lax environmental governance policies that are not only allowing, but encouraging, the country’s businesses to contribute to the destruction of the world’s largest rainforest. Then, in September, the world’s largest responsible investor group began appealing to companies doing business in the Amazon to end the manmade fires raging through the forest. But the fires — and the practices that created them — continue.

“We are facing a climate emergency, and we can’t continue business as usual while the planet burns. We urge both city agencies and local businesses to cut ties with any company linked to the multinational corporations responsible for the fires still raging throughout the Amazon Rainforest,” said Brooklyn Borough President Eric L. Adams. “Each individual consumer choice, corporate decision and legislative policy must be geared toward making our planet more sustainable and habitable for generations to come. But we can only achieve this together. What we eat matters. Who we do business with matters. This resolution is a first step in opening a broader conversation about how we overcome one of the most significant challenges humanity has ever faced.”