Having recently highlighted the importance and impacts of healthy ecosystems on tourism, as well as the role travel companies and their customers must play in preserving our global destinations, we love this story about two companies doing just that in Peru.

Inkaterra, Peru's leading sustainable tourism and hotel development group, as part of an ongoing partnership with beverage giant AJE Group, has announced that the venture has made Machu Picchu Pueblo (aka Aguas Calientes) the first city in Latin America to manage 100 percent of its solid waste.

In a blog post last week, Inkaterra detailed the partnership’s latest project — launched earlier this month: The first organic waste treatment plant in Machu Picchu Pueblo will make the area the first to manage 100 percent of its solid waste through pyrolysis, which decomposes the waste at high temperatures without oxygen; the plant has the capacity to process seven tons of waste per day to generate bio-coal, a natural fertilizer that will help with the reforestation of the Andean cloud forest and contribute to agricultural productivity in Machu Picchu.

"We are very happy to be part of this change in the city of Machu Picchu; and to be able to announce that, with this new plant, the circle of sustainability for which we have been working for three years is closing. Machu Picchu officially becomes a 100 percent sustainable model city in Latin America," Jorge Lopez-Doriga, AJE Group's Executive Communications and Sustainability Director, told Travel Daily News.

Since its founding in 1975, Inkaterra — with properties in the heart of the Machu Picchu cloud forest, deep in the Amazon rainforest, in the city of Cusco and in the Sacred Valley of the Incas — has aimed to create to authentic travel experiences, while preserving biodiversity and local cultures in Peru. Based on a replicable business model of low initial cost and high positive impact on local communities, Inkaterra’s multi-pronged sustainability efforts have gained the group membership with alliances such as Relais & Châteaux, Virtuoso and National Geographic Unique Lodges of the World.

The first Peruvian enterprise to be declared carbon neutral (1989), Inkaterra mitigates the effects of deforestation in the Amazon rainforest via carbon sequestration through the preservation of Peru’s first ecological concession, with more than 10,000 hectares of virgin rainforest.

Along with initiatives such as Earth to Table — in which guests at Inkaterra Hacienda Urubamba are invited to pick their own produce to reduce the amount of chemicals, as well as plastic packaging, surrounding their food — Inkaterra is committed to removing single-use plastic at all of its properties by the end of 2019, starting now with eliminating straws and serving most beverages in glass bottles rather than plastic. In cooperation with the nonprofit Inkaterra Asociación and AJE, since 2017 the hotel group has helped to manage and recycle the abundance of plastic waste left by tourists visiting Machu Picchu via a compacting machine, housed in Machu Picchu Pueblo, which the company says has become a key asset in addressing the waste-management crisis that led to the site being evaluated for UNESCO’s list of World Heritage in Danger in 2016. The plant processes 14 tons of plastic daily, according to Travel Daily News. 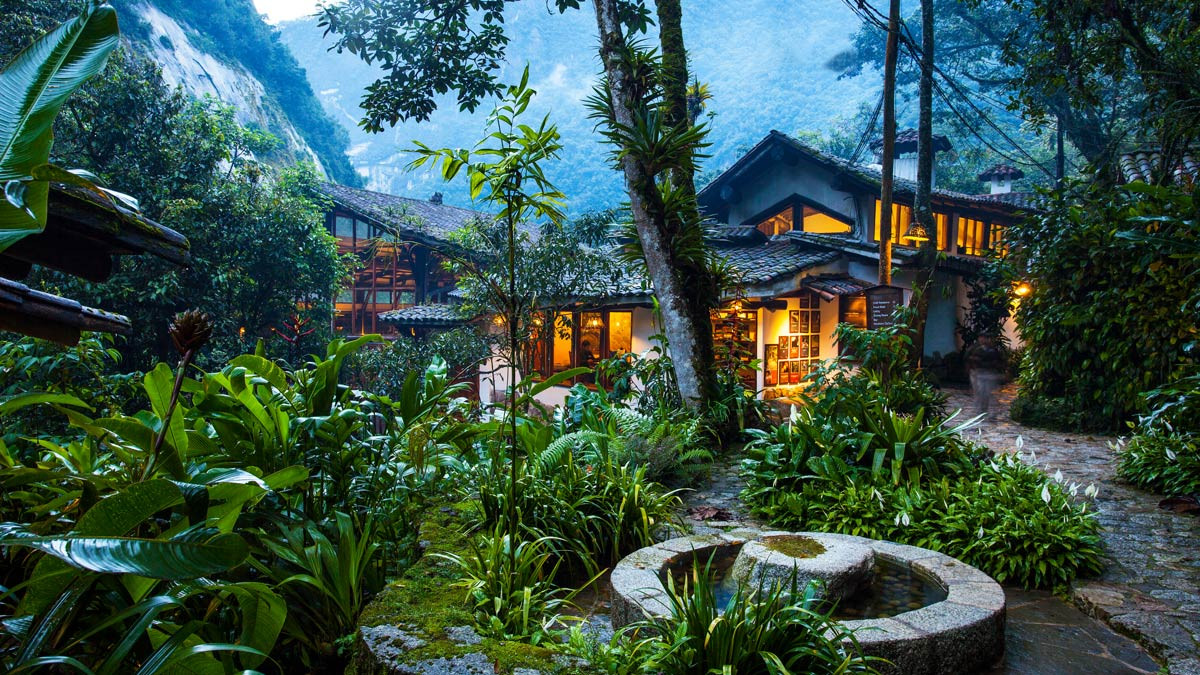 The Inkaterra Machu Picchu Pueblo Hotel is also home to a biodiesel production plant, which processes burnt cooking oils — donated by local communities, hotels and restaurants — into biodiesel, which is helping to avoid oil spills in the Vilcanota River, which faces the hotel. The plant produces 20 gallons of biodiesel daily from nearly 6,000 liters of used oil a month. The glycerin obtained in the biodiesel-production process is also used by the city to clean stone floors, thus replacing chemical products.

"The strategic alliance between Inkaterra, the AJE Group and the Municipality of Machu Picchu aims to change perception of our wonderful city into a sustainable destination and become an example of management for ecotourism worldwide,” Inkaterra founder and CEO Jose Joechlin told Travel Daily News. “We have managed to awaken the ecological conscience of the local community, which now segregates waste from homes and establishments. [With the organic waste treatment plant], we present an innovative technology that will contribute to traditional agriculture and help restore the Andean cloud forest in Machu Picchu.”

According to Travel Daily News, these cumulative efforts to turn Machu Picchu into a model for sustainability won the Peruvian Lideres + 1 prize; and, in Germany, the prestigious Die Goldene Palme award for Responsible Tourism.