The Next Economy
SB’19 Montevideo:
The Road to a Healthy World Is Paved with ‘Transformative Promises’

In the first gathering of the Sustainable Brands community in Uruguay last week, change agents from a wide swath of perspectives shared their visions of what’s necessary to course-correct our way to a healthy, flourishing future — and where the power really lies in driving change. 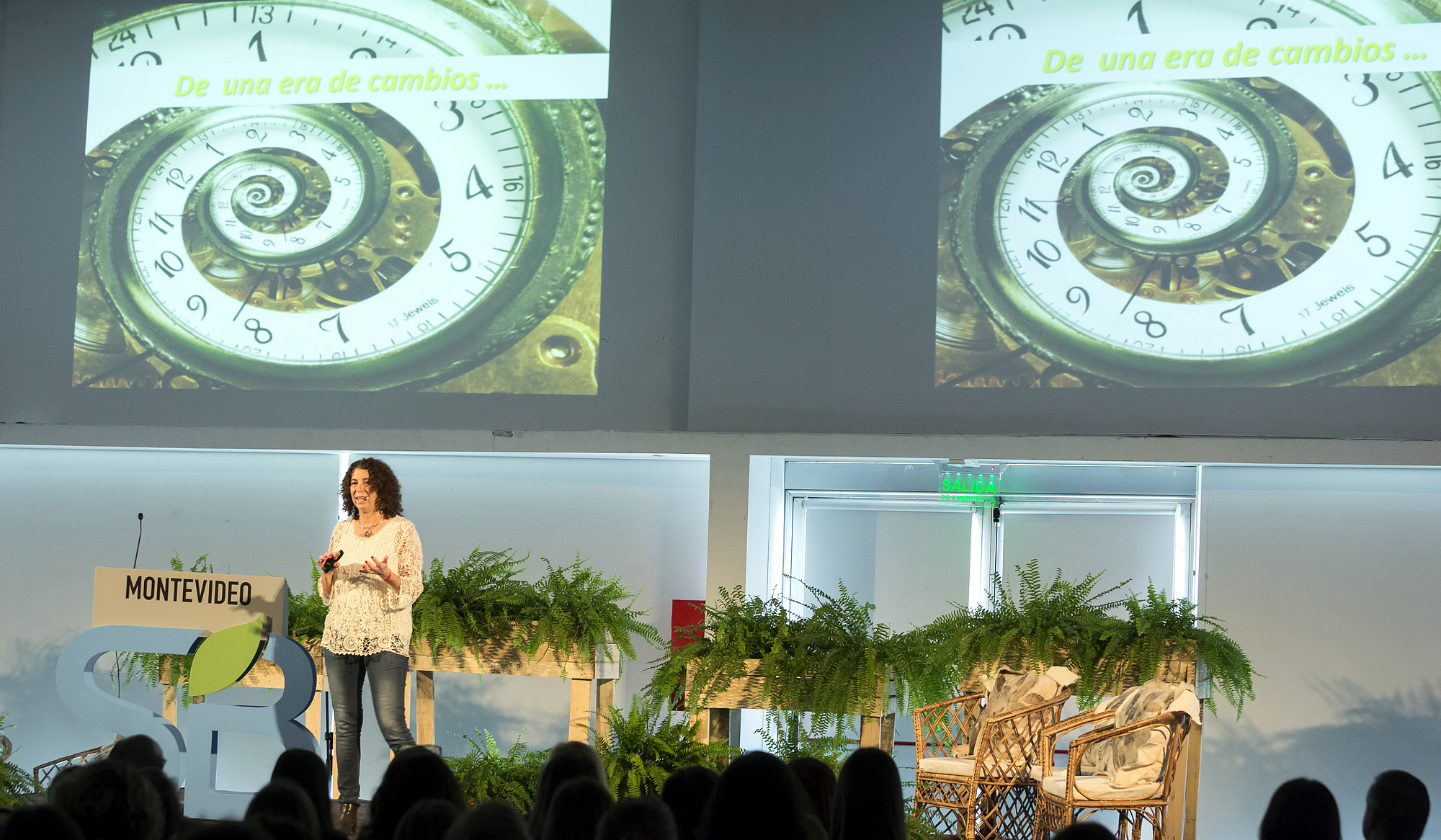 Jaqueline Pels takes us "from an era of change ..."

First, Jaqueline Pels, director of the think tank Espacio Negocios Inclusivos (Space for Inclusive Businesses) at Universidad Torcuato Di Tella in Buenos Aires, kicked us off by explaining what it would take for us to move from an era of change to a change of era — and why that is needed.

Whereas an era of change is comprised of incremental changes, a change of era is characterized by radical transformation. She cited examples in a number of categories:

A change of era, Pels explained, has three features:

In essence, we need to tuck in and break away from dichotomic thinking, as we prepare to shift into La Era del Proposito — the “Era of Purpose.”

From there, a major theme of the day was emerging models for healthier economies — some of which are already proving their worth.

Maria Jose Gonzalez, an environmental engineer and public sector consultant, explored ways in which Uruguay is making what she calls “a necessary conversion” — to that of a circular economy.

As Gonzalez pointed out, our current situation — a combination of worsening resource scarcity + waste management issues + environmental pressures + climate change — is one that answers its own question if we look to nature as a model. She is coordinator of Proyecto Biovalor — a 4-year project of the Uruguayan government exploring the transformation of waste generated from agricultural, agro-industrial and small population centers, into energy and/or other value-added products, in order to develop a sustainable model of low emissions. Gonzalez pointed to a project turning grape must — a waste byproduct from wine production (in this case, tannat) — in Uruguay into a nutritious, versatile flour as a perfect example of circular economy in practice. 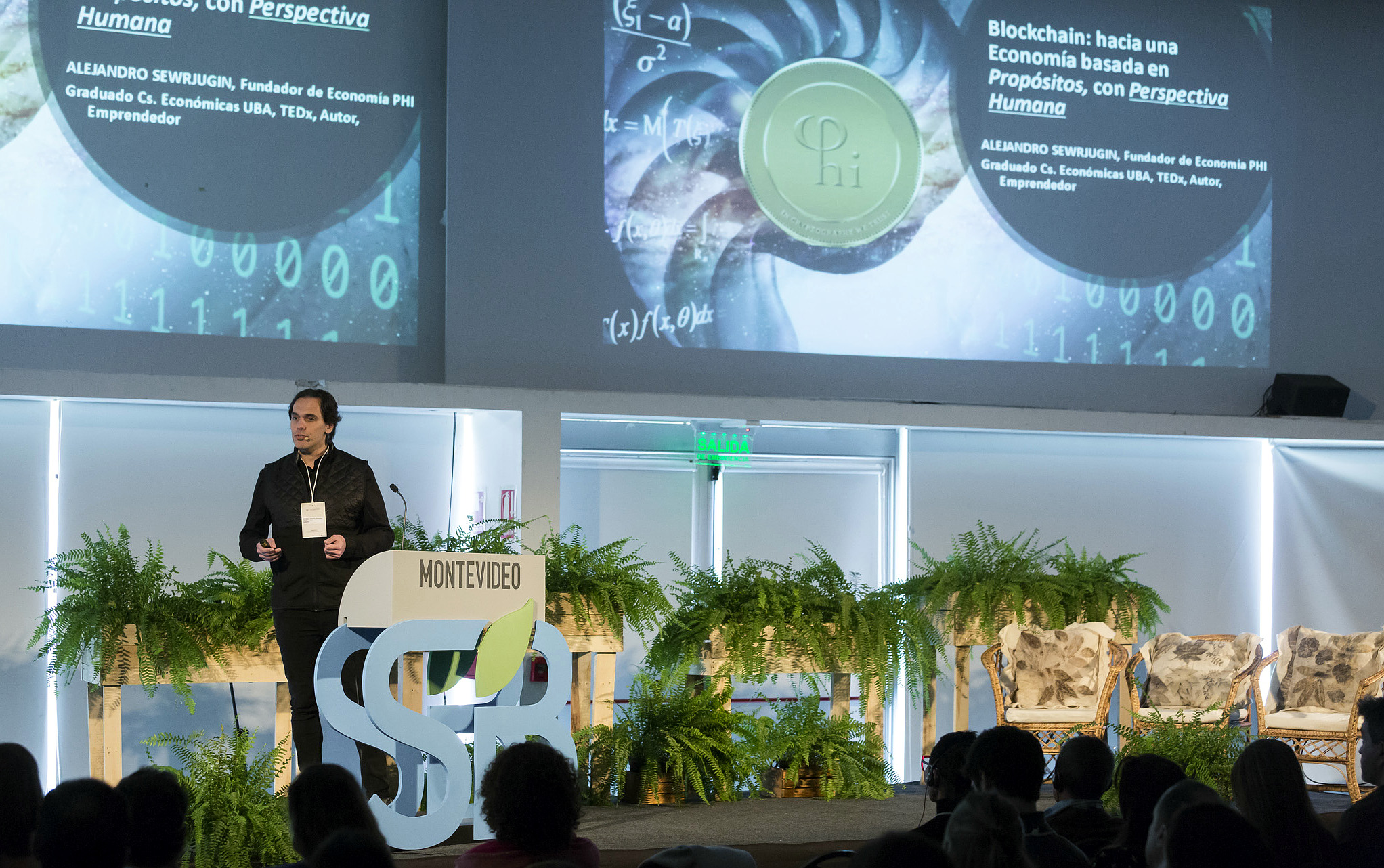 Alejandro Sewrjugin discusses "Blockchain: toward an economy based on purpose, with a human perspective"

Speaking of future economies, cryptoeconomist Alejandro Sewrjugin is founder of PHIEconomy — an organization bringing together technology and economics to create a cryptoeconomic new theory of value — argued that through use of new currencies such as blockchain, we can create an economy of purpose from a human perspective

He used Julia Roberts’ commanding turn as Mother Nature in Conservation International’s “Nature Is Speaking” series to remind us that “we need to leave our egos behind and stop taking things for granted, reconsider why we do what we do every day.”

What happens if we go from a resource-based economy to a people-based economy, one governed by empathy? We need to incorporate human technology

We need to radically transform our notion of value to redefine our economic system (as Einstein said: we can’t solve problems with the same thinking that created them) — the SDGs are a good guide, Sewrjugin said.

We all chase money, Sewrjugin said, but we’ve never questioned its value — we just trust the issuers (government). Blockchain, on the other hand, is a public, decentralized system — a secure, traceable, person-to-person exchange with no intermediaries. Its purpose was to create a system to connect people outside the banking system — the first real, human-backed currency.

He pointed to a host of alternative currencies that have emerged — including SolarCoin, CureCoin, the Royal Bank’s Learning Coin, VeganCoin, FoodCoin and the LGBT Token — eschewing mainstream financial institutions in the name of addressing different human issues.

Towards the end of the day, Maria Laura Tinelli — director at impact investment firm Acrux Partners — turned the topic once again to new economic models, and how impact investment is co-creating a new version of capitalism.

Everyone always remembers Adam Smith talking about the ‘invisible hand of the market’ in The Wealth of Nations, she said, but that concept was mentioned once; he also says a system can’t grow if there is an imbalance of elements, in which one part of the system harms another. In other words, a merely economic view is of no use.

Fortunately, more than 2,400 institutional investors around the world have adopted ESG issues into their analysis — the GIIN estimates $502 billion in investment opportunities, and that’s growing 17 percent per year.

Rather than The Wealth of Nations, Tinelli suggests that Smith’s The Theory of Moral Sentiments — which investigates the flip side of economic self-interest: the interest of the greater good — be required reading. 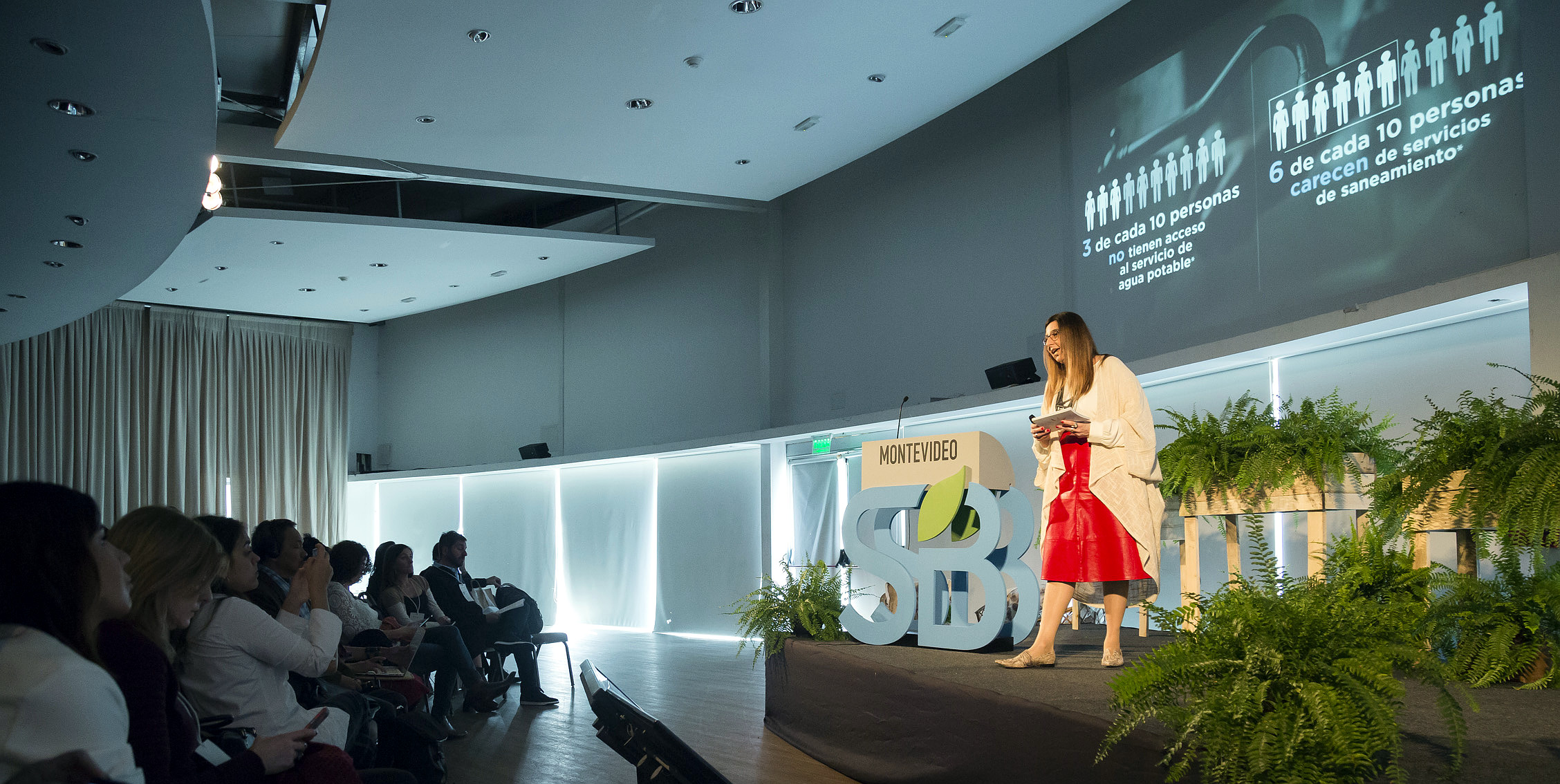 Soledad Izquierdo — VP of Public Policy, Communications and Sustainability; South Latin Business Unit at Coca-Cola — shared how the soda behemoth has redesigned itself as a comprehensive beverage company, and its progress to date on the three pillars of its sustainability work:

Then, Karen Vizental — VP of Sustainable Business and Communications for Latin America and Southern Cone at Unilever — discussed how purpose-driven brands grow, from one of the companies that probably knows best: For the past few years, Unilever’s growing stable of “Sustainable Living Brands” has been demonstrating the business case for embedding sustainability into brand propositions. Unilever’s now 28 Sustainable Living Brands, which include 7 of the company’s top 10 brands, continually outperform the rest; in 2018, they grew 69 percent faster than the rest of the business, compared to 46 percent in 2017;

As new CEO Alan Jope has been quoted as saying: “It is not about putting purpose ahead of profits; it is purpose that drives profits.”

How to communicate ‘better,’ better 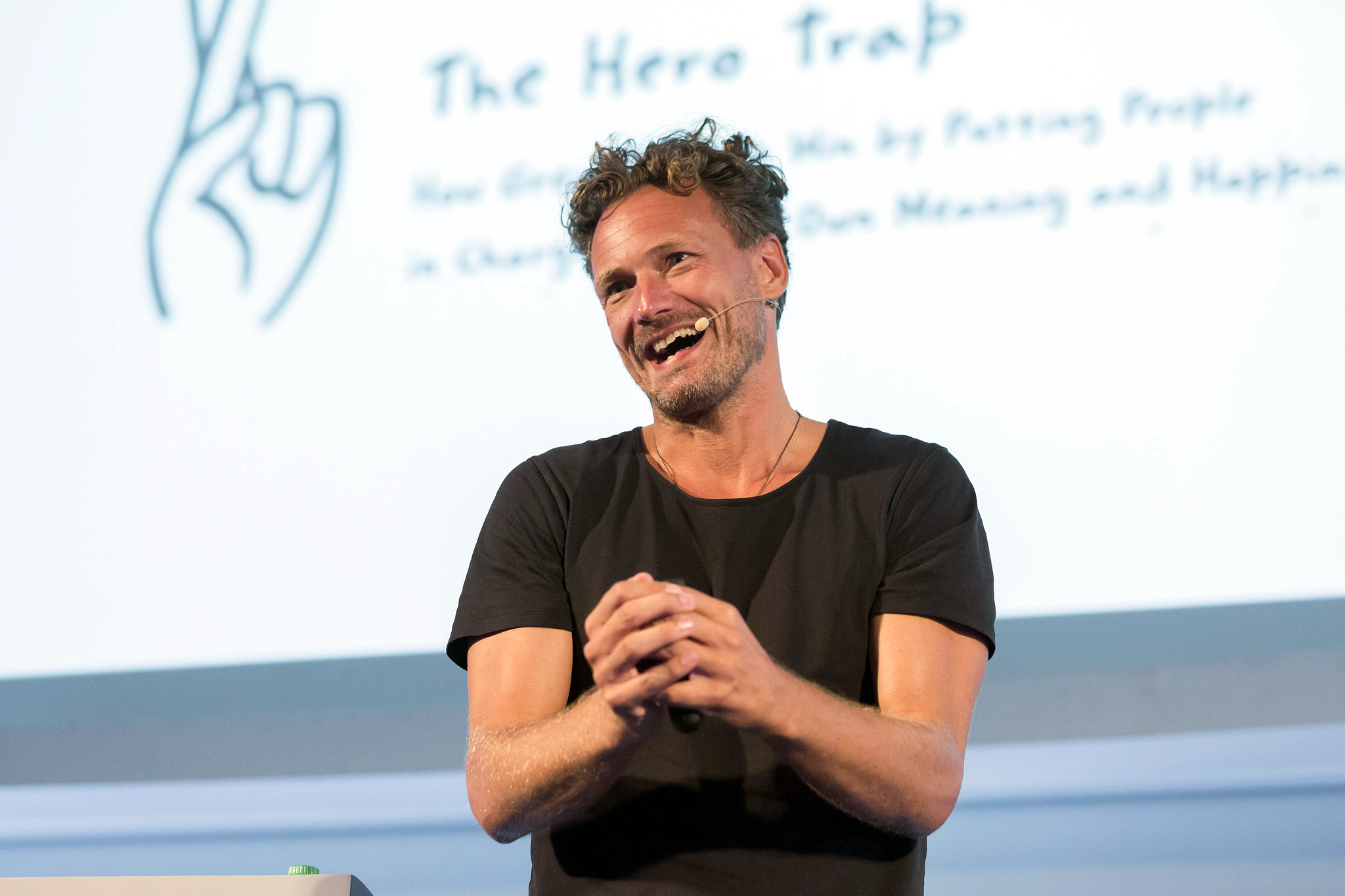 Goodvertising guru Thomas Kolster acknowledged that, while many brands are doing better — in terms of using their power for good and communicating about it — many are now also falling into what he calls The Hero Trap (the subject of his new book, coming out at the end of the year), in which advertisers still focus their messaging on how well they’re doing vs focusing on the consumer and what the brand can change for them. As Kolster asserted, no brand is greater than what it can make people achieve (mic drop).

Brands no longer have the power; people do, he said. 43 percent of young people today believe individuals, rather than companies, will be most effective at solving today’s social and environmental challenges. And while that may be true, there’s still a huge gap between intention and action: 65 percent of people say they want to buy better products, but only 26 percent do. So, why rely on companies to make everything better, when we’re not following through? We need to focus on changing ourselves and our own behavior — we don’t have to start out perfect, just continually improving.

Which goes back to brands: Kolster no longer believes in brand ‘purpose’ — he believes in transformative promises. He now asks brands four questions:

He used a South African healthcare company with a program called Vitality, which incentivizes people to live healthier lives, as an example of a company that’s delivering on its transformative brand promise — and challenges more brands to start thinking in this way. 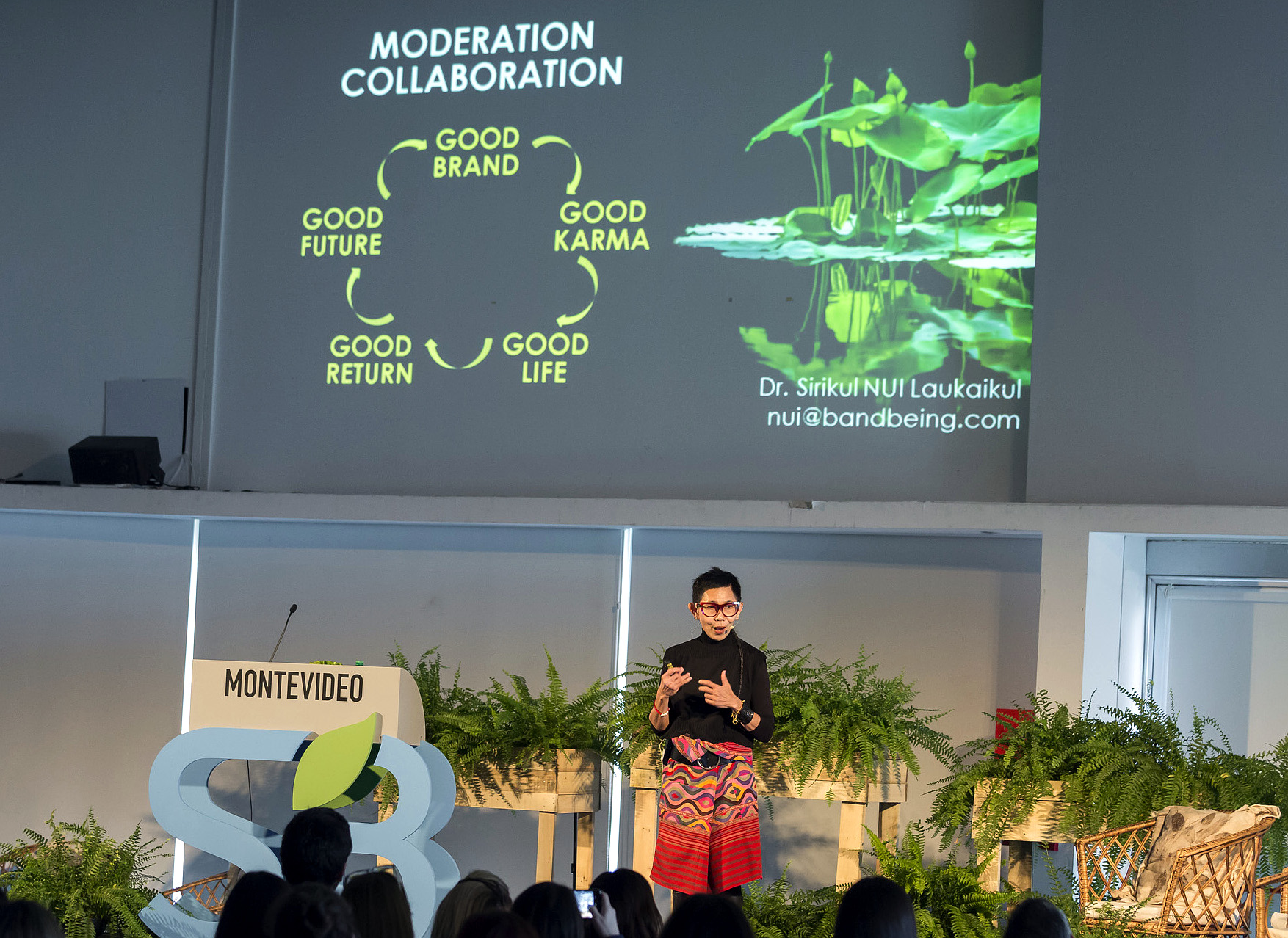 Later, Dr. Sirikul “Nui” Laukaikul, also known as The Brandbeing Consultant, introduced the Uruguayan audience to the concepts of a sufficiency economy and “karma marketing,” which incorporates Buddhist principles into brand strategy and messaging.

As Nui pointed out, to live a Good Life isn’t easy — but to deliver the Good Life is even harder. Her definition of a “sustainable brand” involves the act of knowing yourself/your brand, understanding your values and learning to deliver it to others.

Karma = action. The Law of karma states that whatever one sows, one reaps. Good/bad karma leads to good/bad living — that is the law of consequence.

Where she characterizes conventional marketing as fundamentally manipulative, taking advantage of ignorance; karma marketing — or mindful/responsible marketing, where what you’re marketing creates some benefit for society — is an attempt to flip that and use marketing to create positive impacts.

She advised brands to start by appealing to consumers’ selfish needs to gain attention, then expose them to the true value of your brand/others/nature — first, understand their desires and then awaken them to reality.

We need to change our KPIs from ‘more’ to ‘moderation’ or balance, known in Buddhism as the ‘middle path.’ In a perfect world, brands would aim to deliver contentment — being happy with what you have.

Where 'purpose' is (or should be) headed 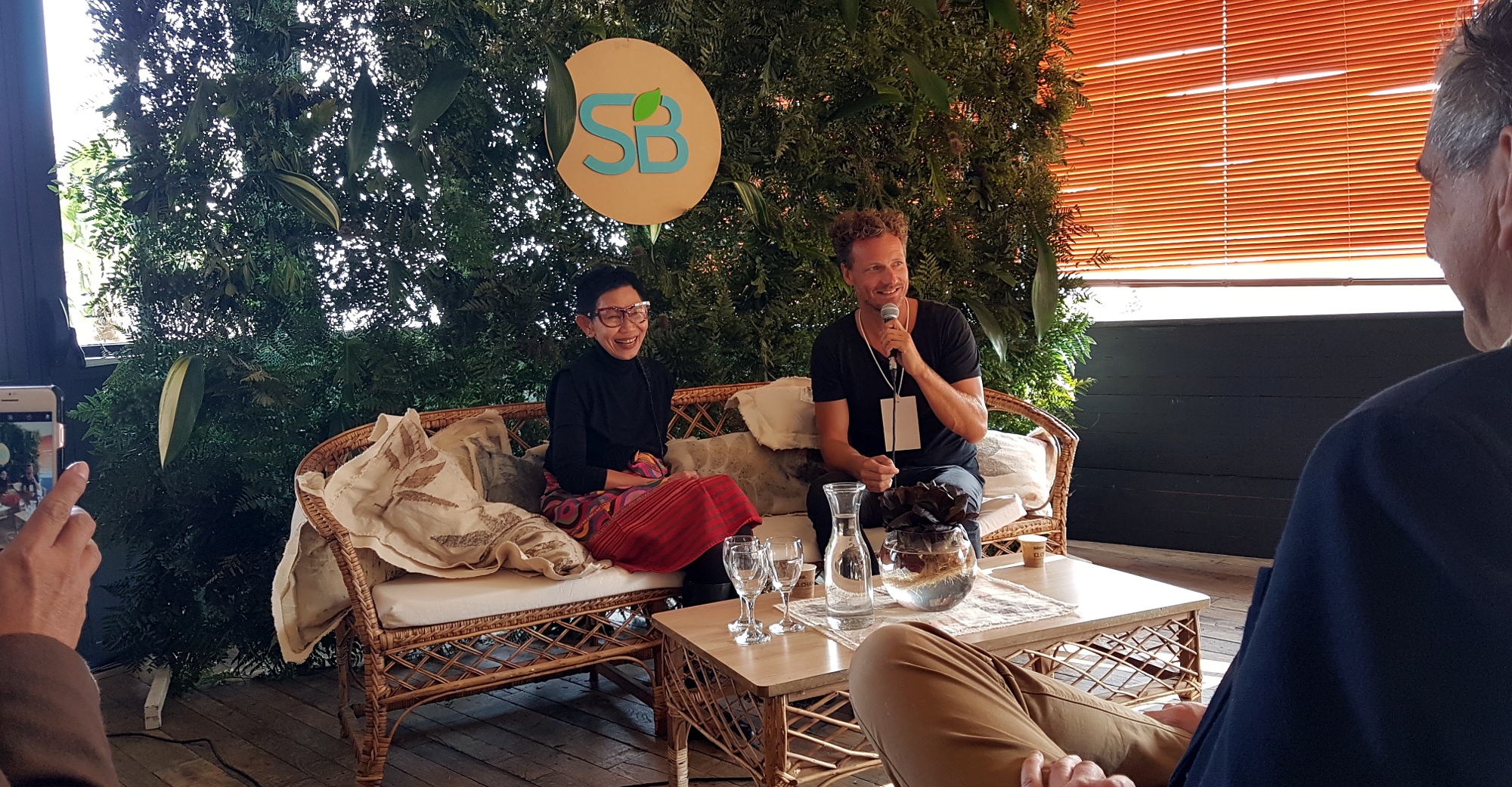 Later that afternoon, Nui and Thomas Kolster sat down for a “living room” chat (imagine your living room booked to capacity) about purpose and where it is (or should be) headed.

As Nui pointed out, purpose is why you exist. We don’t exist to make profit, we exist to help others — a principle rooted in Buddhism and any other philosophy you can think of. Purpose is a compass, she said — it will lead you to passion, to a destination. Purpose and passion are both critical for life — for people and for brands.

The whole point of life, she says, is to live a Good Life. It goes back to the sufficiency economy philosophy — based on moderation (you can have luxury, drink wine, etc; just in moderation), which should be a parameter for aspirations for a Good Life.

Whereas achieving profit makes you feel successful, helping people makes you feel valuable; if you work without a shared purpose, there’s no real impact.

Kolster, on the other hand, said where brands are concerned, “purpose” is a word that’s become too big for its own good. He says companies should find ways to make meaningful connections with their customers, rather than focus on finding/espousing their ‘purpose.’

They both agreed that it’s not enough to create a campaign — brands need to follow through and see the impacts/change made from their sustainability/purpose initiatives. And the human element must be the focus of all brand efforts going forward, including breaking down complex sustainability speak into simpler, more relatable terms.

Nui said in closing: “To deliver the Good Life, don’t just do it for the brand; but use the brand to empower others.”