Across Europe, activists demanding more action on issues that matter have taken over the narrative. Tapping into business innovation to help change the world for the better is now firmly accepted as a crucial part of the puzzle. As speakers highlighted this theme in various ways throughout the day, three key lessons rose to the fore.

Sustainable Brands ‘19 Paris could not have opened at a more apposite moment. Across Europe, activists demanding more action on issues that matter have taken over the narrative. From the gilets jaunes movement in the French capital, calling for more just tax reforms for the working classes; to London’s student-led protests from Extinction Rebellion, urging governments to do more to reverse global warming — the expectation for those in power to take action has reached a fever pitch.

Of course, at the heart of current conversations is the business community. But that wasn’t the case 15 years ago, when Sustainable Brands first launched.

“We started with a vision, a desire to change the narrative common in the world today — that business was the enemy, and that governments and NGOs were going to save us,” founder KoAnn Vikoren Skrzyniarz said in her opening address to the gathered delegates inside the impressive Carrousel du Louvre event centre, beneath the famous museum.

Instead, tapping into business innovation to help change the world for the better is now firmly accepted as a crucial part of the puzzle. As speakers highlighted this theme in various ways throughout the day, three key lessons rose to the fore.

In era of rampant activism, brands must be bold — or die

The first plenary session of the three-day event heard from two of the businesses leading such a charge: food giant Danone and carpet-tile manufacturer Interface.

Both say there is a real need to be bold and brave in not only setting ambitious goals to reduce impacts, such as emissions and resource use, but in promising to go further in pursuing a purpose rather than merely chasing profits. 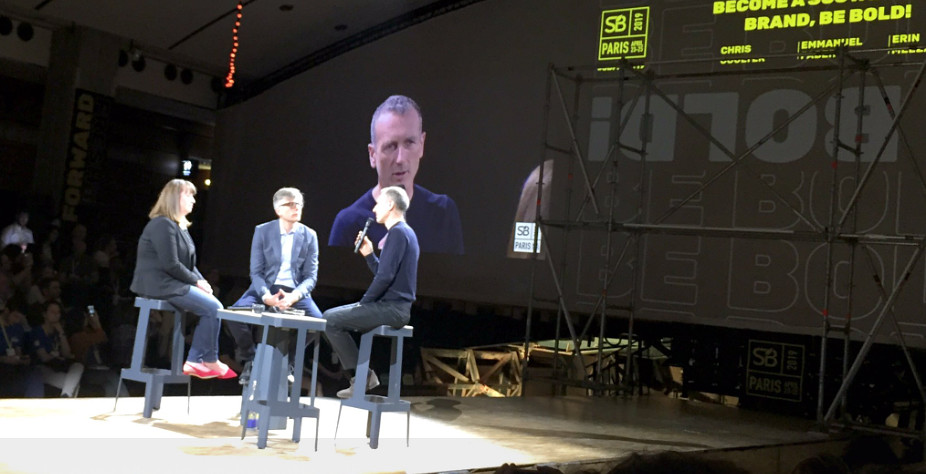 “If we are not bold, we face the risk of being meaningless, and dead as businesses,” said Danone CEO Emmanuel Faber. Excited by the fact more and more companies are using the UN Sustainable Development Goals (SDGs) to find something to make their work more useful, he also pointed to the need for brand activism.

“Gilets jaunes is a brand, as is Extinction Rebellion,” he added. More than corporates taking action, Faber wants to see brands created out of ideas, developing focal points for action and making sure the people behind the brands come to the fore to serve a purpose.

But with so many sustainability issues to be tackle, what action to take? Well, there are 17 SDGs; pick whichever you want, Faber said. But it’s not necessarily about the size of the goal being set, more about the consistency applied by a brand to achieving it: “It’s about changing how we do things, and then being consistent.”

It’s also about admitting that nobody is perfect – something big companies, including Danone, hate to do, he added.

Bold leadership is the reason that most people put their hands up when asked by session moderator Chris Coulter from GlobeScan whether they know of Interface — a relatively small manufacturing business based in the US.

“Our founder, Ray Anderson, set out to transform the business and cut our carbon footprint by 70 percent to help protect the environment,” said Erin Meezan, the company’s VP and Chief Sustainability Officer.

The decision to turn the business around, she reminds us, was prompted by a customer conversation. A missed opportunity to sell carpet tiles to one of California’s newest green-building projects, forced Anderson to ask different questions of himself and his team — to change the company mindset.

Twenty-five years since Anderson’s Mission Zero strategy was implemented, the passing of the company’s founder and the introduction of a new CEO presented an opportunity to renew the mission and go even further, Meezan said: “We knew we needed to raise the bar — to go from being a company doing less bad, to one that created a positive impact in the world.”

Now, Interface is on a mission to reverse global warming — words chosen “by design” to align the business with a problem that clearly needs solving, and getting the company away from incremental shifts of environmental impact reduction.

It doesn’t get much bolder than that. Sustainable Brands Paris is off to a flyer.

In solving our planet’s biggest problems, ignore the city at your peril

Half of the world’s people live in a city. Around 70 percent of the planet’s greenhouse emissions come from cities. In many ways, the city is where many of our environmental and social problems exist.

But it is also where many of the sustainable solutions will be created. This makes the city the ultimate playground for brands to engage with citizens and consumers on issues that matter most to them.

It is in this context that SB’19 Paris’ first New Spaces session kicked off, exploring how the city can be transformed so that brands can better be creative in talking to, and encouraging action from, the people that live, work and play there.

Jean-Louis Missika, Deputy Mayor of Paris, acknowledged a more pointed appetite for action on climate change, something that is happening in all cities.

“Pollution, social discrimination, segregation, migrants — all of these problems are related in some way to the climate crisis,” he said.

In the French capital, the local authority has worked hard to democratise the government response to environmental issues. It asks Parisians to propose sustainable projects for the city — to design them, to vote on which should take priority, and to then implement them. “It’s participatory democracy, sharing decisions to do things,” he added, pointing to the overwhelming number of votes from citizens for the Mayor’s office to support greening the city as a “good clue as to what’s important for the city”.

But there is a real role for businesses to step up in support of local projects. Elisabeth Laville, founder of Utopies — an organisation that has been looking at city trends for 25 years — says there is an increased expectation for brands to get involved in cities, not only to minimise their negative impacts, but also to make a positive contribution.

She also explored how brands are adopting localised business models and marketing. If a company’s purpose is to create jobs in a particular city, that’s what they should do — rather than expanding their brands to neighbouring cities, merely to offer the same products and services. Detroit-based Shinola employs more than 600 people in the city. It started by making watches; now it makes bicycles and has even opened a hotel — all with the sole purpose of creating jobs in “America’s Comeback City.”

The session also heard from Devita Davison from FoodLab Detroit, a non-profit that supports entrepreneurs in getting their food businesses to scale — in a city that went from being the US’ fourth richest, to filing for the largest municipal bankruptcy in history in a span of 50 years.

“We must pay attention to our cities,” she warned before proudly explaining the FoodLab story. Borne out of necessity — the people of Detroit had been devastated by poor access to good, healthy food, with some communities going 30 years without a local sit-down restaurant — FoodLab is a growing community of local businesses being run by people that had faced food challenges in the first place. “We had to do something to build healthy communities,” Davison added. “Our administration was focused on the police and safety, not sustainability, small business or entrepreneurs. Things have changed now, though.”

Preoccupied with thoughts of the Olympic Games, coming to Paris in 2024, Missika said that brands will need to be challenged on sustainability if they want to be involved.

With a nod to Davison’s Detroit history lesson, Missika warned: “Just because a city is in a good shape, that doesn’t mean it will last forever.”

The adage, “Be the change you want to see in the world,” got a wellbeing update today with the advice to ‘be happy while being that change.’

The ‘Feel Good’ sessions on Tuesday afternoon focused on happiness, highlighting the need for a personal reason to engage, finding happiness at work, and how to make consumers feel good for doing good. At one point, the audience was plunged into darkness, while being exhorted not to be afraid of happiness (or the dark).

When considering the power of storytelling, the question arose: To what extent are young people (Millennials and Gen Z influenced by brands, and how much do brands need to reflect youth culture?

Specifically, is there any role for sustainability in the storytelling in computer games? Xavier Guilbert, Senior Creative Partner at Ubisoft — creators of the popular “Assassin’s Creed” series of games — spoke of the opportunity and responsibility of recreating a living world.

“The fact that technology is now ever present is both a challenge and an opportunity,” he said. “Our mission statement is to enrich our players’ lives. We do this by giving out a view of the world.”

While he was quick to assert that it is not the role of computer games to educate, he recognised the responsibility to present an accurate view of the world.

“We are recreating worlds that are inspired by the real world — we have to ‘go smell the grass.’ For example, we sent a team from Quebec to Greece in Spring. They saw this lush land with butterflies and flowers, which was not at all the image of dry land they expected. That’s the kind of thing you don’t get from Google maps.”

How influential can storytelling be in creating real change? Suggestions were made that the youth climate strikes in the UK reflected a generation weaned on Harry Potter and young heroes overturning power.

However, the influence is not all one way. Stephen Greene, co–founder and CEO at Rockcorps, noted: “It’s important to understand there is a behaviour change that we have to follow; we don’t lead it.”

So, what are the behavioural characteristics of younger people that brands should tap into? Lucie Beudet, co-founder of Konbini — a multi-format media company producing a mix of culture, art and news content, aimed at younger users — noted the immediacy required by a younger audience: “What I like the most is the now, compared to the 2020, or 2025 targets. There would be a huge disappointment if we are not able to give them an answer now. They can’t wait. For them, everything is direct, live and spontaneous.”

Echoing previous calls to be transparent in storytelling, Lucie’s final advice to brands was “Don’t fake it. Do it soon.”