Organizational Change
In Era of Employee Activism, Is It Time to Give Your Staff Full Control?

Tom Idle
Published 3 years ago. About a 5 minute read.
Image: Guy Singh-Watson (center) and his family of employee-owners. | Riverford/Facebook

After a year as an employee-owned company, a “new sense of pride and unity” across the business has resulted in a 10% sales uplift for Riverford, and the best sales year recorded in its 30-year history.

The mass employee walkout at the online furniture firm Wayfair last month is a sign of the times. The company’s decision to fulfil a large order of furniture headed for the contentious detention centres along the US-Mexico border sparked a huge social activist movement — not from within the campaigner movement, but among ordinary people, increasingly intolerant of what they see as poor corporate practice.

Of course, disgruntlements over exec decisions among staff are nothing new. Most corporate away-days, water cooler chats and after-work drinks are fuelled by missives aimed at the top of the hierarchy. Conversations about lazy colleagues, unpaid overtime and unfair dismissals are commonplace.

What makes the Wayfair case, and others that have gone before, so significant is the increasing appetite for employees to make sure their voice is heard when it comes to their employers’ stance on wider social, environmental — and in this case, political — issues, using technology to drive action at speed and scale.

According to research by PR firm Weber Shandwick, 38 percent of American workers have spoken out in either support or criticism of their employer’s actions on issues such as climate change, same-sex marriage, gender equality and pay equity. And the large majority (80 percent) of Millennials believe they have the right to be vocal on such issues, even if it means calling out their employer.

But what happens when a company actively gives employers a voice? Further still, what about when the workers are given control and a real say in how a company operates, acts and performs?

Employee-owned (EO) businesses — where staff are given a stake in the company, whether as a percentage of the profits or in the form of shares — are on the rise, at least in Britain. Today, there are 370 employee-owned firms in Britain, with 60 percent of those registering as such since 2014. In 2018, the number of EO firms increased by almost 20 percent.

And they are performing well: The Top 50 EO companies in Britain posted combined sales of £19.2 billion (US$23.3 billion) last year, up 3.5 percent on a like-for-like basis, compared to the previous year. Meanwhile, operating profits jumped 2.5 percent and productivity almost 8 percent.

“Shareholders have no idea what’s happening on the shop floor. So, those creating the value should benefit from that value,” says David Sproxton, co-founder of probably one of the most famous EO companies in the UK, Aardman. He says that the Bristol-based animation studio, creator of the Wallace & Gromit films, has always had a collaborative culture: “The employee ownership model fits well with that.”

Audio and TV retailer Richer Sounds is another company that has handed control over to its staff, by placing 60 percent of the company into an Employee Ownership Trust (EOT).

“To me, the decision to sell the company to my colleagues was an obvious one. Nobody knew my business better than the people in it and we’d created a culture together,” said founder Julian Richer. “To sell to the highest bidder would have created wealth for one or two people. Instead, using the EOT model, we will sustain the value we create for the individual, the business and the economy for the longer term.”

It is an ethos shared by Guy Singh-Watson, founder of the Devon-based, organic veg-box subscription business, Riverford.

“The whole exit strategy, adopted by so many tech firms, makes me angry,” he told Sustainable Brands in a recent interview. “People want to make something of value, but their whole reason for doing so is to create shareholder value, so that they can sell it to Facebook or Amazon before it crashes.” 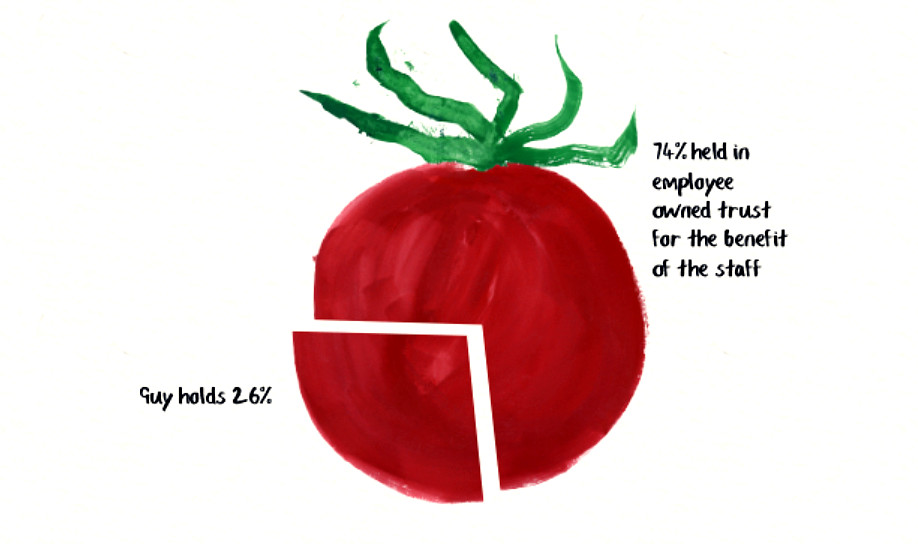 Singh-Watson’s decision to sell the business to his staff in 2018 took a long time. He examined the market to see what models worked before agreeing to the current model, which sees all staff sharing in the spoils of 10 percent of profits each year and having a say in all executive decisions. Among companies moving into employee ownership, Riverford was unusual in selling such a high initial percentage (74 percent, with Singh-Watson retaining 26 percent) and at less than a quarter of its market value. The aim is to double the profit share to co-owners, to 20 percent.

One year in, and MD Rob Haward claims that a “new sense of pride and unity” across the business has resulted in a 10 percent sales uplift and the best sales year ever recorded in its 30-year history: “Motivation, ideas and a sense of ownership are impacting everything, from productivity, to financial performance.” he says.

And staff turnover has reduced by 15 percent in the last year, thanks to new initiatives such as a staff council — which consults on issues such as co-owner wellbeing, culture and pay.

“It’s not a coincidence that we’ve broken all targets for this year. It is down to people feeling a sense of ownership and rallying around to make improvements in every area, no matter how small,” says HR director Charlotte Tickle.

While the EO model appears to be stalling in the US, with just over 6,000 employee-owned firms registered, there is plenty of evidence to suggest giving staff more power, not less, is a successful corporate strategy.

At Aardman, Sproxton says its EO model, which is less than a year old, has already helped to legitimise its approach to environmental stewardship and diversity. At engineering consultancy Mott MacDonald, EO “stimulates collaborative behaviours — so when we make decisions, we get real buy-in and ideas are easier to implement.” Other UK case studies point to enhanced productivity, ultimate transparency and giving people a voice in corporate governance.

“Founder-entrepreneurs who sell their businesses to the highest bidder are typically smug to start with but, as the new owners destroy their creation, they suffer an identity crisis, ending up rich but bitter,” Singh-Watson added. “By contrast, over our first year of employee ownership I have grown happier every day, watching Riverford grow by doing things better, with integrity, while generating profit, and — on a good day — with joy. I have no regrets; only pride in what we are achieving together.”

CHEMISTRY, MATERIALS & PACKAGING
6 Principles for Building a Pathway to Circularity for Plastics