John Hanselman
Published 10 months ago. About a 8 minute read.
Image: cottonbro/Pexels
Sponsored Content / This article is sponsored by Vanguard Renewables.

As we celebrate Women’s History Month, it seems only fitting to focus on the women working to feed our country. From raising dairy and beef cows to vegetables and other crops — women are slowly becoming the face of the next generation of US farmers.

Those numbers are surprisingly low; but since 1982 female-led farms have tripled in the US. Around the globe, the number can be as high as 50 percent in some countries.

As we celebrate Women’s History Month, it seems only fitting to focus on the women working to feed America. Farming is not an easy job. According to Danielle Goodrich-Gingras, Dairy Herd Manager for Goodrich Dairy Farm in Salisbury, VT: “It’s not a job; it’s a way of life.”

From raising dairy cows or raising cattle for beef to raising vegetables and other crops like hemp — women are slowly becoming the face of the next generation of US farmers. 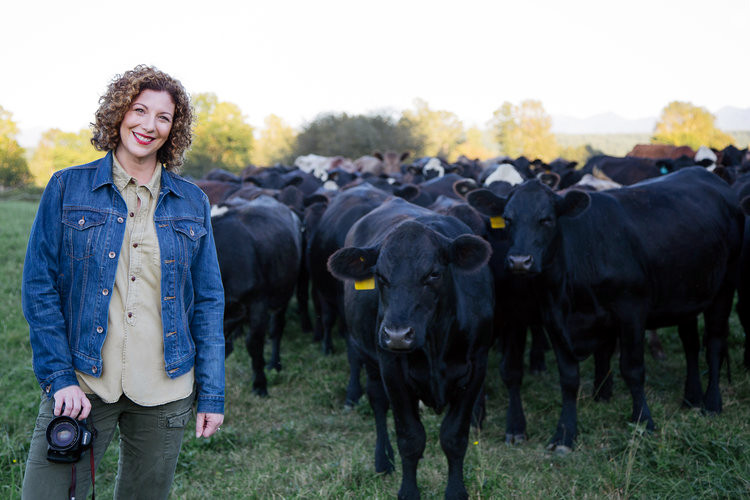 According to Audra Mulkern, founder of The Female Farmer Project, the USDA didn’t begin tracking gender in its farm census until 1978.

“There really is no good data on women in farming in the United States; we only started to see women appearing in the farm census count in 1982,” Mulkern says. “Yet, the census was asking the wrong questions. They were only asking for the primary farmer; and on most farms, it was the husband that was counted. That didn’t change until 2018, when they began to allow for the inclusion of four names to be listed. So, there isn’t any legacy data to compare; and that has made it harder for us to track the rise or fall of women in farming in the US.”

Mulkern has spoken extensively about the lack of inclusion of women in farming statistics. She often highlights forgotten women of our past — such as the Woman’s Land Army of America, who were dubbed the “Farmerettes.” These were the women who served our nation during the first and second World Wars by taking over the farming while men fought battles around the globe.

Anna Baldwin, who revolutionized the dairy industry, is largely unknown. She invented the first suction milking machine — the Hygienic Glove Milker — which was patented in 1879. Between 1860 and 1880, Baldwin filed five patents — including a device to treat milk to create butter, amongst others.

Yet, these stories of women farming our nations’ lands have long been forgotten.

The Female Farmer Project is working to tell those stories — both of those who came before and of those women who are now leading the way in all areas of agriculture. Whether it be in the field, in the milking parlor, or running the family farm stand — women are the ones feeding our nation.

Mulkern, a retired Microsoft executive, knows something about breaking through the “glass ceiling” in industry. Still, when it comes to farming, she believes that women farmers face a different ceiling — the “grass ceiling” — and she calls on us all to “mow that ceiling down.” 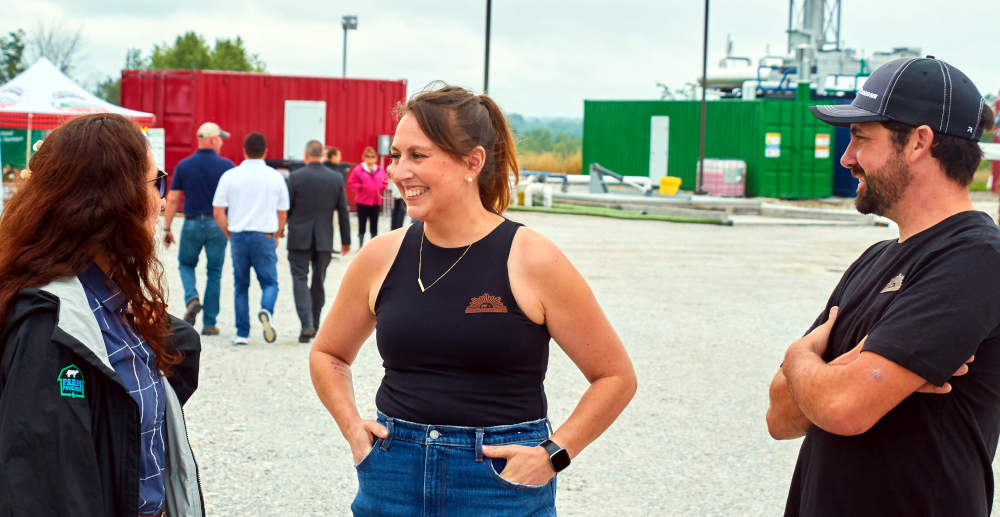 The stories of women such as Anna Baldwin and the Farmerettes have paved the way for today’s women in agriculture — including Danielle Goodrich-Gingras and Denise Barstow Manz — both integral parts of their generational family farms.

Goodrich-Gingras is a third-generation farmer at Goodrich Dairy Farm. Growing up on her family farm, it was expected that she would follow in the footsteps of her brothers and go off to boarding school, then college; and then find a career that was vastly different from dairy farming.

“I was scared to tell my family I wanted to be a farmer,” she said. “It was expected I would go off to school for business or some other field. When I told my dad my path would be different, they were shocked. I always worked on the farm, loved animals, and loved the work; yet they were still surprised.”

It was Goodrich’s grandfather that needed the most convincing, she says: “He was from a different generation, and I was the baby of the family. He wasn’t convinced that I could handle the work. So, when I came back from college, I wasn’t thrown into management; I was thrown into the barns and the thick of it. Once he saw me doing the milking, caring for the herd, and giving it all I got — he realized that this wasn’t just a job for me, but it was a lifestyle.”

Barstow Manz’s story is different from Danielle’s but no less important. She is a seventh-generation family farmer who runs Barstow’s Dairy Store and Bakery at the family’s Longview Farm with her two cousins, Shannon and Kelly; and Kelly’s partner, Jean.

“I wouldn’t consider myself a ‘farmer;’ nor would any of us who work in the farm stand,” Denise says. “We have amazing women who do work on our family farm as farmhands; but at some point or another, we all pitch in if needed.”

The Barstows have been farming their land for over 200 years and keep 450 acres of Massachusetts farmland open.

“This is important for climate resilience, food security, groundwater, and for the region's wildlife habitat,” Denise says. “It’s why I wanted to come back to be part of that story and continue the legacy of the land and of food security in our state.”

Denise, Shannon, Kelly and Jean agree that community is the driving force behind all they do. Being part of a family business that is embedded in the community is one of the most important aspects of their family farm and its farm stand. It’s why each is more committed than ever to working to keep their family farm viable for future generations. 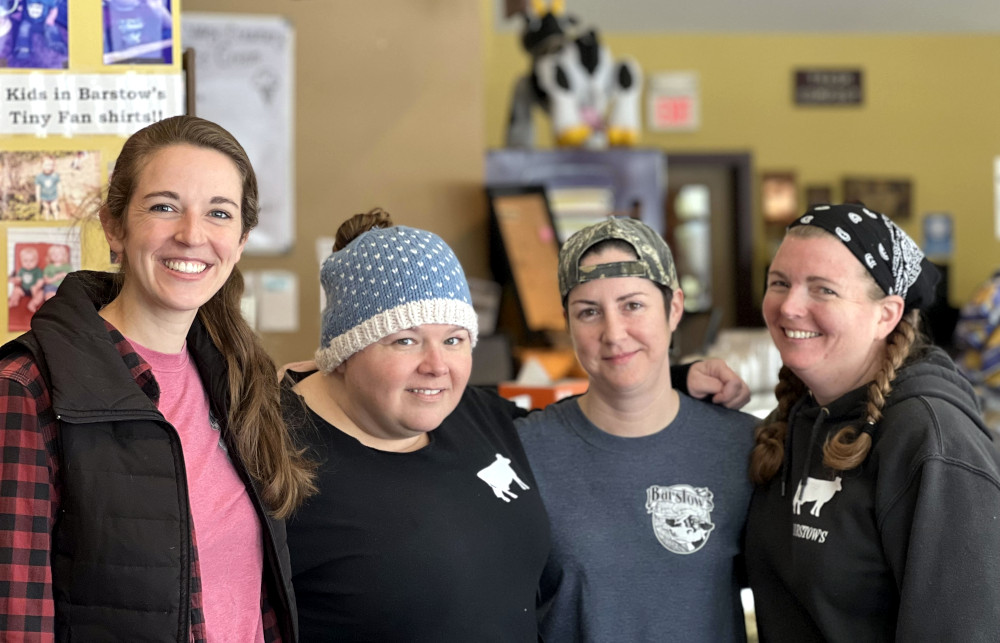 In the United States, many people conjure an image when they think of farming: a man wearing overalls and working the land or in the barn. However, that is not what farming looks like today. There are still hurdles that women face every day and ceilings that need to be mowed for women in farming.

“The biggest challenge facing women farmers today is access — access to capital, to land, and equipment,” Mulkern says. “Many female farmers don’t own the land they are farming, and they don’t want to make capital improvements on land they don’t own. They think about portable washing stations, hoop houses and processing facilities. Women farmers need greater access to capital, and it’s why the USDA is beginning to think about funding its programs differently. They are making investments in female and other disadvantaged farmers; it’s just not at the pace that we need for our female farmers to succeed.”

Goodrich-Gingras says one of the biggest challenges is being seen as an equal, outside of her family business: “I still have people that show up in my office and ask to speak to the boss and assume that person is not me. In the past, I have had to fight to be taken seriously, and sometimes I still struggle with that. I’m blessed that my family supports me 100%. Danielle runs the herd, nobody else; and my family isn’t scared to tell people that.”

For Barstow, it’s about carrying on the family legacy. She says: “The reason we are showing up to work is not to make lots of money. We could all have better-paying jobs in another industry, but it’s not about that for us. It’s about ensuring our family legacy and taking care of our community. We are dedicated to keeping our farm vital and the center of our community for generations to come.”

Advice for the next generation of female farmers

Women are becoming the face of farming around the globe; and if you go to any farmer’s market around the US, the faces you see behind the fresh produce, the meats, and other products are women’s.

Mulkern wants female farmers to go for it and tell their stories: “The number-one product women farmers have is their story. That story is beautiful and makes for a beautiful life. You get to wake up every day and be outside and feed your community. That’s a wonderful life; go for it.”

“It’s not a job; it’s a lifestyle. Be fully committed and be yourself — don’t forget who you are and never question how hard you’re working. It’s a wonderful industry to be a part of; and I would encourage any young woman to intern or take a summer job on a farm to see if it is truly their passion,” Goodrich-Gingras says.

Finally, the Barstows all say don’t forget about your community. “Community is everything to us, and we wouldn’t be here today without our Hadley neighbors. We support each other and are invested in making sure that we lend a hand when needed; and that’s returned tenfold,” Denise said.

Farming is changing; and as women take their place on the tractor, in the milking parlor, in the dairy bar, or in leadership roles in the agriculture industry, it’s their “her-story” in the making.