Waste Not
ReGrained Rebrands, Invites Us All to ‘Eat Up!’


Published 3 years ago. About a 2 minute read.
Image: Regrained

ReGrained — which has made a name for itself with nutrient-dense granola bars made from spent brewery grains — has announced a new brand aesthetic, complete with a consumer call to action.

San Francisco-based startup ReGrained — a mission-driven, upcycled ingredient platform and a finalist in SB’s 2016 Innovation Open — says it created fun, bright, whimsical, character-driven packaging to more closely reflect its internal culture and active, intentional consumer base, creating a unique identity for every flavor. The new brand imagery supports ReGrained's mission to better align the food we eat with the planet we love. 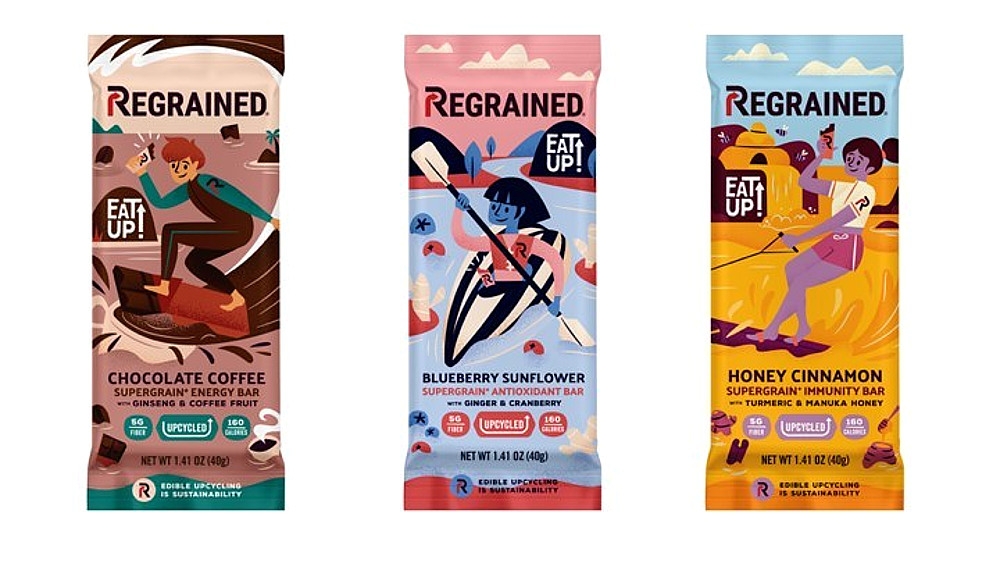 The new branding, which will launch later this week, also represents the company's official debut as a platform for upcycled food innovation. The brand's hero offering, ReGrained SuperGrain+™ is a versatile ingredient that performs flawlessly in all commercial applications from savory to sweet, producing a range of delicious, nutritious foods. In addition to its signature SuperGrain+ Bars — re-released in slightly rebooted flavors: Honey Cinnamon Immunity, Chocolate Coffee Energy and Blueberry Sunflower Antioxidant — the company also has many co-branded "Powered by ReGrained" products with other food companies in the works.

ReGrained's new brand identity has incorporated a call to action: "Eat Up!", which carries several layers of meaning.

As CEO and co-founder Daniel Kurzrock explained via email: “’Eat Up!’ is the evolution of our original ‘Eat Beer.’ tag. While ‘Eat Beer.’ caught people’s attention, ‘Eat Up!’ is a simple call to action with at least three layers of meaning: 1) Eat Upcycled. 2) The food is so tasty, you can’t help but eat up and finish your food. And finally, 3) The food is nutritious, so eat up for your health.”

ReGrained was the first snack company to market with compostable, plant-based packaging, which it used for years. Unfortunately, as is the case with many new technologies, version 1.0 failed in the field, resulting in stale bars. While the company is hard at work is on the development of version 2.0, its bars are temporarily packaged in conventional film — ReGrained’s goal is to be back in a fully certified, compostable package within one year that it will open-source, so it can be available to and widely adopted by the industry. Kurzrock says there's also a need to educate consumers on all aspects of compostable packaging.

"I believe we need to shift the conversation to include more consideration for upstream inputs (i.e. compostable = plant-derived) and not just downstream (landfill, recycling, compost). Lots of confusion abounds about this stuff," he said.

In the meantime, Eat Up! SuperGrain+ bars can be found at thousands of retailers nationwide, including Whole Foods, Sprouts, Lucky SaveMart, Nugget Market, Fresh Thyme, and many more.