The Next Economy
Learning from Leadership:
How to Create a Climate-Positive, Post-Pandemic Future

Embracing serendipity, climate positivity and wisdom from the natural world are just a few pertinent principles from the host of inspiring discussions on day 1 of the SB Leadership Summit — along with a shift in focus to being “known for what we allocate, not what we accumulate.”

What’s wrong with the world and how do we fix it? 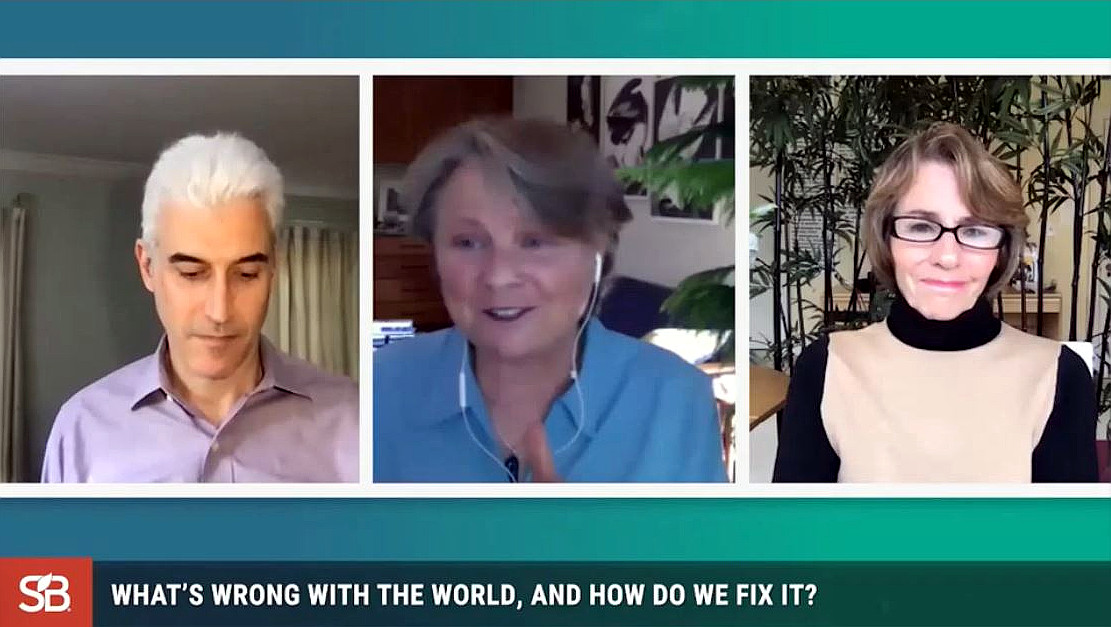 In true Sustainable Brands style, the SB 2020 Leadership Summit started by blowing minds wide open with this galvanizing and inspiring panel conversation. What’s wrong with the world, the panel argued, is that we are not listening or learning from the natural world; and instead, we are listening too much to money.

Lynne Twist, founder and President of the Soul of Money Institute, pointed out that money was originally invented to facilitate the sharing of resources so that everyone had what they needed; however, our current money system generates and exacerbates inequality. Referencing Buckminster Fuller, Twist said we need to move from a ‘you or me’ paradigm to a ‘you and me’ paradigm — and to work to be “known for what we allocate, not what we accumulate.”

Janine Benyus, co-founder of Biomimicry 3.8 and the Biomimicry Institute, said that in the natural world there is no proxy for money; rather, reciprocal trade holds ecosystems together. Organizations can learn from organisms; the ones that are generous get to stay. She asserted that we need to ask more of everything we design and make; so that each design has several beneficial functions.

As moderator Andrew Winston concluded: “We are asking too little of everything. The fix is that we are connected, and we embrace that with empathy and sufficiency.” You can be sure the SB community is fired up to connect and embrace the challenge, and, as Twist exhorted, “to leverage our privilege for social change.” 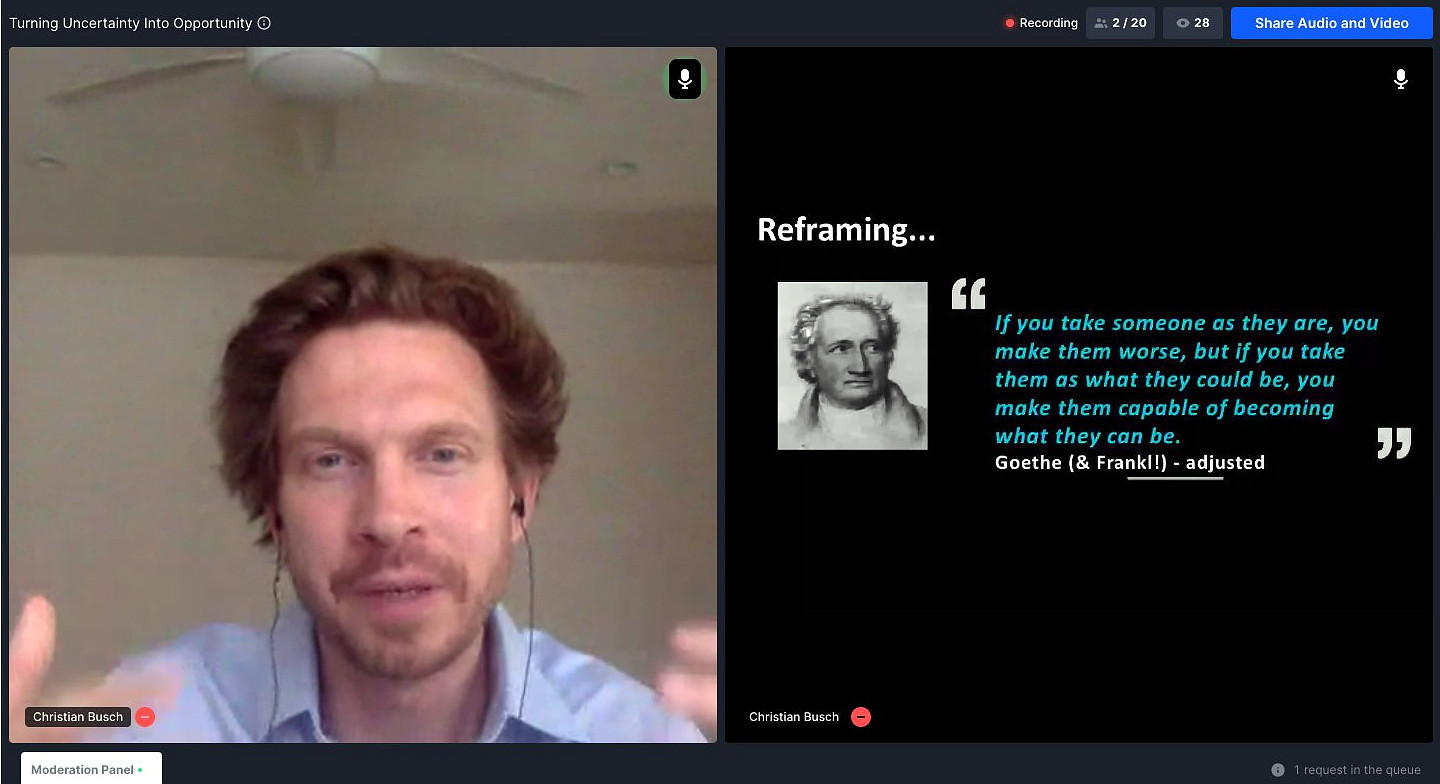 In his breakout discussion, Christian Busch, Director and Professor at the NYU Global Economy Program, shared how to use the science of serendipity — which he describes as unexpected good luck resulting from unplanned moments in which proactive decisions lead to positive outcomes — as a tool for innovation and impact. He explained how being involved in a car crash when he was younger made him think about serendipity and what life is all about. During his career as a social entrepreneur, he noticed that the most inspirational people somehow cultivated serendipity.

Busch recounted how Viagra was invented when medical scientists noticed that a drug being developed to cure angina had a particular effect on men; the drug was then developed to treat a different problem. The current global pandemic has also created interesting examples of businesses that have adapted to the unexpected change — including breweries manufacturing hand sanitizers and fashion designers making face masks. For those wanting to cultivate serendipity in their lives, try these practices:

How, then, shall we lead?

Here, in the new now, there’s a real feeling that people are looking for answers as they try to make sense of the world around them.

“Never before has true leadership been so important,” said Evelyn Webster, CEO of The Guardian US & Australia, in a conversation that took in the latest thinking from four CEOs heading up very different organisations.

As the impacts of COVID-19 continue to reinvent the rules for living and working, Richard Shadyac, President & CEO of ALSAC — the fundraising and awareness organization of St. Jude Children’s Research Hospital — maintained that courage will be a key business differentiator and a “must for leaders in difficult times.”

Shadyac called on CEOs to put principles such as inclusion, justice and humanity at the heart of their business. Referring to the work of St. Jude, which has helped push overall survival rates for childhood cancer from 20 percent in 1962 to more than 80 percent today through offering free treatment and care, he said: “In a pandemic, that model — access for all — it looks awfully humane, doesn’t it?”

Arguing that there was no force equal to the power of human compassion, Shadyac said that collaboration was no longer optional if businesses want to step up and help solve some of the world’s most pressing problems.

“One of real positives of self-isolation is that it’s proven we need each other now more than ever,” he said. “Failure thrives in isolation, that’s why it’s so frustrating to watch the world’s fractured response to COVID-19.”

Taking consumers on this journey will require new types of engagement that can empower them to make better choices, according to Nathalie Green. She heads up Doconomy, which has launched a credit card and app called DO that can not only track the CO2 emissions of purchases, but cap the climate impact of users’ spending.

Hailing DO as a new type of financial service tool that can inspire people to do the right thing for everyday climate action, Green pointed out that global consumption amounted to US$24 trillion last year. “90 percent of people don’t know that the greater part of their carbon footprint is linked to their consumption,” she said.

Green said one of her next aims was to help establish a global standard for measuring and tracking global consumption, as part of the company’s wider efforts to scale up financial solutions that can deliver banking with a conscience.

Purpose is what drives Richard Bergfors, CEO of Max Burgers — a popular burger chain in Sweden. Each year 6-10 percent of the company’s profit go to charity and aid projects, but Bergfors has his eye on doing even greater good by redefining what fast food means.

Simply put, it means offering the world’s first climate-positive burgers. Max has already mapped out how it intends to do this — mainly through a combination of capturing at least 110 percent of emissions, offering fewer beef products and more plant-based burgers, and working with suppliers who support regenerative agriculture.

“We can serve so many things between two buns that can have a really low climate impact,” said Bergfors, adding that the company’s total climate impact has been reduced by 20 percent per earned dollar since 2013. Its next goal is for every second meal sold in the company’s restaurants to consist of a non-beef product by 2022.