It would be easy to view BrewDog as little more than stunt-based marketing experts. But the company has been busy making sure to leave a more impactful dent on our culture, putting the all-important issue of climate change front and center.

Anybody that has read James Watt’s 2015 book, Business for Punks, will already have a grip on his craft beer company, BrewDog.

“Don’t waste your time on bullsh*t business plans. Forget sales. Ignore advice. Put everything on the line for what you believe in,” says the company’s co-founder.

Channelling the punk spirit of Malcolm McLaren and Johnny Ramone, Watt tells the story of how his company came into being. “We tore up the rule book and did things on our own terms.”

Since the business — now the world's largest craft brewer — was founded by Watt and Martin Dickie in 2007, such punk attitude has largely manifested in the way the business has marketed its range of ales and lagers.

For example: As the UK saw its first wave of Coronavirus in March the country reeled in a political scandal that saw the Prime Minister Boris Johnson’s special adviser, Dominic Cummings, break the lockdown rules. After contracting COVID-19, rather than self-isolate in London, he drove 270 miles north to stay with family. A few days later, while in recovery, he took a day trip to nearby Barnard Castle in Durham. Asked why he did so, he said he was merely testing his eyesight — as he was worried the virus might have affected his vision. Johnson and the Government rallied around Cummings. Rather than sack him, they protected his job and position at the heart of government.

BrewDog responded to the controversy in its trademark, cheeky way: It launched a limited-edition Barnard Castle Eye Test IPA, billed as “short-sighted beer for tall stories,”which went down a storm with customers furious at the Government’s hypocrisy. “Rip up those stuffy old textbooks, reject the status quo, tear down the establishment and embrace the dawn of a new era,” as Watts writes in his book.

It’s certainly a strategy that is helping to grow the company. As well as making beer, the company also operates roughly 80 bars worldwide — including its first alcohol-free bar in London which opened in January 2020. In 2019, its Punk IPA was the best-selling craft beer in the crowded UK market.

It would be easy to view BrewDog as little more than stunt-based marketing experts. But clever, rule-breaking communications will only get you so far. The company has been busy making sure to leave a bigger, more impactful dent on our culture, putting the all-important issue of climate change front and centre.

In July, the business launched its sustainability programme, known as BrewDog Tomorrow. There is a clear mission: to make the company the most sustainable drinks brand on the planet.

Today, all of the company’s UK electricity comes from wind power; and it has plans to do the same across the world. All of its spent grain, the biggest by-product of brewing, is being turned into biogas; and it is working with local partners to turn used malted barley into gas, vehicle fuel and organic fertilizers.

There are also big investments being made in fully electric delivery trucks. Meanwhile, the focus on local brewing — in Scotland (where everything started), the US, Australia and Germany — is reducing the distance beer has to travel.

While plenty has already been achieved, there is a recognition of a need to go further and faster.

“We thought we were doing our part for the planet as a business, but after our co-founders heard Mike Berners-Lee speak on the subject, we started doing more research into the matter,” Jason Block, CEO of BrewDog USA, told Sustainable Brands™. The business looked at the totality of its carbon footprint — “it was clear we were part of the problem.”

“Even with the measures we had already taken, we needed to do more to positively impact the planet and climate crisis. We’re running out of time and need swift, meaningful action to reverse course. We couldn’t let COVID-19 delay us.” 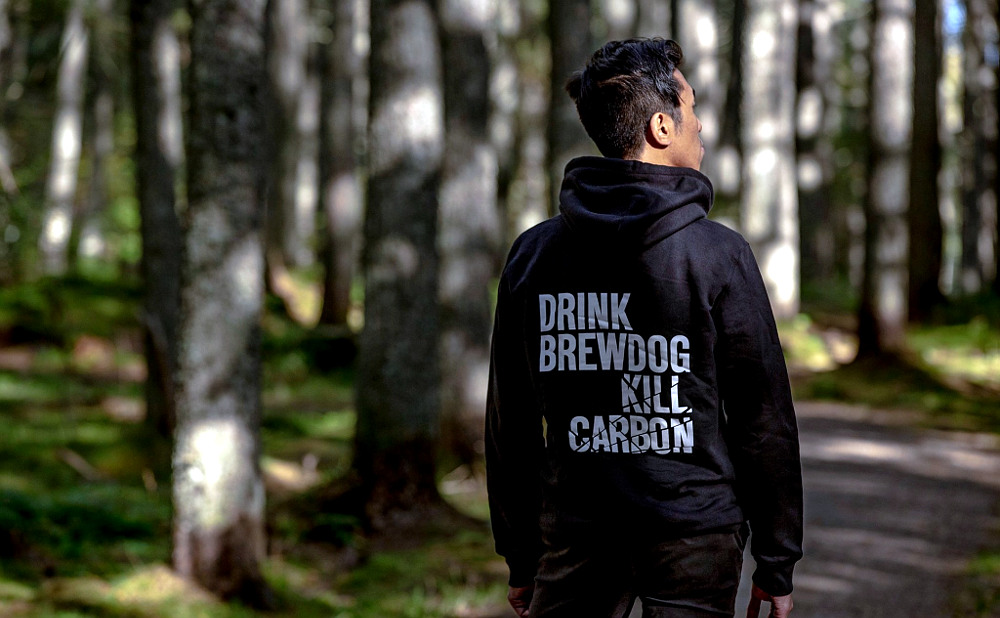 In the latest chapter of BrewDog’s sustainability story, it has become the first employer in the world to ensure that all of its staff are carbon negative, too. The planet-saving employee perk allows staff to calculate their personal carbon footprint using a mobile app called Pawprint. They input information such as how they get their electricity at home, their travel habit, and what food they consume. Once the calculations have been done for all 2,000 employees, BrewDog will then remove twice as much carbon from the air each year as each staff member is responsible for.

It promises to double offset employees’ carbon footprints immediately with the help of the current carbon removal projects it is funding; and eventually, with the BrewDog Forest — a 2,050-acre site in Scotland where the brewer will plant trees as a means to remove carbon from the air.

“We expect most of our employees to take part in this. It’s not a requirement, but the only way we can offset our team members’ carbon is if they use the app,” says Block, confident that BrewDog staff will be up for the challenge. “Sustainability is part of our culture; so while we don’t recruit for it directly, it is inherent in our process.”

The global craft beer market is set to continue to grow, by US$47.8 billion between now and 2024, at an annual growth rate of 13 percent. BrewDog’s focus and investment in sustainability is clearly important to growing its share of a crowded and competitive market.

“Every decision we make moving forward will be with sustainability in mind. We’re making sure we have a planet to brew on,” Block adds. Right now, the business is prioritising carbon reduction in its own operations. While it’s “crucial to think about a business’ end-to-end carbon usage,” there is still “no shortage of opportunities” in finding efficiencies in-house.

“Being scrappy and tenacious is part of our DNA. We look for the most efficient ways to reach our sustainability targets, but there is no doubt it’s added expense. We’re committed to making large investments, but we have to be able to do that while remaining profitable for our shareholders.”

It is a big 24 months ahead for the business. In that time, its Ellon brewery in Scotland will become completely carbon neutral and zero waste. And a planning application to build an anaerobic digestor has been made to turn wastewater into clean water, green gas, organic fertilizer and food-grade CO2.

And the company is also working with Berners Lee and the design team at Made Thought to create a new blueprint for what a sustainable bar of the future might look like — something it can implement across its network of bars globally.

Some of this work will be paid for via the company’s Equity for Punks Tomorrow crowdfunding initiative, a unique way to get customers excited about sustainability while taking a stake in the business. Today, BrewDog has over 150,000 shareholders across the world.

“We have received extremely positive feedback on our sustainability initiatives,” Block says. “Yes, there are certainly some who aren’t as interested — but they’re in the minority.

“Regardless of who’s behind it, we’re confident it’s the right thing for the future of the planet and our business.”