Vigil Yu
Published 4 years ago. About a 4 minute read.

On April 21st, at the Palace Cinema in Raffles City, Changning, Shanghai, I attended the premiere of the first of a three-part documentary series, “Jackie Chan’s Green Heroes” — a joint project by the action movie star, National Geographic Partners LLC and Buick — which captures stories of sustainability innovators to inspire and educate the public.

The first film, shot in October and November 2017, features Arthur Huang, a structural engineer from National Geographic Society’s Emerging Explorers, and founder of Miniwiz — a global leader in post-consumer recycling technology that has designed everything from a recycled plastic, multi-tasking USB charging device for EKOCYCLE to Nike’s Air Max packaging and a concept store in Shanghai constructed from waste materials. A few years back, Chan saw Huang introducing his circular economy practices on a National Geographic program and was deeply impressed. He took a picture of Huang's name on TV, got connected and has been working with him since.

Over the years, Chan became increasingly concerned with the huge amount of trash — often tens of thousands of plastic water bottles — generated at his movie sets, and has been seeking, in his own words, “redemption,” so his exposure to Huang’s technical expertise as a designer, engineer and architect came at the perfect time. Prior to the documentary, Miniwiz was commissioned by Chan to furnish his properties with items made from secondary materials: Pentatonic chairs made of recycled bottles and packaging waste, a wall system made of recycled CDs and tiles made from recycled plastic, etc.

This time around, Chan wanted to find a solution to turn waste into useful materials in the most remote areas of the world (where many of his movies are shot). This quest coincided with Huang’s vision of a circular economy: a decentralised recycling system that sources locally and produces products that can be used near-site. The idea lead to the development of Miniwiz’s TRASHPRESSO, the world’s first mobile, solar-powered recycling plant, which transforms discarded plastic bottles into architectural tiles. 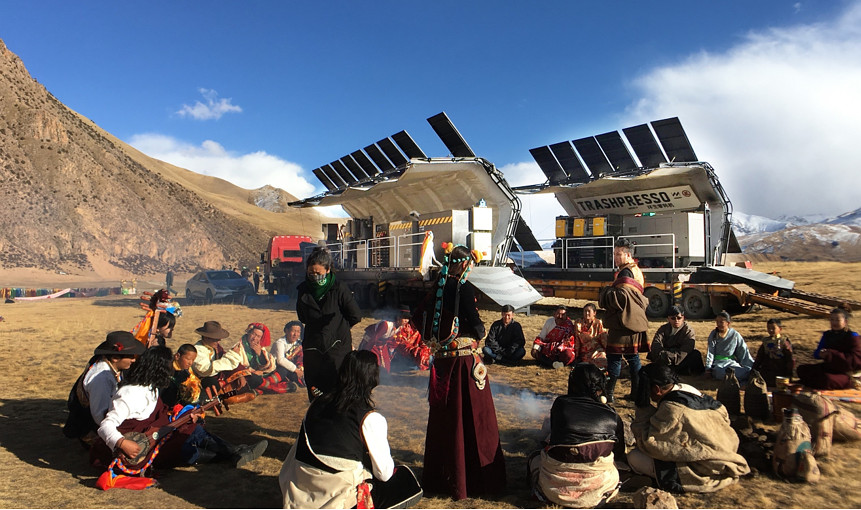 For the documentary, the team — Chan, Huang, Buick and National Geographic — took TRASHPRESSO to Zadoi, a Sanjiangyuan county sitting at the 4200m Qinghai Tibetan plateau. The area, which includes the Sanjiangyuan reserve, a key source of China’s three major waterways — the Yellow, Yangtze and Lancang rivers — has been facing pollution issues around plastic waste.

After overcoming technical challenges from the high altitude and cold climate, the team worked with local governments, NGOs and kids to collect plastic waste, which TRASHPRESSO turned into construction tiles for use in walls or flooring.

“Until now, industrial-grade recycling has been limited to manufacturing centers. The TRASHPRESSO overcomes distance and energy barriers by showing that upcycling is possible everywhere,” Huang said during a post-screening Q&A. “Not only does it serve to transform trash onsite, it also serves as an educational tool in isolated communities… It is a first step and an experiment.”

Huang said he hopes that the documentary will raise awareness and make consumers more conscious about the environmental and social impact of the products they choose.

Chan said that he wanted to use his fame to spread the message, that everyone could be a "green hero” if they just act.

“Don’t do good just when you are told by others; just do, even if it’s just a small action like picking up trash,” Chan said. He’s hoping to take TRASHPRESSO to future movie sets, to turn the local plastic waste into construction materials and build schools.

“Jackie Chan’s Green Heroes,” featuring Arthur Huang, can now be seen on the National Geographic Channel. Parts two and three of the series are in pre-production.