GlobeScan
Published 1 year ago. About a 10 minute read.
Image: Rodnae Productions/Pexels
Sponsored Content / This article is sponsored by GlobeScan.

So, what’s still preventing consumers from living more in line with their values? GlobeScan has identified seven critical “unlocks” to help consumers to change their behaviors, and start aligning their lifestyles with their values and aspirations.

Results from GlobeScan’s 2020 Healthy & Sustainable Living study show that a gap remains between what people say that they want to do to live more sustainably and what they are actually doing. We need to recognize that there are still significant obstacles for most of us when it comes to aligning consumption with our values.

The study has been tracking consumer attitudes and behaviors since 2019, with annual surveys of over 25,000 respondents across 25+ countries around living healthier and more sustainable lifestyles. The research program has been collaboratively designed and launched with a range of partners — including CVS Health, IKEA, PepsiCo, Visa, and WWF International — to help better understand the mindsets of people globally and how to best help them make positive changes in their lives and for the planet.

Results of the study make it clear that climate change remains a top concern for most, with 60 percent of people globally saying it is a very serious issue — including 53 percent of US consumers. Concern about the climate and other environmental issues has remained constant over the past year, even in the context of the pandemic and subsequent economic impacts. Many consumers continue to feel guilty about their own environmental impact, with half saying that they would like to be “a great deal” more environmentally friendly.

Nevertheless, only one-quarter claim that they have made major changes to be more environmentally friendly in the past year, highlighting the significant gap between aspirations and current behavior. Consumers increasingly say that they are considering rewarding more responsible offerings by companies, but the proportion who say they have actually rewarded responsible companies has remained stubbornly constant over time. 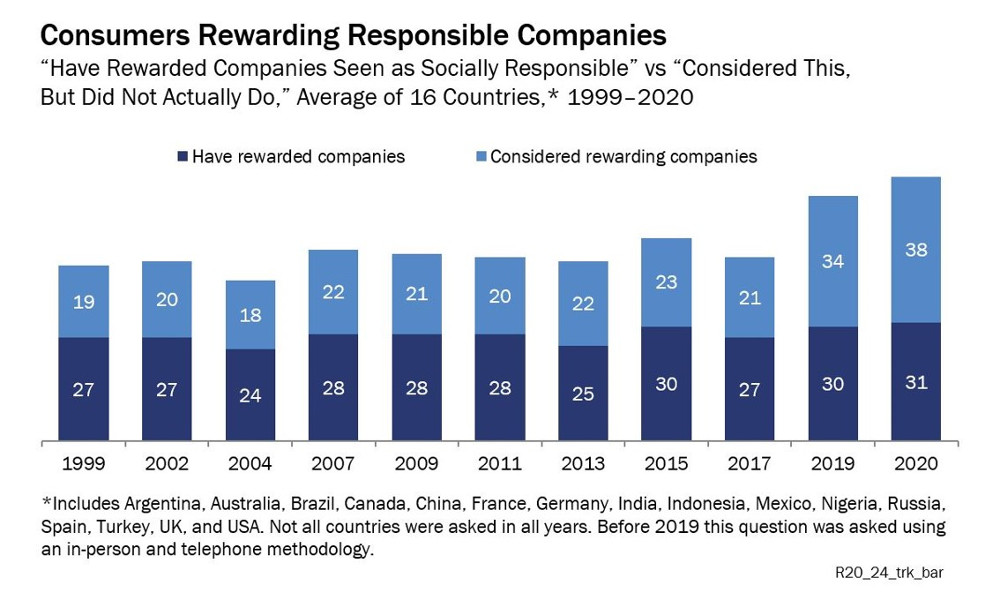 So, what prevents consumers from living more in line with their values? GlobeScan has identified seven critical “unlocks” to help consumers to change their behaviors and start aligning their lifestyles with their values and aspirations.

When asked what companies could do to help them live healthily and sustainably, results from the study show that consumers most often point to access to more affordable products and services that are good for people and the planet. This is consistent across nearly all markets and generations, suggesting that premium pricing of healthier and sustainable options remains a prominent barrier for most. When faced with a cheaper, non-healthy or non-sustainable option, many consumers often feel that there is little choice. 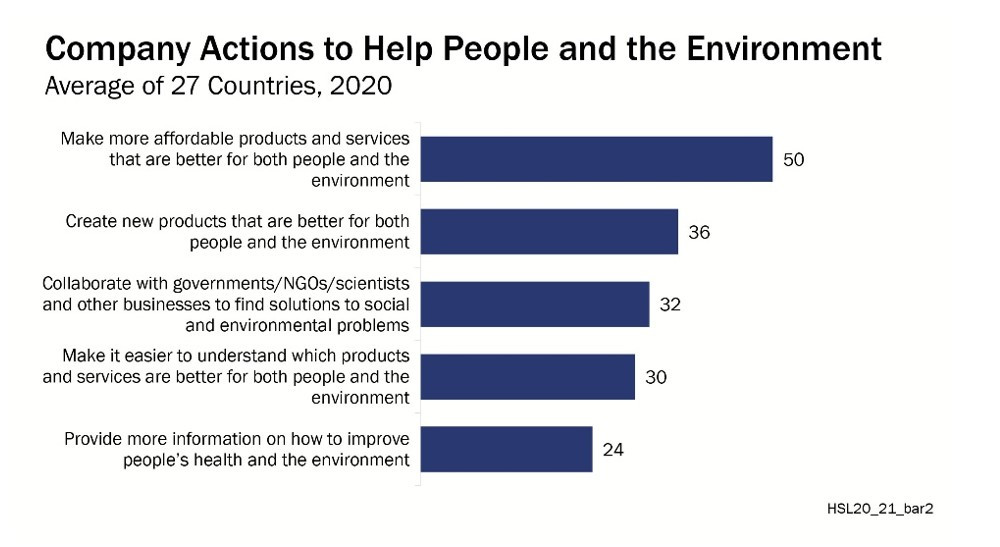 If brands do not make affordability a priority, healthier and more sustainable consumption patterns will never become a reality. Premium pricing is the single most prevalent barrier to consumer behavior change at scale. Brands such as IKEA are leading the way by attempting to bring sustainable solutions that are affordable to consumers on a large scale — such as circular products, energy-efficient solutions, and plant-based food options.

Although GlobeScan’s data show that trust in large companies has increased over the past year as businesses have responded to the pandemic, trust in business remains low in many of the markets surveyed — and well below those of scientists, NGOs or even governments in some countries. When asked about their trust in various institutions to operate in the best interest of society, net trust in global companies (those who say they trust in global companies minus those who say they do not) ranks ninth out of ten institutions. 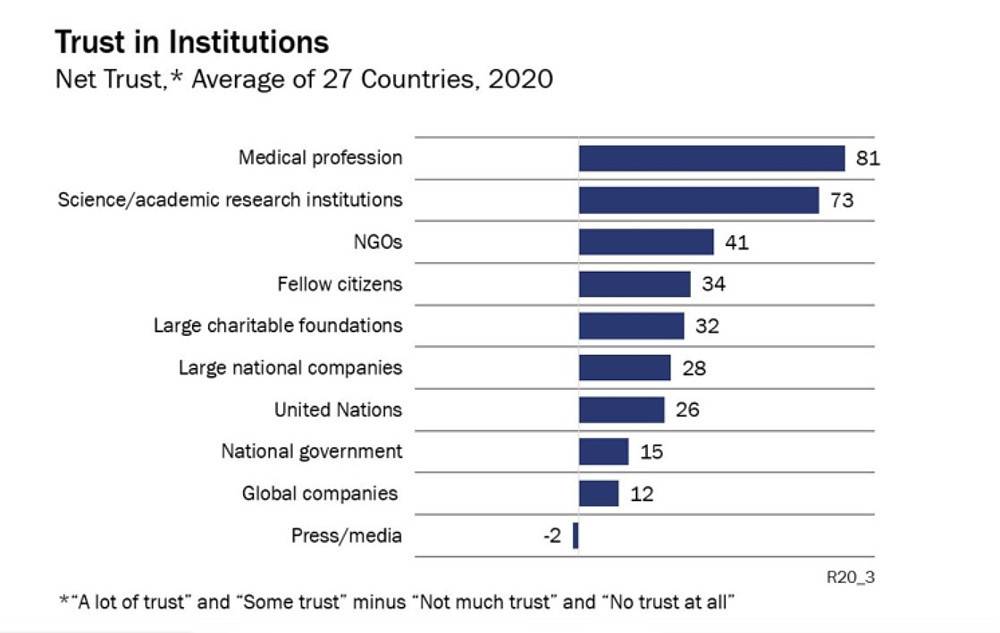 As a result, many consumers are cynical about communications from companies. Only about half (51 percent) feel that companies communicate honestly and truthfully about their social and environmental performance — making it difficult for brands to communicate and market in a credible way. Brands need to boost credibility by communicating better and being more transparent, but also by using tools such as third-party certifications or collaborations with institutions that are more trusted, such as NGOs or academic institutions. FSC is a great example of a certification that will help boost trust in brands.

It can be hard for consumers to identify sustainable options unless a product or brand can differentiate itself in the market. To stand out, brands may need to make radical rather than incremental changes (e.g., electric vehicles vs traditional cars) and/or they need to engage consumers differently around product attributes (e.g., Patagonia). Consumers are certainly interested in understanding how brands are trying to be more sustainable — as many as 85 percent globally say they are very interested in learning more about the ways that some companies are trying to be more socially and environmentally responsible.

Nevertheless, few companies manage to stand out. In the 2019 wave of the study, consumers were asked to name a specific company or brand that helps them live in a way that is good for themselves, good for other people, and good for the environment. More than half globally (56 percent) could not name any. Proportions who could not think of a single company or brand helping them live healthier or more sustainably were even larger in many markets in Asia, Europe and North America — including the United States, where nearly two-thirds of consumers (62 percent) were at a loss for a response. 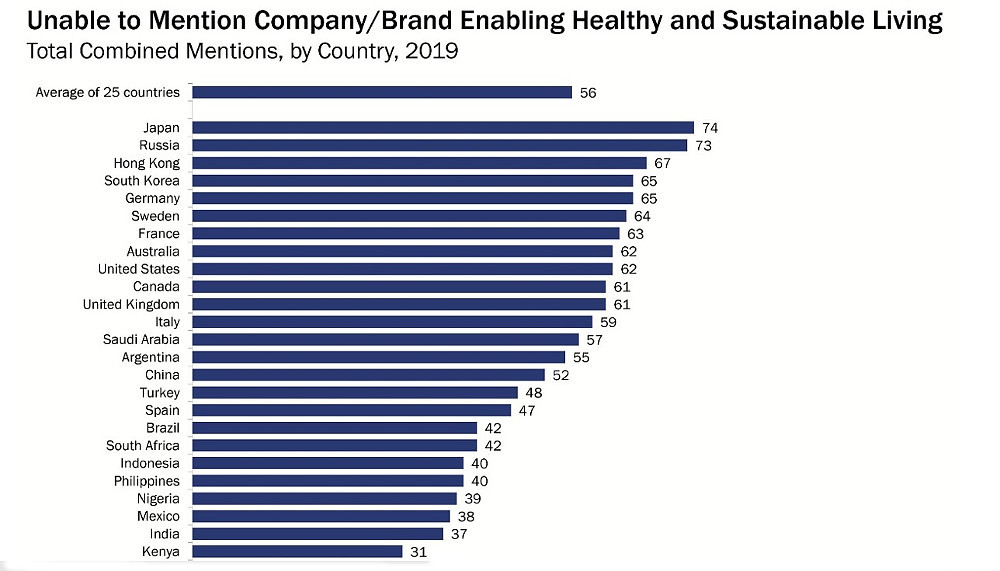 Clearly, companies must step up their communication and design efforts to reach consumers trying to make healthier and more sustainable choices. But brands also need to innovate to provide offerings that are radically, instead of incrementally, better for health and the environment so that consumers can see a real difference. One example of this is SodaStream, a recently acquired PepsiCo brand that has been a unique example of an accessible, reusable model of consumption with multiple health (low calories, no artificial ingredients) and environmental (reduced single-use plastic) benefits.

GlobeScan’s research shows that consumers increasingly feel that their desires collide with their environmental footprints. Almost half of consumers across the world (47 percent, up 13 points compared to 2019) say that what is good for them is often bad for the environment. At the same time, people are increasingly feeling guilty about their environmental impact (53 percent, up 10 points compared to 2019); and three in ten, especially young people, also say they felt ashamed about living a lifestyle that is not environmentally friendly in the past year. 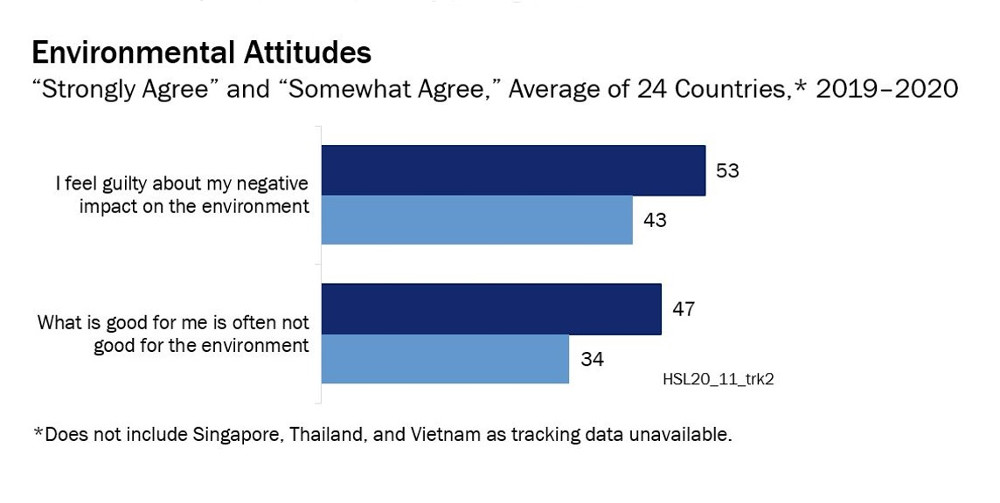 There is a big opportunity for brands to offer consumers choices that are both desirable and sustainable, resolving the trade-off that many people feel they must make. This can best be done through the development of better products and services, as well as more effective communications. Tesla has managed to create a product that has become both a sustainability game-changer and an object of desire for many. Similarly, for both the high-end beauty and food industries, organic and sustainably sourced ingredients are increasingly becoming essential selling points. However, these products are often sold at a premium price, again limiting access for most.

One of the key insights from GlobeScan’s 2020 study is that people are interested in engaging in behaviors that they believe are easy to change and are less keen on embracing changes that are perceived to be more difficult.

Behavior changes that consumers perceive to be easy and which are of high interest include improving their personal wellbeing, changes in the household (e.g., saving water at home, reducing waste), and choosing products with less packaging. Changes such as renting items or buying them secondhand that are more in line with a circular economy, as well as eating plant-based foods, traveling responsibly, and adopting the use of new technologies such as electric cars are all seen to be relatively more difficult and less desirable. 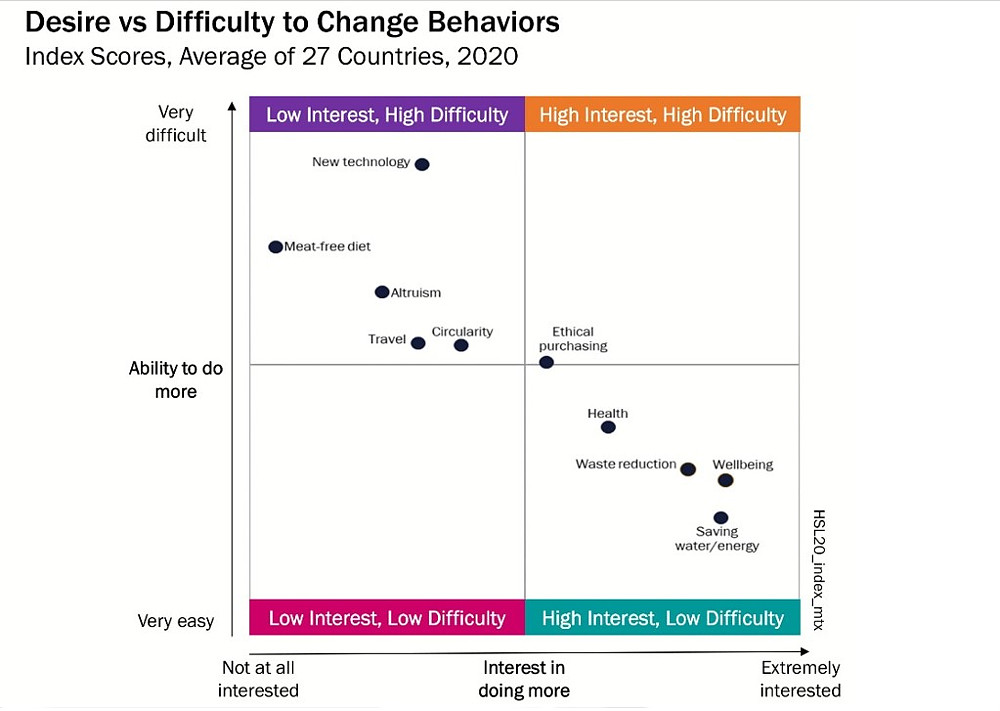 The strong correlation between levels of interest in behavior change and perceived difficulty suggests an opportunity to spur more action through stressing convenience and demystifying the efforts involved in healthy and sustainable living. Showing consumers how easy it is to live in ways they want is a simple but critical part of unlocking greater activation. Visa provides an example of a company trying to eliminate friction from sustainable behaviors, such as “greener” mobility. The company is working with transit authorities around the world to make public transit simple and easy via digital payments.

GlobeScan found that 87 percent of consumers now say that they try to support companies or brands that are making a positive difference in society through their products, services and operations. This is up significantly from our Radar public opinion study in 2016, illustrating the growing interest among consumers in the whole notion of purposeful brands. 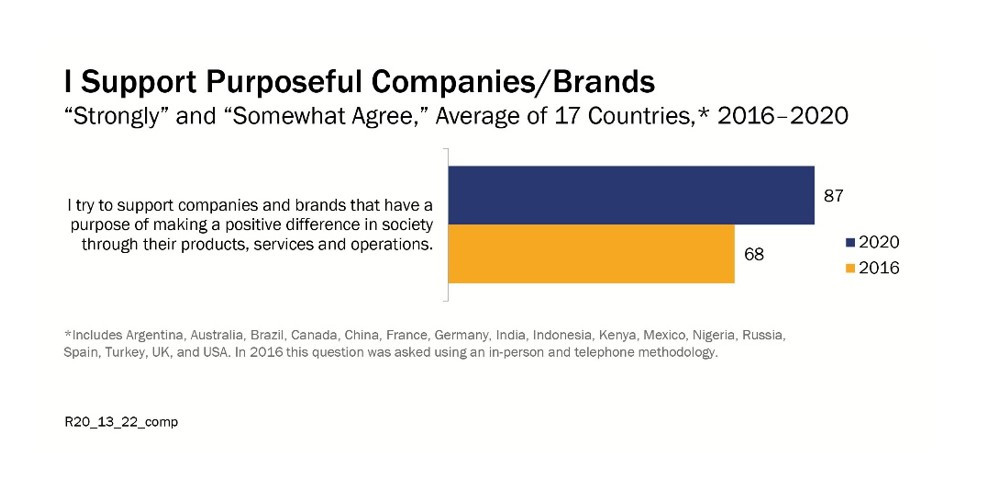 CVS Health is a company that has fully embraced its purpose of helping people on their path to better health. That purpose not only guides the way the company does business, but also helps CVS Health build deeper relationships with its customers. One of the company’s most notable demonstrations of purpose was its 2014 decision to end tobacco sales. Since then, the company’s purpose continues to be a critical factor in its success and ability to engage consumers in health and wellness.

Through detailed analysis of consumer research over many years, GlobeScan has identified that the ability to drive greater behavior change among consumers requires proof that societal actors such as government, companies, civil society and fellow citizens are all doing their part to be sustainable. Without the reinforcement of large-scale signals that sustainable lifestyles are becoming the norm, it is difficult for most people to change the way they live. 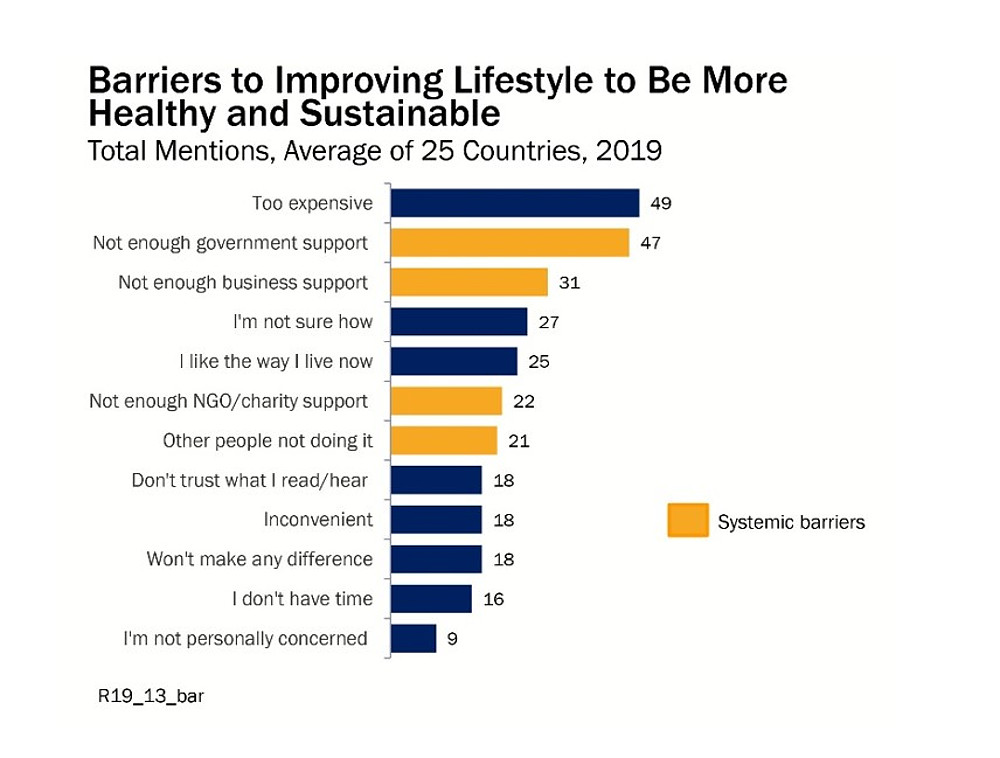 Helping to create the conditions for systemic change is what WWF is attempting to do with its markets practice — how to bring brands, science, policy and consumers together to make markets work better for sustainable outcomes, and shift production and consumption.

If brands are able to take action on each of these seven “unlocks,” it will help consumers to change their behaviors and start aligning their lifestyles with their values and aspirations. GlobeScan’s research shows that younger generations in particular are looking for brands to be transformative when it comes to social and environmental issues. There is a thirst for something more exciting and dynamic from the marketplace among younger people; and the more that brands are able to help bridge the gap between people’s aspirations and actions, the easier it will be for them to make the changes needed to help realize healthy, sustainable living at scale.