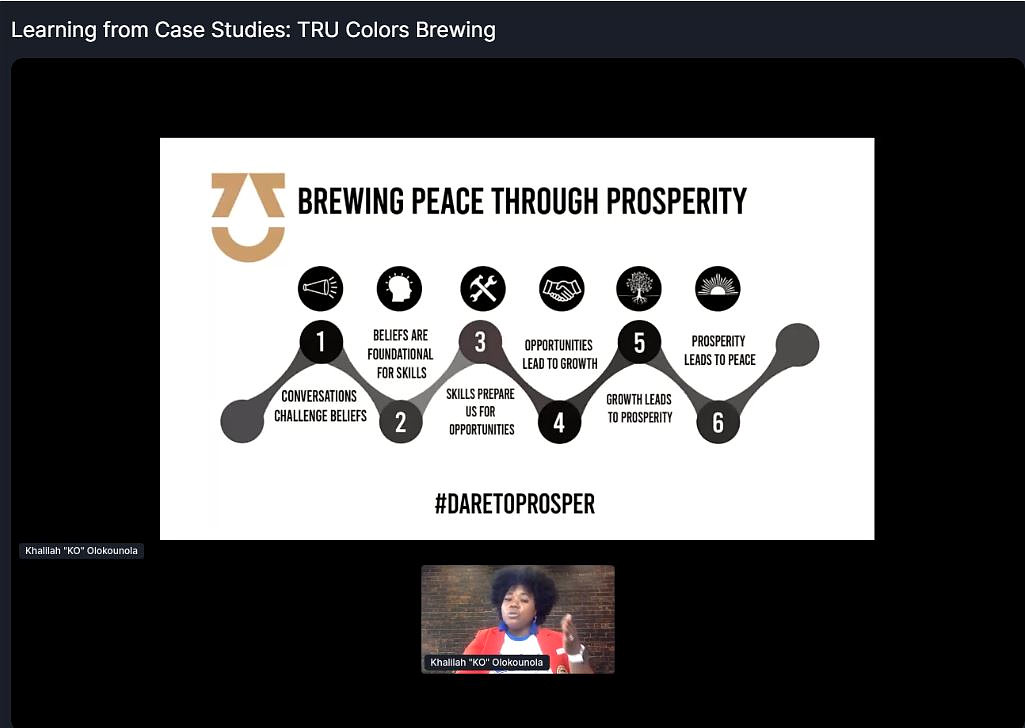 According to Khalilah ‘KO’ Olokunola, VP of human resources at TRU Colors Brewing, every company or organization has ‘BAGS’ — behaviors, actions, groups & gangs, and systems — that they carry or conceal.

If businesses are serious about getting a grip on racial justice and equity within the workplace, then those BAGs need to be unpacked.

It starts with a brave conversation, one that challenges people’s preconceptions or belief systems. “You really can’t understand or know someone until you speak to them,” KO says.

Beliefs, she explains, are foundational for building skills — and skills prepare people for opportunities that in turn can lead to growth, prosperity and peace.

“People are looking for opportunity, not opposition. But sometimes they find themselves in a space where they feel overwhelmed because they feel overlooked.”

TRU Colors is a unique and inspiring enterprise — as its beer is brewed by active gang members who believe that non-violent communication and economic opportunity can change their communities, and the world, for the better. The structures that TRU utilizes to build bridges between rival gang members and cultivate new types of cooperation are similar to those that exist within gang culture. KO says it’s a framework that can be used to reposition people within all types of organizations, so they start working together for a collective good.

She believes TRU’s approach is transferable for white-led organizations looking to close the intention-action gap on their commitments to diversity, equity and inclusion; but says it involves embarking on a journey of rediscovery that can take people outside of their comfort zones, and accepting responsibility for “the things you do, and the things you don’t do that you know you should.”

Brands that have a long history of DEI are arguably better positioned than most when it comes to moving the needle here. In the 1940s, PepsiCo commissioned its first African American sales team in the US — recently, it pledged to invest $400 million over 5 years to lift up Black communities and increase Black representation within its company.

Jaren Dunning, PepsiCo’s legal counsel & human rights director, says an internal leadership team has been created to oversee each of the three pillars that will drive its journey towards racial equality — people, business and community.

“We want to identify where the best areas are to focus on,” he says. “Engaging meaningfully with our staff on our new commitments, having those brave and difficult conversations, helps embed that thinking.”

The journey is likely to be an emotional one as PepsiCo evolves its thinking and understanding of what can be highly sensitive and complex issues. Inevitably there will be stumbling blocks along the way — PepsiCo’s 2017 Kendall Jenner ad being a case in point.

“That was a point of reflection for us, we had to take a step back,” Dunning admitted, adding that the process involved “deepening our understanding of our marketing practices in terms of embedding our commitments.”

A panel in the afternoon discussed DEI in the context of product development and design. According to Kevin Bethune, founder & chief creative officer at dreams • design + life, if companies want to become attractive destinations for Black talent, they need to invest in the whole representation piece around DEI. Talking about how the role of design can work as a proactive force for driving better DEI, he said:

“Recent weeks and months have shown us we can no longer treat our individual disciplines in isolation — we have to think about the broader ecology. If you have 15-25 percent representing Black voices and you are not serving them, you are missing an opportunity.”

Zoe Middleton — director of design, marketing & product development at Dutch design agency Fabrique — believes educational opportunities such as scholarships and internships need to be made more accessible for young people within Black communities. “When I’m interviewing for new talent, I’d definitely like to see a wider variety of product designers,” she says.

Echoing this, David Rice, founder & chairman of the Organization of Black Designers, says he’s seen a drop in education enrollment in design schools due to cost. “There maybe not enough people of color to fill the roles out there for employers looking to recruit more diversity into their design teams.”

He says giving young people early exposure to design would help tap into future potential talent, and that his organization aims to deliver a series of design boot camps to harness this opportunity.

Using the power of brand to lead on activism agendas such as Black Lives Matter can pay dividends if done well. Case in point: Ben & Jerry’s “We must dismantle white supremacy” statement following the brutal killing of George Floyd represented one of the most powerful corporate condemnations of systemic racism.

Issued within days of Floyd’s death, the statement drew plaudits far and wide — earning 1.3 billion media impressions, over 1.2 million mentions and 3.5 million page views. According to Christopher Miller, activism manager for Ben & Jerry’s, “No action in the company’s history generated the buzz that this did.

“The language we used was very different to other corporations. We were very blunt in calling out these issues," Miller said. "We also offered some solutions.”

The statement called on President Trump to stop using his Twitter feed to normalize racist ideas; and on Congress to pass H.R.40, legislation that would create a commission to study the effects of slavery and discrimination.

Offering support for ideas and policies that can begin to help communities heal from such events is critical if brands want to be seen as authentic, Miller asserts, adding that corporations should seek to root their world view in something real, not consumer insights, and include those most impacted in their activism work.

“You’ve got to get comfortable being uncomfortable — that’s part of the work around race.” — Christopher Miller, Ben & Jerry’s

The Black Lives Matter movement is widely regarded as the largest of its kind in history. Karen Carter, chief human resources & inclusion officer at Dow Chemical Company, believes the movement represents “a call for reckoning for all businesses.”

Through its ACTs approach featuring three pillars of action — advocacy, community and talent — Dow is seeking to accelerate internal change when it comes to addressing racism, inequality and injustice. Carter says the company has work to do to improve workforce diversity. Its 2019 Inclusion Report notes that the US population is estimated to be 13.4 percent Black, yet the company’s US employee population is just 8.5 percent Black.

“I have a responsibility as chief human resources and inclusion officer to change our systems, our cultures — to bring people together,” Carter said. “Inclusion and diversity make good business sense.”

Understanding recruitment and retention barriers is one element of this. Carter cites work Dow has done around attrition rates as an example, when it interviewed more than 60 African Americans that had left the company to better understand their reasons for leaving.

“This meant we could narrow down the issues,” she says. “Look for the hotspots, then go address them. We know that the data doesn’t lie.”

ORGANIZATIONAL CHANGE
BCLC: How a Gambling Corporation Transformed into a Social Purpose Company