Organizational Change
#JustBrands:
To Effectively Address Equity, Brands Need to Rebuild From Within

Day 1 of Sustainable Brands’ Just Brands virtual event brought together business, racial justice and social good leaders for frank discussions on the context for racial inequities in the US, what equity really means in 2020, and businesses' role in creating it.

The murder of George Floyd by Minneapolis police in late May reignited a surge of racial justice protests and activism across the country, and saw major brands taking strong positions in support of the Black Lives Matter movement. However, in this day and age, the textbook response — release a public statement, commit to donating money, or promising to take “diversity” seriously — is no longer enough.

“We’re starting to see a growing sense of responsibility,” says Sandy Skees, EVP/Global Lead of the Innovation & Impact Practice at Porter Novelli, and Chair of the Advisory Board at Sustainable Brands™. “This moment of racial and social equity reckoning has brought that home to corporations in a way that we haven’t seen before.”

This was one of the main themes during the two-day Sustainable Brands 2020 Just Brands virtual conference this week — which brought together business, racial justice and social good leaders for a series of frank discussions on what equity really means in 2020. 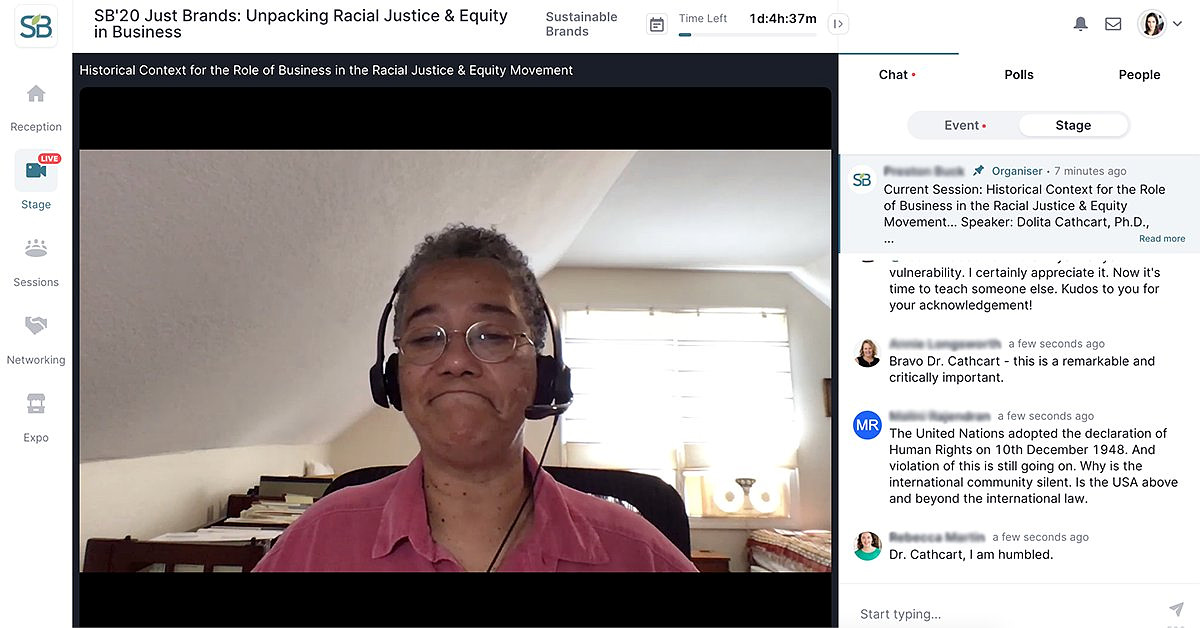 One of the first speakers was Dolita Cathcart, an Associate Professor of History at Wheaton College in Massachusetts, who schooled attendees on the broader context of racial injustice in the US, from the advent of slavery back in 1619.

“Institutional racism permeates every aspect of our culture. The primary victims of racial capitalism are people of color, but white America suffers collateral damage from these policies, too,” Cathcart said, noting how the COVID-19 pandemic — which initially affected communities of color more than whites — has, partially due to racist policies, become a national crisis.

Central to this was the understanding and need for many major brands and corporations — nearly all of whom were founded by white men and have been supported by white capital, via financial institutions or laws that discriminated against communities of color — to acknowledge their role in perpetuating racial capitalism. 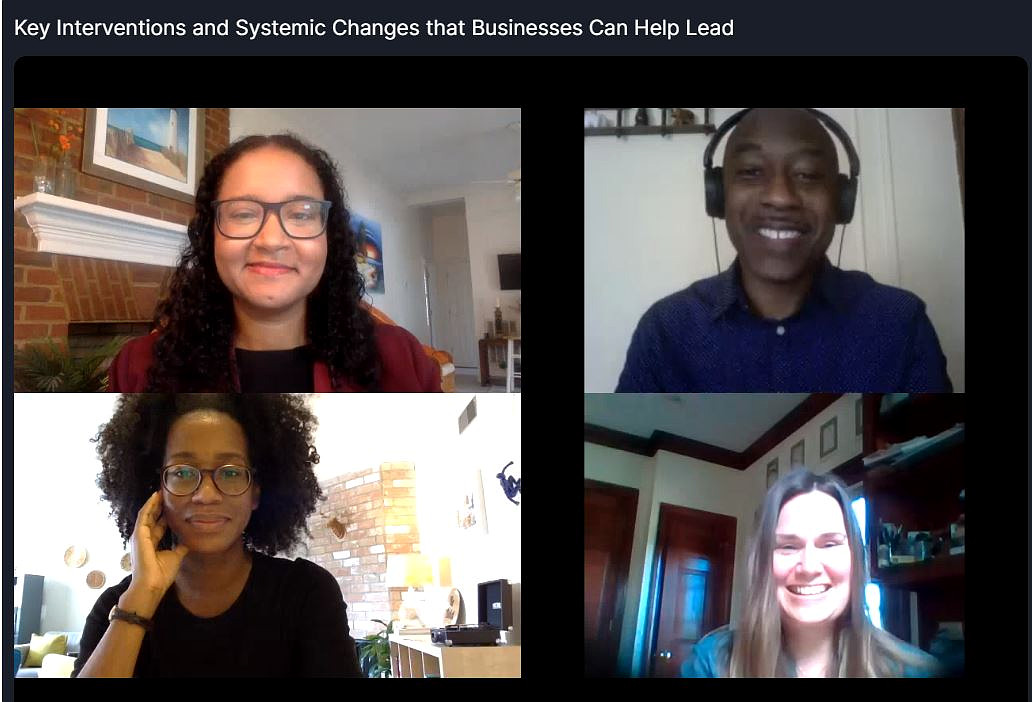 “Businesses use systems that were designed at a time when I couldn’t work for them ... we build off of these legacies, without thinking of the purposes for which those systems were designed,” said Erin McClarty, a social change architect and attorney who works with businesses and other organizations to design programs for real social impact.

Many participants spoke about how shifting cultures meant working from within, to understand how organizations perpetuated — either indirectly or directly — racism and inequity, and also how they often benefit from an unequal system. For example, how are they making money, and is that money perpetuating generational inequity? 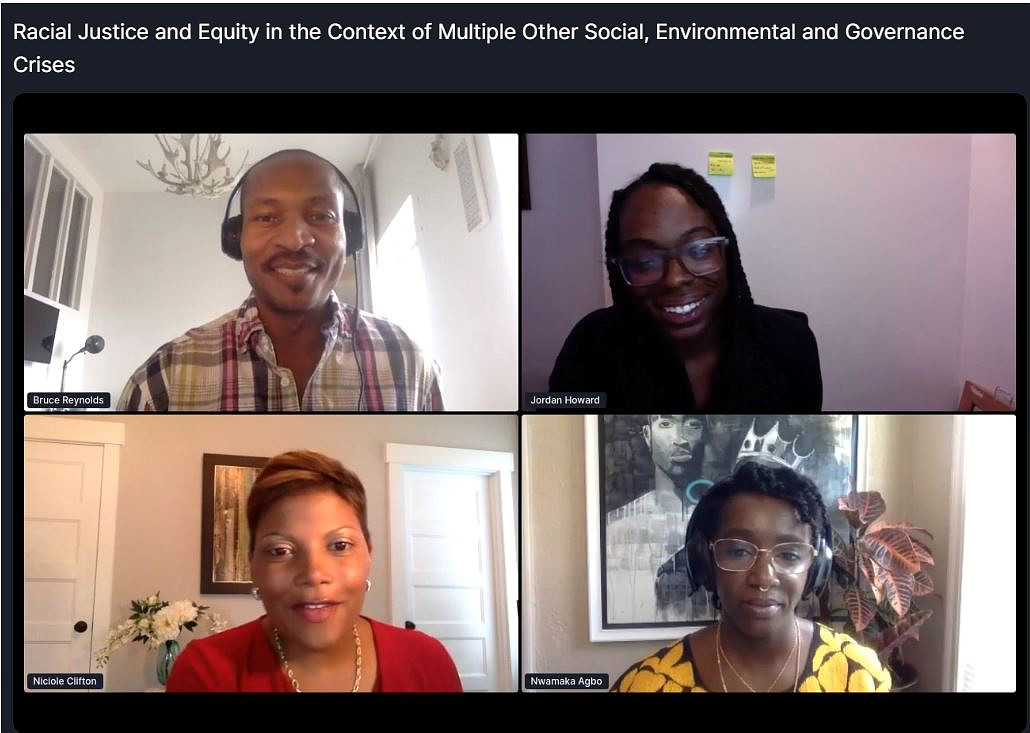 “Be clear about how companies are making profits, and if those profits are closing the racial and gender gap,” asserted Nwamaka Agbo, a restorative economics consultant. “Are you giving back to social justice organizations at the frontline? Be explicit about who you are as a company.”

For brands, this means as much of an internal focus as external, as many of the key changes require staff, leadership and management to understand the deeper issues at play.

For example, UPS has been having internal conversations and focus groups to increase discussion around sensitive topics. They were started after realizing how hesitant workers, particularly workers of color at lower levels of the massive company, were to speak up about their experiences.

As Nicole Clifton, VP of Global Public Affairs at UPS, explained: “Our leaders had difficulty having these hard conversations about race and painful topics at work. We thought it was important to start having these focus groups, so that people could talk about what was on their mind and share these experiences.” 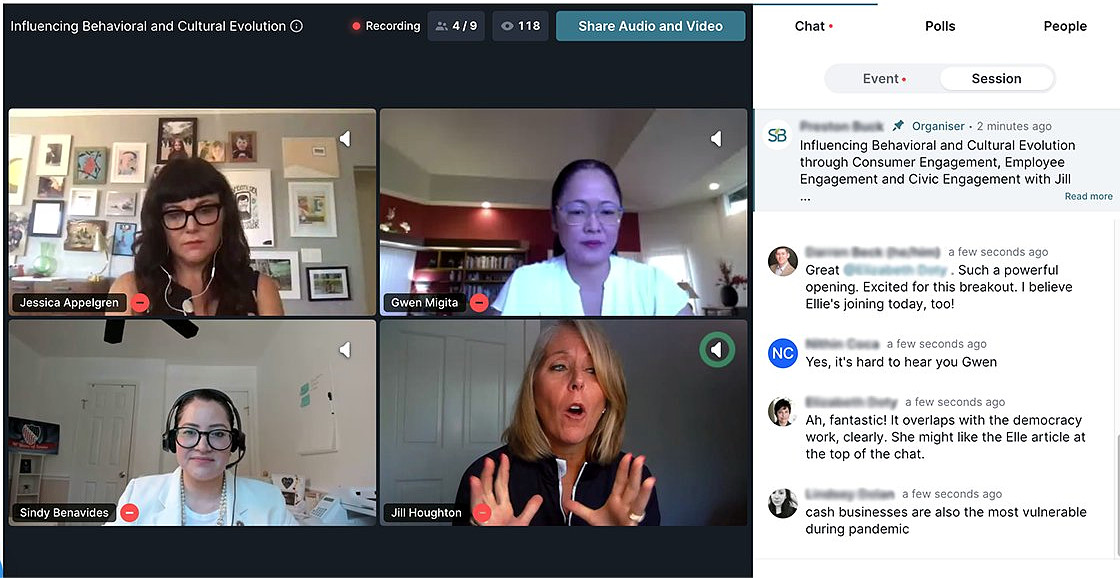 Impossible Foods has always prided itself as being a mission-driven organization, but both the pandemic and the racial justice protests made the company realize that it needed to broaden its definition and scope of “food system sustainability.”

“Our environmental mission has been our sole driving force, but now we have taken a step back and realized that we cannot make the food system sustainable without addressing racism,” said Jessica Appelgren, Impossible’s VP of Communications.

For example: Diversity has been a buzzword for years, and has seen numerous companies promise to increase the number of people of color and women in their workforce in recent years. But nearly all have failed to meet their goals — and the problem is not lack of talent, but lack of cultural change within the company.

“There is no pipeline problem. There is more than enough talent to fill these organizations with diverse candidates,” said Philip McKenzie, a cultural anthropologist & founder of InfluencerCon — a global content platform that identifies and supports influencer culture globally. “There’s an unwillingness to change the structures to incorporate those people and identify those candidates.”

A key theme throughout Just Brands day one: What businesses have done so far should be seen as just the start. It’s the actions they take going forward that will define whether they are truly willing to address the legacy of systemic racism and inequity.

“Million-dollar donations, making a statement, investing [are] important first steps, but those are just first steps,” said Anthea Kelsick, Co-CEO for B Lab US & Canada. “Systemic racism will not be solved by these types of responses; we cannot dismantle a system centuries in the making by taking just a few steps.”

McClarty framed the DEI conversation in practical terms that all organizations can learn from:

“Diversity is a state, inclusion is an act — the end is equity. Center equity in the conversation, and use diversity and inclusion as a means of getting to equity.”