Collaboration
SB Oceans:
Can Better Business Save Our Seas?

Over the course of three action-packed days, the inaugural Sustainable Brands Oceans (14-16 Nov) in Porto, Portugal convened a stellar lineup of business leaders laser-focused on saving the ocean while there’s still time. Here’s what we learned from some of the practitioners and storytellers …

What's the media’s role in a sustainable ocean? 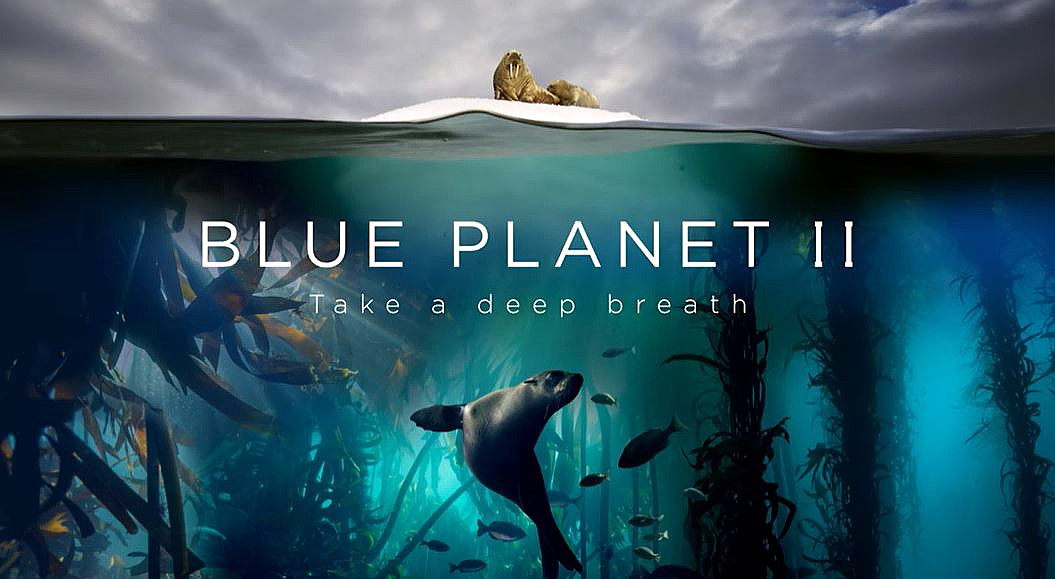 According to an analysis performed after the finale of BBC's "Blue Planet II,", there was a surge of interest in plastic recycling, with online searches for the term increasing by 55 percent; as well as a doubling of the number of searches for the dangers of marine plastic pollution. | Image credit: BBC Earth/YouTube

“You have to have enough tragedy to get people uncomfortable, but also enough inspiration so that people feel there is a pathway forward.”

“The plan was to bring the ocean back into everyone’s living room, through storytelling and jaw-dropping cinematography. But its power was that it was all hand-in-hand with scientists,” she said. “We were understanding our oceans and making discoveries during filming.”

Doherty is now taking her “Blue Planet II” experience into a collaboration between the BBC, OceanX and filmmaker James Cameron to produce a new series for National Geographic Channel that will follow pioneers, scientists, filmmakers aboard a specially adapted vessel, capable of making ocean discoveries like never before.

“’Blue Planet II’ showed the animals. What we are trying to do with this series is to show the humans coming face-to-face with the ocean, and how they react to what they see,” Doherty said.

Blathnaid Healy, EMEA Director at CNN Digital International, explained how CNN views its role: “Lots of CNN’s audience have never seen the ocean. Because of that, our role is to help bridge that gap, so that you can understand the function of the ocean wherever you live.

“The content we produce reaches millions and millions of people. Our audience is wanting to know what they can do. We’re trying to move the focus of our coverage to solutions, so that people can feel empowered that they have some role in the next decade,” she said.

Joe Ruffolo, Executive Producer at OceanX, said: “Our job is to tell these stories in compelling ways. We need to make it seem approachable and exciting.” 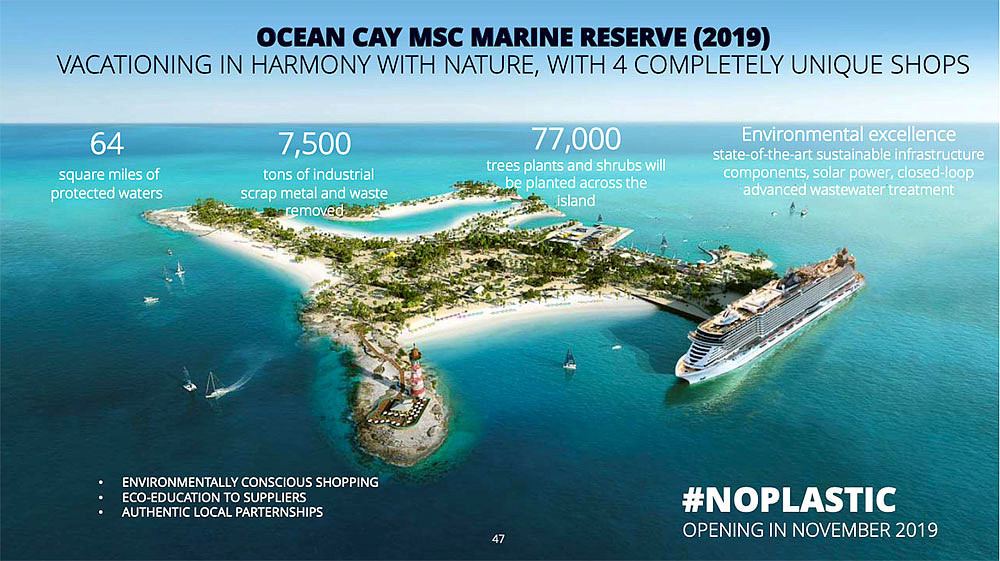 “The blue economy is not just this abstract thing that is coming in the future. It is here and now,” said Ruben Eiras, kicking off the evening plenary session on Day 2 of SB Oceans.

Eiras runs Portugal Ministry of the Sea’s Bluetech Accelerator, designed to help startups find the cash and the partners they need to bring their ideas for ocean conversation to reality. “We have just begun to explore the full potential of our oceans.”

It is a notion not lost on the two speakers that join Eiras onstage next. Tara Russell and Linden Coppell are leading the sustainability efforts for two of the world’s biggest cruise lines — Carnival and MSC (Mediterranean Shipping Company), respectively. Both companies will no doubt lean on the upcoming innovations the Bluetech Accelerator will champion as they look for innovative ways to reduce the impact of their ships once out on the ocean. Both have looked at ways to improve the drag and efficiency of their huge vessels as they make their way through the water. Both have looked at alternative fuels, such as biofuels and hydrogen fuel cell technology. And both have looked at engine components and the way they are being used to boost fuel efficiency.

But there is still a long way to go in making the cruise industry — which makes up a relatively tiny percentage of all sea-faring vessels — as responsible as possible. “There is a gap between what we can achieve now based on current technologies and fuel availability, and where we want to be,” Coppell told delegates.

Russell agreed, pinpointing the need for the world’s ports — where cruise ships spend a considerable amount of time — to be able to support efforts, from providing clean energy generation, to promising to keep the waste that has been segregated onboard in the same state before being recycled on shore. This is especially important to Carnival, as “waste has become a new form of wealth as we get even smarter in our operations on board.”

Cruise ships are like small cities on the sea, and have both a huge impact and a great opportunity to create positive impact — whether that’s in the energy they use or the products they sell within the hundreds of onboard retail units. But as Russell concluded, “there’s a real need for more collaborative solutions, where governments, businesses and funders can jointly achieve things much more quickly.” Watch this space. 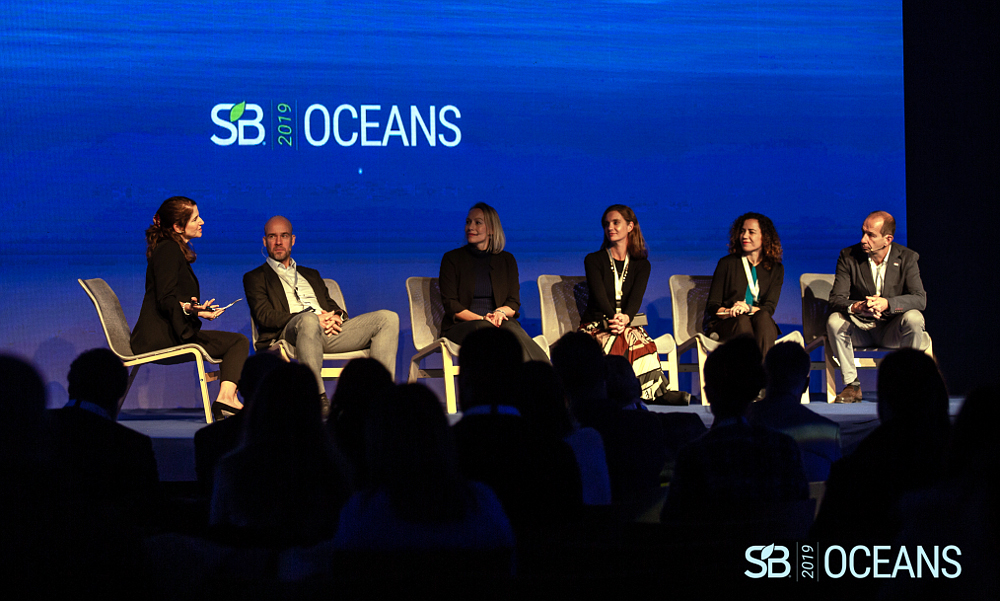 Retailers are playing a significant role in increasing the availability and consumption of sustainably sourced seafood, according to a panel of retailers, producers and sustainability standards on the final day of Sustainable Brands Oceans.

Christoph Mathiessen, Sustainability Developer at IKEA Food, said: “IKEA’s commitment in 2015 to only sell ASC-certified salmon — as part of its People & Planet Positive sustainability strategy — massively increased awareness of the standard, and now 30 percent of all salmon is ASC-certified.”

How did IKEA, a furniture business, make such an effect on seafood? “If you stay invested in your brand, stay committed to sustainability and make it central to your brand, then you can have a strong impact,” Mathiessen explained.

In the past, retailers had to educate consumers on the benefits of sustainably sourced seafood. But that is now changing, according to Vanessa Romeu, Director of Corporate Communication at Lidl Portugal. “A new wave of consumers has become very aware of the topics of sustainability and oceans, and are now looking for these products,” she said.

With new technology, such as BioMar’s Discover tool, anyone can now find a whole host of information about their fish purchases. “People want to have access to the information themselves to make decisions,” Bryar said. “Using QR codes, consumers can make their own decisions and don’t have to rely on the sustainability standard or retailer to make that decision for them.”

There is, however, a fine line between transparency and too much information. “We have a billion customers a year coming into our stores. They want sustainability but they don’t want to spend time on it,” Mathiessen argued. “More transparency is good, but it is not what consumers spend their time on. You have to build trust that the brand is answering these questions.”

With a focus on responsible sourcing, Arnault Chaperon from Pirinea — a French fish farmer in the Pyrenees — has seen a change in retailers’ priorities. “We are definitely at the end of a cycle,” he said. “Previously, each year retailers tried to buy more at a lower price. Now they want to buy sustainably, and we see a change in negotiations with retailers.”

In fact, the Marine Stewardship Council (MSC) encourages retailers to work with their existing suppliers to improve their sourcing. “The idea is to work with your own supply chain to transform and engage them to use sustainable practices, not to change to new suppliers,” explained Laura Rodriguez, Programme Director for MSC Spain and Portugal.

This brave new world sees retailers and suppliers working together to meet the needs of the sustainability-savvy consumer. 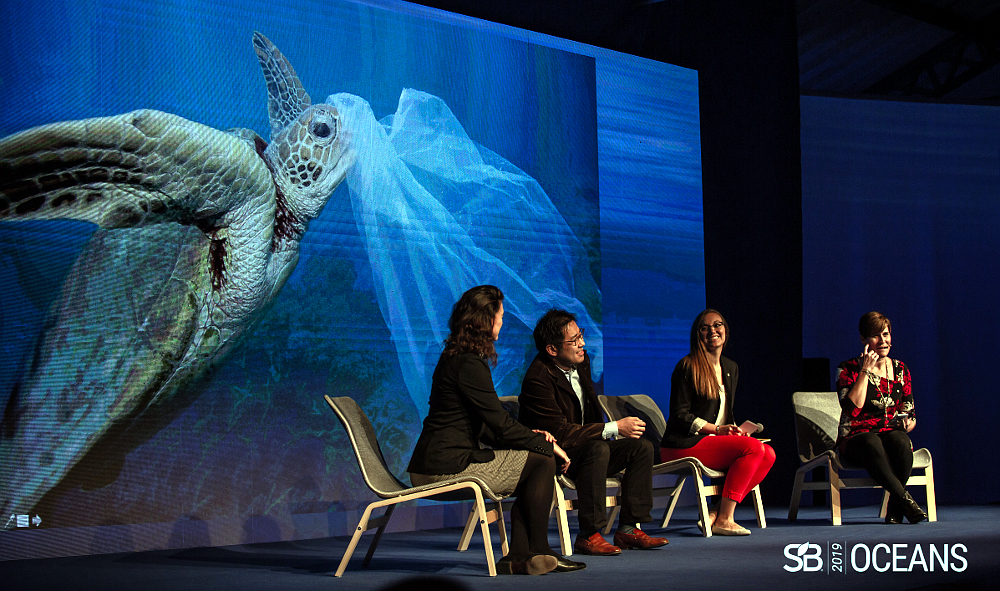 The hot-button sustainability topic of the decade was once again dominant at the opening of Day 3 of SB Oceans.

This time, the discussion focused on the role of collaboration in stopping ocean plastic waste — and, in particular, how companies can best work with NGOs and non-profits to make an impact.

“Plastic waste in our oceans is a truly unifying issue, and there is real energy and momentum around solving this urgent crisis,” said Erin Simon, WWF’s Director of Sustainability R&D. There was agreement across the on-stage panel — with representatives from National Geographic, The Coca-Cola Company and the World Economic Forum — that the systemic nature of the challenge will only be solved by a coming together of private and public sectors, as well as civil society groups.

Right now, examples of collaborative efforts to solve the plastic waste problem are thin on the ground.

Taylor Maddalene, Director of the Plastics Initiative at National Geographic Society, the non-profit arm of the organisation, reinforced the need for powerful storytelling: “Corporations are trying to keep up with expectations on this issue — and we can help them navigate that.”

She also pointed to the Ocean Plastic Innovation Challenge, part of Nat Geo’s Planet or Plastic? initiative that is supporting a wider accelerator program for those with “unique skillsets to push innovation”.

Elsewhere, Kristin Hughes, Director of the Global Plastic Action Partnership at the World Economic Forum, said that Coca-Cola and PepsiCo’s recent decision to put their rivalry aside for the Every Bottle Back initiative shows what can be achieved when companies work together.

“There is a big risk to inaction on this challenge — not just for society but for our business, too,” he said. “When we make commitments on plastic waste, they are not plucked out of thin air. We know we can’t solve this challenge on our own — and setting aspirational goals that we don’t yet know how to meet underscores the need for us all to work together.”

Maddalene concluded the session by stressing the need for measurable outcomes. ”To keep up the momentum, we need to all understand what success looks like. There is still a criticism that company commitments are not going far enough. So, companies will need to better articulate success, as well as pointing to the challenges that remain.

“Longer term, we will all need to keep messaging on plastic pollution right in front of consumers, and make it fresh and relevant. This is a global issue that is both visible and sticky, because it touches people every day.

“But we have an opportunity to drive change, every time somebody spends their money.”