Marketing and Comms
Campaigns from Fridays for Future, Universal Music Group Aim to Usher Young Voters to the Polls


Published 3 weeks ago. About a 7 minute read.
Image: Fridays for Future US

Fridays for Future reminds US voters about the real existential threat to our planetary health, while UMG launches new installments of its ‘Use Your Voice’ and ‘Pull Up to the Polls’ initiatives to support voter education and to help get young people to the polls this week.

Image credit: Fridays for Future US

Ahead of the 2022 US midterm elections tomorrow, Fridays for Future US — the US contingent of the climate movement inspired by Greta Thunberg — has asserted that we shouldn’t fear aliens, as the Earth’s greatest threat is far closer than we may think.

The hypothetical threat of malicious foreign invaders destroying the Earth has been the plotline for numerous successful movies and TV shows, and the throughline for countless conspiracy theories over the last 50+ years. And while it could be argued there’s evidence of extraterrestrial life, we alone pose the direst threat to our planet — from anti-environment legislation and a lack of federal regulations to ongoing, rampant deforestation devastating our natural ecosystems globally, it’s clear that humans are far more dangerous to the future of our planet than aliens could ever be.

With this week’s midterm elections taking place amid the reality that 139 elected officials in Congress still deny the scientific consensus of human-caused climate change, Fridays for Future US has released “Aliens” — a four-part poster series powerfully illustrating that our fears of deadly alien invasion are the least of our concerns. Whether it's the denial of climate change or the lack of action to address it, the most fearsome “aliens” are already destroying our planet — one local election at a time.

This new campaign marks the 7th collaboration between Fred & Farid Los Angeles and Fridays for Future. Utilizing retro sci-fi motifs, “Aliens” depicts four different environments under attack by humans who look eerily similar to aliens attacking a foreign planet: Men in futuristic suits chop down trees with abandon, with machines aiding in the devastation; business people flee from ominous smog clouds that engulf the sky as gas guzzling cars fill the air with fumes; a giant fishing boat with nets bursting with fish and bycatch splits the sea like a monster; and fires rage from the Earth as humans and massive rigs drill for oil.

Between a lack of meaningful federal regulation in the US and an ongoing lack of political motivation on a global level (time will tell if COP27 will have any significant impact on this front), educating the public about the current state of the Earth and the environment and taking action has never been more crucial.

“Every election is a climate election. The midterms will decide Congressional action on the man-made climate crisis for the foreseeable future,” says Fridays for Future US Policy Director Liv Schroeder. “Americans across the country are watching our seas rise, our houses burn, and our air thicken with smoke. It’s time to elect climate champions who will represent their constituents and fight for our people and planet.” 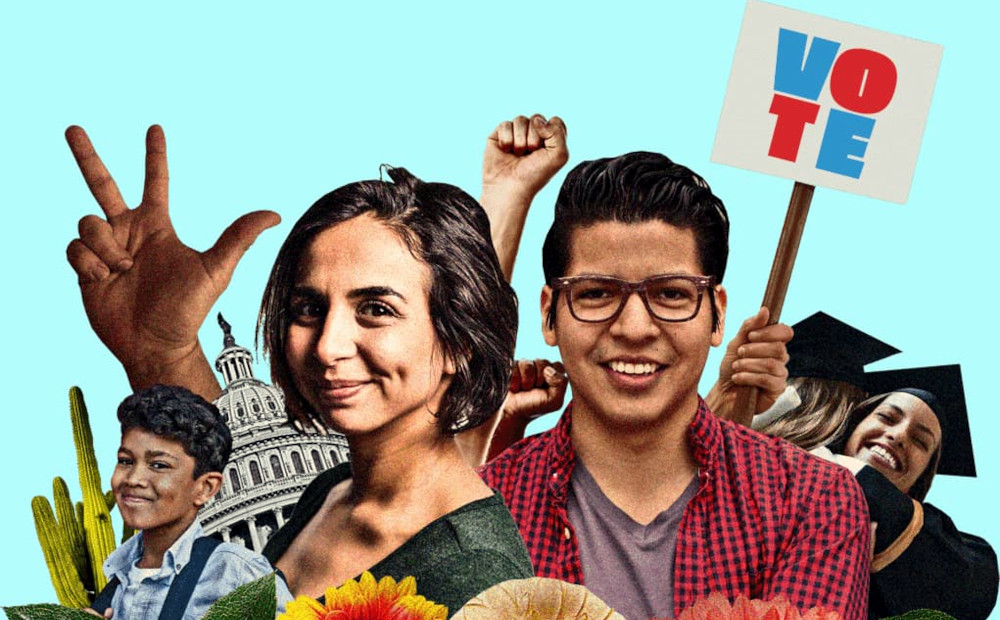 Meanwhile, Universal Music Group (UMG) has launched a voter-engagement initiative spearheaded by its Universal Music All Together Now Foundation and its Task Force for Meaningful Change — a group of employee volunteers dedicated to instituting meaningful change. The initiative features new and updated installments of the "Use Your Voice" voter registration and education program, as well as the Task Force for Meaningful Change's "Pull Up to the Polls" voter transportation components.

In addition, UMG announced that its US offices will be closed on election days moving forward to facilitate employees' voter participation and election day volunteer activities.

"Universal Music Group, through its Task Force for Meaningful Change and the Universal Music All Together Now Foundation, works towards meaningful positive change by partnering with organizations and tapping our passionate network of artists and music lovers to join together for a common cause,” said Susan Mazo, UMG's EVP of Corporate Social Responsibility, Events and Special Projects. “We are proud to work with our partners both internally and externally to ensure all eligible voters have the resources they need to cast an informed vote."

A campaign spanning UMG's US businesses aimed at supporting voters across the country, this year the "Use Your Voice" campaign built purposeful partnerships and activations with organizations working to prepare voters to cast their ballots, including:

"HeadCount is so grateful to UMG for their continued support alongside some of the world's biggest artists. Encouraging young people to use their voice is imperative to our democracy and can make a true difference in this critical midterm election year," says Lisa DeLuca, Sr. Director of Artist Relations.

Pull Up to the Polls

Created in 2020 by UMG's Task Force for Meaningful Change, Pull Up to the Polls is a partner-centered voter-engagement campaign aimed at supporting marginalized voters around the country through voter education and resources that help get eligible voters to the polls. This year, Pull Up to the Polls has partnered with Voto Latino, NAACP and YMCA:

"Voting is an essential component to promote a free and fair democracy that gives every individual the right to address their policy interests and concerns, particularly for marginalized communities disproportionately challenged with the opportunity to vote," said Dr. Menna Demessie, SVP and Executive Director of the Task Force for Meaningful Change. "It's vital that we provide solutions for any barrier that prevents someone from voting, particularly transportation, which is also a logistical hurdle for many working-class voters. We're grateful to our partners for providing rides to the polls to ensure everyone gets to vote."