The Urban Food Forest at Browns Mill caters to one of 35 food-insecure communities in Georgia’s capital — and provides a scalable model for other cities to begin to address this all-too-common systemic inequity in US cities.

Atlanta, Georgia is on a mission to address food insecurity for its residents. Part of this mission includes the development of the country's largest free food forest, stretching for 7.1 acres, and hosting 2,500 pesticide-free medicinal and edible plants.

A food forest is a multi-layered ecosystem containing edible plants that mimic the processes and patterns that take place in nature. It allows for a diverse ecosystem, whilst also providing food and produce for residents in surrounding areas. Atlanta is now hosting the biggest one in the country, providing food and nutrition education for the roughly 6,600 residents of the Browns Mill neighborhood.

“It’s more than a place for food; people are able to learn here, to understand about nature and urban agriculture, and the important role of both whilst maintaining a healthy mind and body,” says Celeste Lomax, an herbalist, and Food Forest Steward and Community Coordinator with Trees Atlanta.

Originally a pecan farm, the food forest was sold to developers with plans to turn it into townhouses. Due to the recession in 2008, the deal fell through, leaving it abandoned — until the Conservation Fund purchased it in 2016. It was previously illegal in Atlanta to grow food on residential lots; however, in 2014, an ordinance was passed that permitted urban agriculture, which helped pave the way for the food forest’s development.

The push towards urban agriculture is a vital step for the health and wellbeing of the people of Atlanta. Currently, in the perimeter of Metro Atlanta, there are more than 35 food deserts —regions, typically in urban communities, where the residents have limited access to healthy, affordable food (Lomax told Allrecipes that the nearest grocery stores are 5-6 miles away from Browns Mill). In densely packed areas, there is often an unfair disparity between people with easy access to fresh produce and those without. And those without tend to rely on food from convenience stores and fast-food chains for sustenance, leaving them vulnerable to health-related illnesses. As with many social injustices in the US, these disparities disproportionately affect BIPOC communities — which, due to decades of discriminatory practices such as redlining, have subsequently become the most vulnerable to poor-quality food, hunger, obesity, and other health-related problems.

Before COVID-19, the statistics in Georgia showed that 1 in 8 people experienced food insecurity, as well as 1 in 16 children, and 1 in 13 seniors (aged 60+). The pandemic has exacerbated these statistics further. The Atlanta Community Food Bank has seen a 300 percent increase in inquiries from people seeking food assistance; and it has distributed 30-40 percent more food each week than in the same period before the pandemic.

Enter the Urban Food Forest at Browns Mill, which was conceived as part of Atlanta's broader mission to bring healthy food to 85 percent of its residents by 2022. The forest received a grant from the US Forest Service’s Community Forest Program and partnered with Trees Atlanta to aid in its development. Since officially opening, the Food Forest offers Browns Mill residents fresh, seasonal food; and an education into both agriculture and sustainability. 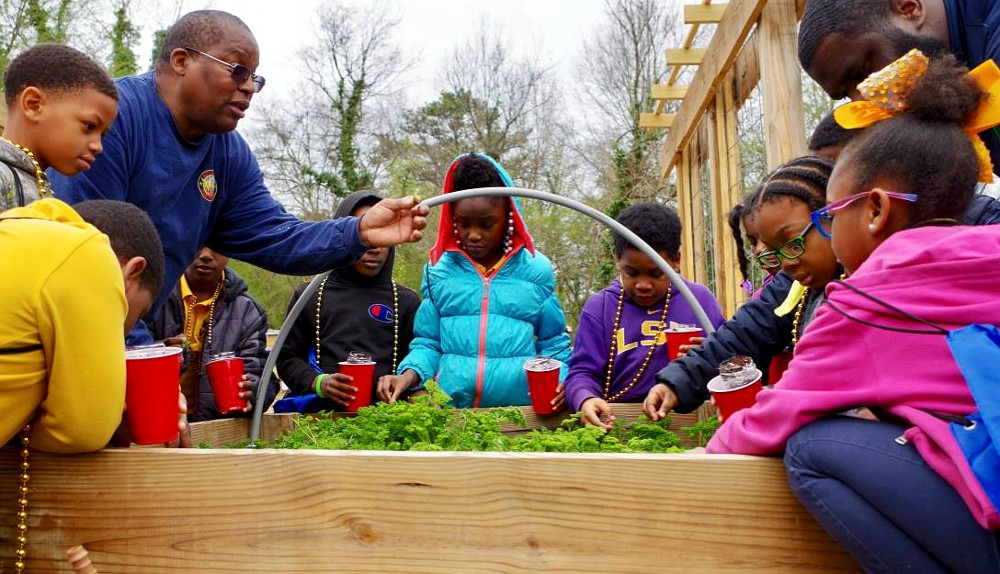 “We are delivering around 40 boxes of food to people in the community a week, with each box weighing about 40 lbs — amounting to 1,600 pounds of food per month to the immediate community,” Lomax says. “We harvest on Friday and put whatever we harvest into these boxes. We also give harvested food to volunteers; and anyone who comes, asks.”

Lomax also points to a popular program that connects the children in the community to growing food and educational classes on the benefits of culinary herbs, composting, pollination with bees, and bat boxes and the benefits of having them: “The children love this space.”

“I have been part of this community for 10 years now, and the community really appreciates what the forest is doing for the people who live in the neighborhood. It is time for us to heal, and the forest is allowing us to do that both physically and mentally.”

But, as with supermarkets, the stock only runs so deep. So, while Browns Mill’s Urban Food Forest is a model for how other communities could address food insecurity, this forest alone is not enough to solve food insecurity at scale — with the organizers having to stress that their nutritional services cannot stretch further than the residents that the forest intends to support.

Food forests are a promising potential solution for the estimated 23.5 million low-income people living in food deserts across the US. By educating people about their diets and the possibilities of urban agriculture, the Urban Food Forest at Browns Mill is offering a solution that contributes to biodiversity and the health and nourishment of its underserved urban community.