Sustainable Brands
Published 2 years ago. About a 9 minute read.

It’s a tough time to be a plastic straw producer. Over the past few months, it seems the message has broken through that plastic straws are harmful to the environment – and marine life in particular – that phase outs and bans are warranted. From a proposed ban across the EU to corporate commitments from Hilton, McDonald’s, Just Eat, Deliveroo, supermarkets and numerous CPG giants in the UK, efforts to eliminate plastic straws and other single-use plastics have been mounting with no signs of slowing down.

World Oceans Day (June 8) prompted several new commitments, including an agreement between five of the G7 countries to reduce plastic waste in oceans. The Ocean Plastics Charter was endorsed by Canada, France, Germany, Italy, Britain and the European Union but declined by the U.S. and Japan at the G7 leaders’ summit in La Malbaie, Québec, Canada. The pact calls for signatory countries to reduce the use of plastics and, where alternatives are not available, find ways to include more recycled materials in the plastics they do use.

“This is good news not only for the environment, but also for businesses, who can stand to benefit from reducing the costs associated to plastic use,” Canadian Prime Minister Justin Trudeau told reporters. For its part, Canada has committed to invest CAD $100 million to reduce marine plastic pollution.

The Charter is a non-binding, voluntary agreement, resulting in criticisms from environmental advocacy groups such as Greenpeace and Environmental Defence that it does not go far enough to address the issue.

Industry associations, on the other hand, offered their full support. The Canadian Plastics Industry Association (CPIA) and Chemistry Industry Association of Canada (CIAC) announced its members had committed to goals of 100 per cent of plastics packaging being recyclable or recoverable by 2030 and 100 per cent of plastics packaging being reused, recycled, or recovered by 2040. The goals align with those of the American Chemistry Council (ACC), announced last month.

IKEA plans to stop selling single-use plastic products in the stores and remove them from its restaurants globally by 2020. The phase out, which will include products such as straws, plates, cups, cutlery and garbage bags, was announced following the release of the EU’s proposed ban on certain plastic items. This commitment against single-use plastics and the introduction of more non-meat food choices in its restaurants are part of IKEA’s broader, updated “People and Planet Positive by 2030” sustainability strategy. Other goals include to purchase 100 percent renewable energy by 2020, achieve zero emissions on deliveries by 2025 and start using only renewable and recycled materials in its products.

“Becoming truly circular means meeting people’s changing lifestyles, prolonging the life of products and materials and using resources in a smarter way. To make this a reality, we will design all products from the very beginning to be repurposed, repaired, reused, resold and recycled,” said IKEA sustainability manager Lena Pripp-Kovac.

RB announced a series of commitments on the use of plastics, including to make 100 percent of its packaging recyclable or reusable and include at least 25 percent recycled plastic content in its packaging by 2025, where possible and where regulations allow. The company has operations in over 60 countries, managing household brands such as Enfamil, Gaviscon, Durex, Scholl, Clearasil, Lysol, Veet, Finish, Vanish, Woolite and Air Wick. RB says it will use “best-in-class labeling to help consumers recycle effectively” and work with peers and governments to enable products in our health portfolio to meet its new targets for plastic without compromising their safety and efficacy for patients and consumers.

“Plastic has proved itself one of the most versatile materials ever invented. Unfortunately, one of the unintended consequences of its widespread use is that it causes enormous environmental damage if not appropriately reused and recycled. For many years, we have been reducing our packaging as much as possible and eliminating waste through innovation. We recognise we need to do more,” said RB Chief Executive Rakesh Kapoor. “Responsibility is at the heart of our values, as without it we will not deliver on our corporate purpose of healthier lives and happier homes.”

A&W Canada became the first quick service restaurant chain in North America to commit to eliminating all plastic straws from all restaurants by the end of this year.

A&W will provide guests with the option of a paper straw. The company explained that the paper straws are 100 percent biodegradable, compostable, are sustainably sourced and last 2-3 hours in a drink without breaking down, but naturally biodegrade in 3-6 months in the environment. A&W expects the switch will keep 82 million plastic straws out of landfills every year.

“Eliminating plastic straws is another big step for us. As we learn more about new tools and sustainable practices, we look forward to more improvements ahead,” Pronyk added.

“Moving so quickly to remove black plastic is a significant challenge, but one that, as a sustainable company, we view as being of the utmost importance,” said Quorn Foods CEO Kevin Brennan, noting that the company was a founding signatory of WRAP’s UK Plastic Pact. “We view this as the right thing to do, despite the six-figure cost.”

“We’ve seen first-hand the horrific damage that plastic pollution causes to animals,” said Jon Peterson, manager of rescue operations at SeaWorld Orlando. “Some studies have indicated that more than half of sea turtles out in the wild ingest some form of plastic. In fact, just this week, we performed surgery on a rescued sea turtle who became ill from ingesting plastic and other ocean debris.”

Meanwhile, commitments and bans against single-use plastics are also being complemented by product and packaging improvements, such as by incorporating more recycled content, using plastic-free alternatives and forging partnerships.

American Express has announced plans to do both through a partnership with Parley for the Oceans: it is committing to reduce the use of single-use plastic within its operations globally; and will launch an American Express Card made primarily from upcycled marine plastic debris. The Card is currently a prototype and will be tested and refined over time with public availability anticipated in the next 12 months.

“Our oceans play a vital role in our lives, the health of our planet and the health of travel and tourism, which American Express has long supported. It’s important that we raise awareness and do our part to keep our oceans blue,” said Doug Buckminster, Group President of Global Consumer Services at American Express. “Partnering with Parley is the right next step as we pursue our larger vision of backing our communities and sustaining the planet we share.”

“Every second breath we take is created by the oceans. Without them, we can’t exist,” said Cyrill Gutsch, founder of Parley for the Oceans. “American Express is creating a symbol of change and inviting their network to shape a blue future, one based on creativity, collaboration and eco-innovation.”

MARKETING AND COMMS
2 Dope Boys & a Podcast: How to Avoid Brand 'Eff Ups' and Cultural Misalignments

CLEANTECH
Q&A: How Schneider Electric’s NEO Network Is Shaping the Future of Renewables in Europe 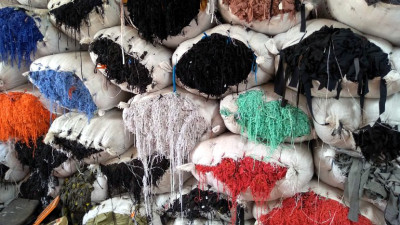