Published 1 month ago. About a 7 minute read.
Image: Shawn Craig

By celebrating the growers behind popular chocolate and tea brands, the murals remind the public to ‘Choose the world you want’ by supporting products and brands that help give farmers a sustainable livelihood.

In honor of October as Fair Trade Month, Fairtrade America has launched its third annual ‘Choose Fairtrade. Choose the world you want.’ campaign to generate broader awareness of how a simple everyday action — choosing a Fairtrade-certified product — can ensure we are properly supporting the people who grow our food.

Fairtrade America and National Co+op Grocers are closing the gap between US shoppers and the nearly 2 million Fairtrade farmers and workers around the world through new murals in three major US cities — Atlanta, Milwaukee and Portland. The murals will connect the stories of the people who produce the goods we enjoy every day — in this case, cocoa and tea — to the positive impacts of Fairtrade. Launched in 2020, the campaign has so far brought inspiring murals to Austin, Denver, Los Angeles, Minneapolis, Nashville and Tacoma.

Fairtrade America partnered with notable mural artists and key retailers in this year’s three cities, where mural art is already a prominent part of the culture. This year, all three murals will feature women farmers and raise awareness of several key areas of impact for Fairtrade — including promoting gender equality and building resilience to climate change. This campaign is more important than ever as farmers face inflation, worsening climate change and lingering effects of COVID-19. Without intervention, studies show by 2050 as much as 50 percent of the global surface area currently used for coffee farming may no longer be available, many cocoa-growing regions will become too hot to grow cocoa and adverse climate conditions will trigger a drastic decline in banana yields.

“Now, more than ever, we must all do our part to prioritize a fairer deal for farmers,” said Kate Stritzinger, director of marketing & external relations at Fairtrade America. “With these stunning mural portraits of Fairtrade farmers, we hope to remind people across the US that every trip to the grocery store is an extraordinary opportunity to choose the world you want. Business leaders and shoppers alike have an incredible chance to choose a world where the people who grow the food we use and enjoy every day get a fairer deal on their goods.”

Fairtrade is an alternative approach to trade based on partnership instead of exploitation, a partnership between those who grow our food and we who consume it. The producers featured in the murals represent millions of farmers in the Fairtrade system who produce their goods following Fairtrade’s rigorous economic, social and environmental standards. Fairtrade’s model includes a Premium that farming organizations receive on top of the price of the product. Members vote to determine how the money is spent — typically investing in farm improvements or community programs such as increasing access to education or healthcare. In 2020, Fairtrade farming communities earned more than $204M in Fairtrade Premium in the top seven commodities alone.

Stritzinger shared evidence that points to the success of the murals campaign to date.

“We have seen both local market and national impacts from efforts like the ‘Choose Fairtrade. Choose the world you want.’ campaign, and our ongoing work to increase awareness of and demand for Fairtrade certified products in the US,” she said via email. “By weaving together the stories of farmers and beautiful artwork, we’ve been able to expand the number of people who are aware of Fairtrade and have opted in to be connected with Fairtrade.

“According to our Fairtrade Consumer Insights report, conducted by GlobeScan, in 2019, 28 percent of Americans recognized the Fairtrade Mark. In 2021, 41 percent of Americans recognized the Mark — showing growth of almost 50 percent. Furthermore, trust in the Mark has also increased with 57 percent of Americans agreeing they trust the Mark, up 48 percent from 2019,” Stritzinger continued. “While this study was not specific to just our campaign, we believe it — along with our other work aimed at increasing awareness and demand for Fairtrade-certified goods in the US — has driven these increases. In addition to awareness and trust growth, since the inception of this campaign, our subscriber base has grown by nearly three-and-a-half times.

“Lastly, our participating retailers are reporting back results in their markets — in the first year of the campaign, one of the retailers reported a 10 percent increase in sales YoY on Fairtrade-certified products,” Stritzinger added. “Last year, one of our mural stores shared that sales of the product connected to their mural grew by 500 percent YoY during Fair Trade Month.” 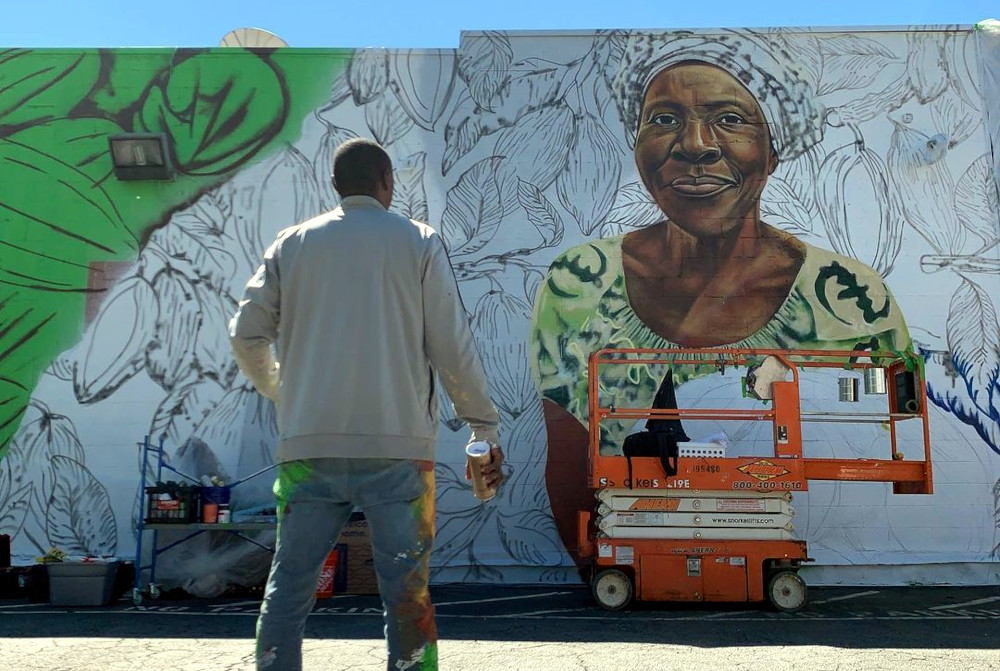 In Atlanta, Fairtrade America partnered with Sevananda Natural Foods Market — a vegetarian natural foods grocery store dedicated to offering food with integrity — to create a mural featuring Fairtrade cocoa farmer Agnes Senesie. Local artist Muhammad Yungai portrayed Senesie, a member of the Liloma Agricultural Cooperative Society, Ltd — a Fairtrade-certified cocoa cooperative in Sierra Leone. Senesie inherited her cocoa farm after her husband died during the Sierra Leone civil war. To diversify her income and help pay for the intensive labor required for cocoa production, Senesie grows potatoes and vegetables in the off season. Yungai’s mural is inspired by Senesie’s strength and determination to persevere. Some of the cocoa grown by Senesie’s community is used to make a variety of Fairtrade-certified items — including Navitas Organics Cacao Powder, Cacao Nibs and Cacao Butter (all available for purchase at Sevananda). 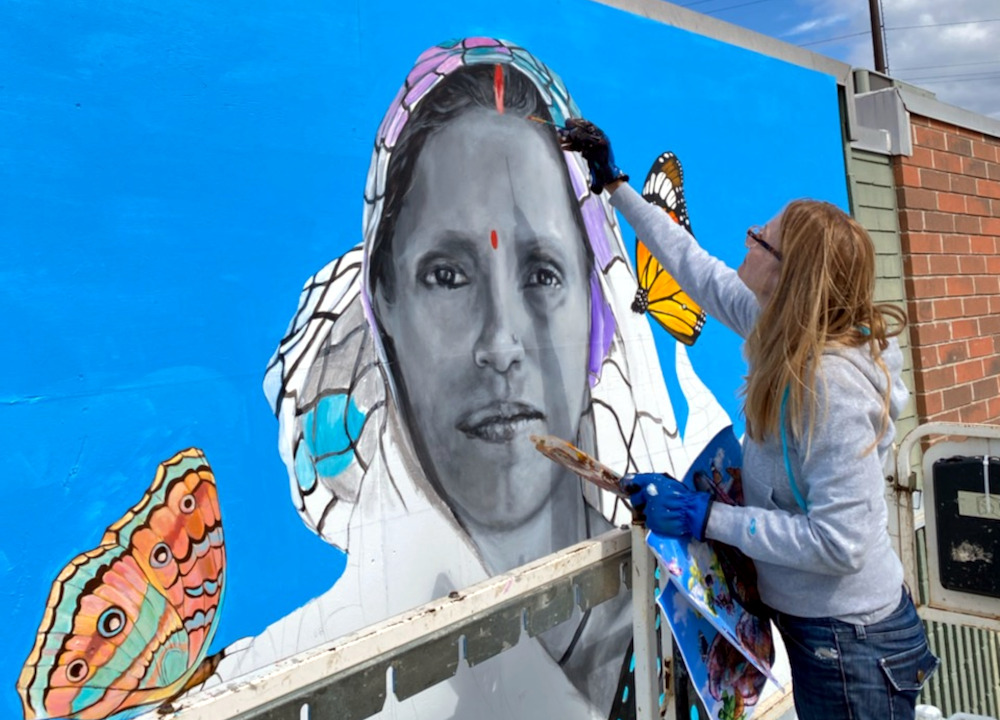 Outpost Natural Foods — a natural food and organic co-op founded more than 50 years ago that helped make Milwaukee the first Fair Trade City in the US — is home to the new mural by local artist Nova Czarnecki, celebrating Ranjana Maurya. After growing up in Mumbai, Maurya returned to her ancestral Haripur village of Azmargh with her husband, Arjun, who was a farmer. At the time, many grew wheat, rice, peas and gram through conventional farming methods — which can involve a lot of chemical pesticides. After Arjun was injured, Ranjana had to take over her family’s agricultural activities, starting with 1.4 acres. She began growing organic Holy Basil (Tulsi) and joined the Organic India Farmer Producer Company Limited. Since then, Arjun and Maurya have continued their organic farming techniques and diversified their business to include raising dairy cows and growing other crops, including wheat and corn. By converting to organic practices, Ranjana and her community earn a higher Fairtrade Minimum, along with a Fairtrade Premium, that they can invest in initiatives that are meaningful to their communities. Tulsi Holy Basil, grown by Organic India-partnered farmers including Ranjana, is the base of Organic India teas and infusions (available at Outpost Natural Foods). 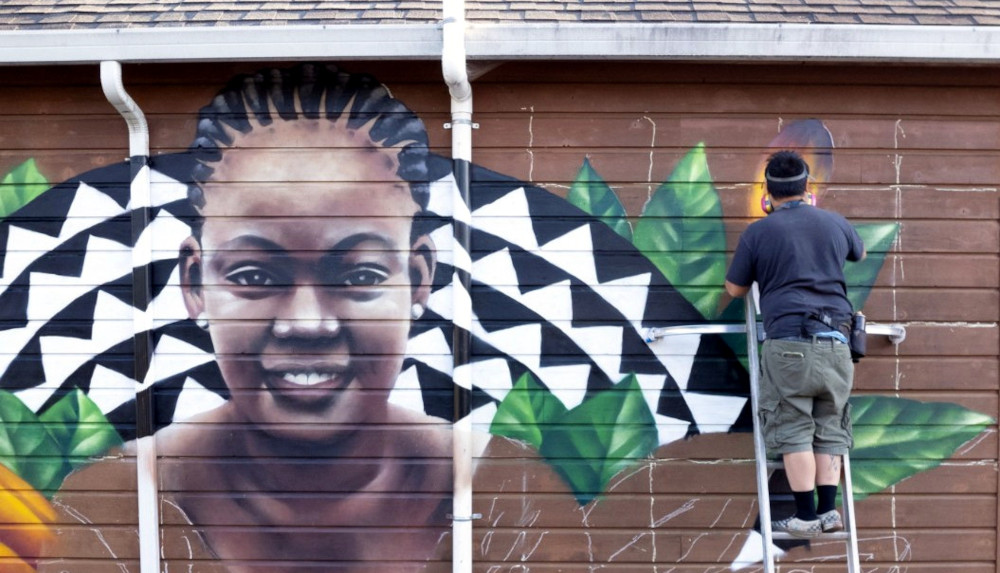 The Portland mural is located at the People’s Food Co-Op — an influential, Pacific Northwest co-op known for cultivating strong relationships with the food we eat and the people who produce it. Portland mural artist Alex Chiu captured Deborah Osei-Mensah — a Ghanian cocoa farmer, Fairtrade youth ambassador, climate advocate, livelihood development officer of Ghana’s Asunafo North Farmers Union and leader of the union’s monitoring and evaluation team. Alex is honored to paint Osei-Mensah’s portrait and bring attention to the great work that she does. As a father of two girls, he hopes that his kids will also strive to make a similar positive impact on their community. Some of the cocoa grown by Osei-Mensah’s community is used to make a variety of Fairtrade-certified products, including Tony’s Chocolonely chocolate bars (available at People’s).

“It is essential that we make choices that will create an environment where farmers can thrive, not just survive,” Stritzinger urges. “We hope these murals help connect people across the US to the real people behind our food and provide motivation to choose the world we want.”

In addition to the murals, Fairtrade will offer a giveaway in October where three winners will receive a compelling prize package for showing their support of Fairtrade — visit choosefairtrade.org to learn more and participate in the giveaway.